Accrued expenses are expenses that have been incurred (i.e., whose benefit or services have already been received) but which have not been paid for.

An alternative definition of accrued expenses is that they are expenses that have been incurred but not recorded, necessitating adjusting entries and the inclusion of items such as interest expenses, salary expenses, and tax expenses.

Most businesses record expenses in their books of accounts only when they are paid. For example, the first accounting entry to record an electricity expense is made not when an electricity bill is received, but when it is paid.

Thus, in most cases, the balances on expense accounts such as electricity, telephone, and wages, as shown in the year-end trial balance, represent the amounts actually paid out during the year.

It is common for bills to be received after the end of the year, which actually relate to a service received before the year-end.

The trial balance will, of course, have no record of the bill, and yet it would be wrong to ignore the expense involved when preparing the year’s profit and loss account.

Accrued expenses include items such as interest expenses, salaries, tax expenses, rental expenses, or any other expenses incurred in one accounting period that will be paid in subsequent periods.

Adjusting entries must be made for these items in order to recognize the expense in the period in which it is incurred, even though the cash will not be paid until the following period.

Like accrued revenues, the accrued expenses occur continuously. However, to simplify the accounting process, they are recorded only at the end of the accounting period. This is performed by recognizing an accrued payable and a corresponding expense item.

Consider the example of Mr. John, a wholesaler. Mr. John installed a telephone in his shop in August 2019. He received the following bills:

The bill for December had not been received by 31 December 2019 when the ledger was balanced and a trial balance extracted. The telephone account, therefore, showed a Dr. balance of $3,460 (as above).

After the trial balance had been drawn up, the December bill arrived, which was for $870.

Even though the December bill has not been recorded in the books, the fact is that the service has been received, and hence expenses incurred.

Secondly, there also is the fact that despite the absence of a disclosure in Mr. John’s trial balance, on 31 December 2019 he owes $870 to the telephone company for services that have already been consumed.

It follows, therefore, that Mr. John’s trial balance must be adjusted for two details:

The accounting entry required to bring accrued expenses to books is:

With the amount of accrued expense in Mr. John’s Case, the journal entry would be:

The effect of the above journal entry would be twofold:

For example, suppose that on 1 July 2019, Dogget Company borrowed $10,000 from a local bank. Both the principal and interest are payable in four quarterly installments, beginning on 1 October 2019.

The series of journal entries through 2 January 2020, including the 31 December 2019 adjusting journal entry, is given in the table below. 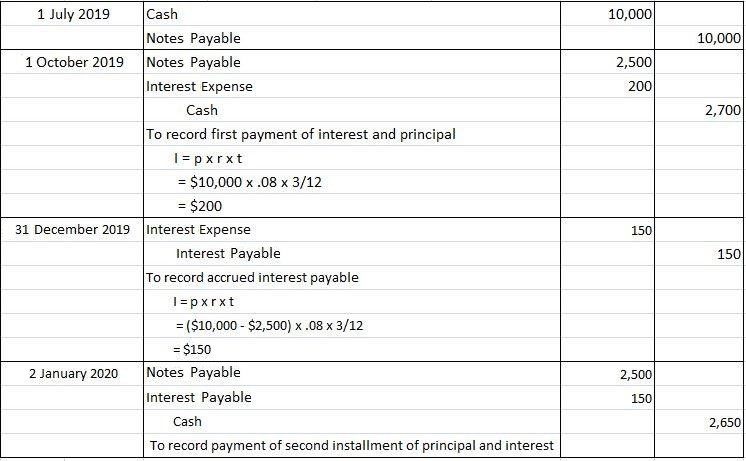 In the above example, the note and the interest are paid quarterly. The interest is based on the previous outstanding principal balance of the note.

Finally, the journal entry on 2 January 2020 reflects the second payment of principal and interest.

Salaries expenses are another example of accrued expenses for which adjusting entries are normally made. An adjustment is necessary because the date that the salaries are paid does not necessarily correspond to the last date of the accounting period.

Therefore, accrued salaries payable must be recorded for salaries earned by employees but that are unpaid through the end of the accounting period.

For example, suppose that a firm pays its salaries every Friday for the workweek ending on that day.

For simplicity’s sake, also assume that the firm began operations on Monday 2 January 2017. The first payday of the year was Friday 6 January 2017 and the weekly salaries total $1,500.

After the last full week of the year on 28 December 2017, the salaries T account appears as follows:

Since the payday for the week beginning Monday 31 December 2017, is not paid until Friday 4 January 2018, it is necessary to make an adjusting entry to accrue salaries through 31 December 2017.

The timeline below shows the total amount of salaries expense for the week ended Friday, 4 January 2018. It also indicates how much expense should be allocated between the two years.

Finally, the adjusting journal entry on 31 December 2017, along with the entry to record the payment of salaries on 4 January 2018, is given below with T accounts.

What is the purpose of accruing expenses?

The purpose of Adjusting Entries to accrue an expense is to recognize an expense as it occurs. The sum of all such adjustments for a period represent the total amount of expenses accrued by a company.

Why are accrued interest and salary expenses often not recorded until after the end of the accounting period?

Interest and salary expenses are accrued because the date that these items are paid does not necessarily correspond to the last day of the accounting period. For example, interest is often paid on a monthly or quarterly basis, while salaries are normally paid at regular intervals for work completed within the given period.

What is an asset used in accruing interest expense?

The asset used in accruing interest expense is a note payable. A company records an increase in this liability each period as the amount of accrued interest increases.

What is an adjusting entry for accrued salaries expenses?

What is the process for recording accrued interest expense?