Accounting for Bills of Exchange

Accounting for bills of exchange starts when the drawer draws a bill and the drawee accepts it. The drawee returns the bill to the drawer after accepting. Now, the drawer is the holder of the bill.

Once the drawer is the holder of the bill, they can use the bill in several ways:

The drawee is liable to meet the drawer’s acceptance, but sometimes they fail to do so and dishonor the bill.

Accounting for bills of exchange involves making journal entries and preparing ledger accounts in the books of the drawer and drawee. It is better to learn about journal entries under each of the above cases, after which a detailed accounting treatment will be given.

Journal Entries for Bills of Exchange

1. When goods are sold and purchased

2. When the bill is drawn and accepted

A. When Drawer Holds Bill Until Due Date (Option 1)

3. If the bill is honored on due date

4. If the bill is dishonored on due date

B. When Drawer Discounts Bill (Option 2)

5. When the bill is discounted

6. If the discounted bill is met on due date

7. If the discounted bill is dishonored

C. When Bill Is Endorsed to Third-party Endorsee (Option 3)

9. If the endorsed bill is met on due date

10. If the endorsed bill is dishonored

D. When Bill Is Sent to Bank for Collection (Option 4)

11. When the bill is sent for collection

12. When the bill sent for collection is met

13. If the bill sent for collection is dishonored

Sometimes, the drawee pays the bill before the due date and receives a rebate. This is known as retirement of the bill.

In other cases, the drawee may ask the drawer to cancel the bill and draw another bill for an extended period. This is known as renewal of the bill. The drawee pays an additional amount as interest for the extended period.

Journal entries under these cases are as follows:

14. If drawee retires the bill (drawee pays the bill before due date), bill is with drawer

15. If the bill is canceled (for renewal purposes)

16. If a partial amount is received from the drawee

17. If interest is charged to the drawee

18. If interest is received in cash

Options Available to Drawer in Using Bill of Exchange

Option 1: When Drawer Holds the Bill Until Due Date

Sometimes, the drawer is not in immediate need of cash. They retain the bill until the due date and present it for payment.

Required: Pass journal entries in the books of Mr. A and Mr. B.

Mr. X drew a bill of exchange on Mr. Y on the same day for the same amount, which was duly accepted by Mr. Y and returned to Mr. X. On the due date, Mr. X presented the bill to Mr. Y, who returned the bill dishonored.

As the term of the bill of exchange is drawn for a specific time period, it can be paid only on the due date. If the bill’s holder needs cash before the due date, they can ask the bank to discount the bill.

When the bank discounts a bill of exchange, it deducts interest from the amount of the bill, and the balance amount is credited to the account of the person who gets the bill discounted.

Interest is the rent of money lent by the bank, which is justified by the bank because it has to wait for the bill’s due date. Here, interest is known as discount.

Discount is an expense for the person who gets the bill discounted and a form of income for the bank. The discounted amount is based on the current rate of interest and the time period (i.e., from the date of discounting to the date of maturity).

Study Note: Banks will not discount bills of exchange if the holder has an overdraft balance.

On 1 January 2019, John sold goods to David for $25,000 and drew a four-month bill on the latter. David accepted the bill and returned it to John. On 3 February, John got the bill discounted at 6% p.a. The bill was duly met on the due date.

Required: Pass journal entries in the books of John, David, and the bank.

When a drawer discounts the bill with their bank, it is the drawee’s responsibility to pay the amount of the bill to the bank on the due date. If the drawee fails to do so, the discounted bill is said to be dishonored.

This is the person who is appointed by the central government to administer oaths, certify documents, attest to the authenticity of signatures, and perform other official acts.

The actions of the notary public, such as the noting of re-presentments of bills, facts, and reasons for dishonor of the bill itself (or a slip of paper attached to the bill) is called noting.

Noting is merely a record of dishonor on the face of the bill or on a slip of paper attached to the bill. Protest is a formal certificate of dishonor of bill, issued by the notary public to the bill’s holder. The set of issuing certificates is called protesting.

A small fee received by the notary public from the holder of the bill for noting and protesting is known as noting charges.

Noting charges are paid by the holder of the bill and ultimately recovered from the drawee. Now, if a bill’s holder sues for the recovery of the amount, noting and protest would be strong legal evidence.

After a bill is discounted or endorsed, the drawer has no more responsibility. However, their accounting records are affected if the drawee dishonors the bill on the due date. Therefore, until the bill’s due date, it remains the drawer’s contingent liability.

Q immediately got the bill discounted with Metropolitan Bank Ltd. at 10% p.a. However, on the due date, P dishonored the bill and the bank paid $100 for noting charges.

Required: Pass journal entries in the books of Q, P, and the bank. 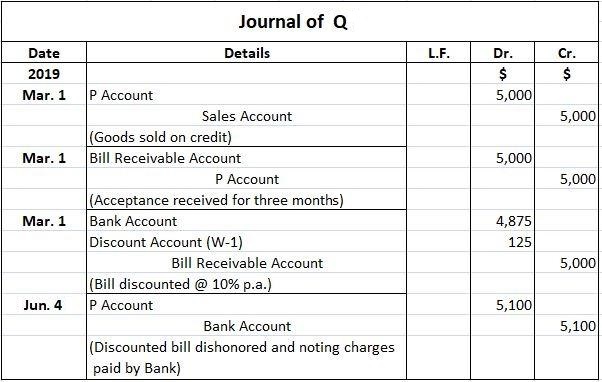 Study Note: Noting charges are the drawee’s expense (i.e., the person who dishonored the bill, not the holder who paid the amount).

Study Note: Noting charges are paid by bank deducted from Q’s Account and ultimately will be recovered from P. It is an expense of P; that’s why Trade Expenses A/c is debited only in P’s books.

Option 3: When Bill Is Endorsed to Third-party Endorsee

The negotiability of a bill of exchange makes it transferable by mere physical delivery, which increases its usefulness. The act of transferring bill of exchange from one person to another for the settlement of debts is called endorsement of bill.

John then bought goods from Harry for $15,000. On 4 February 2019, John endorsed David’s bill to Harry to settle his debt, paying the balance in cash. On the due date, David met the bill.

Required: Record the transactions in the books of all the parties. 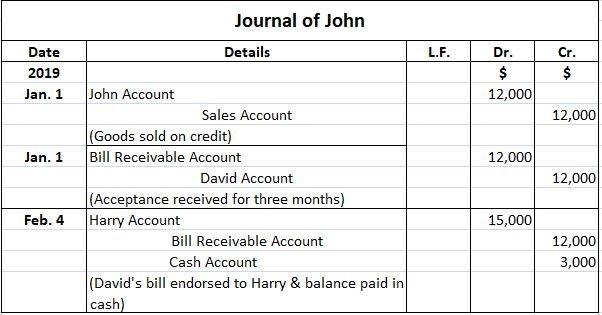 Study Note: Since John purchased goods from Harry, John is already a debtor of Harry. Entries to record sale & purchased b/w John and Harry are not required.

C endorsed the bill to his creditor D, and D got the bill discounted by his bank at 12% p.a. On the due date, the bill was dishonored by A and the bank paid $50 for noting charges.

Required: Pass journal entries in the books of A, B, C, D, and the bank. 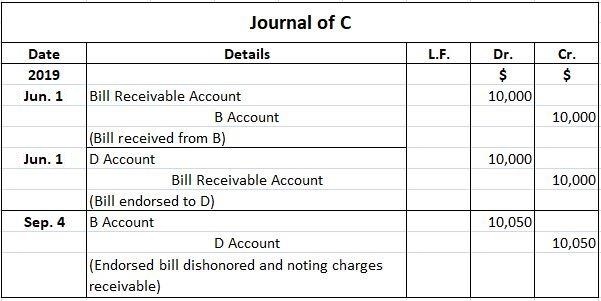 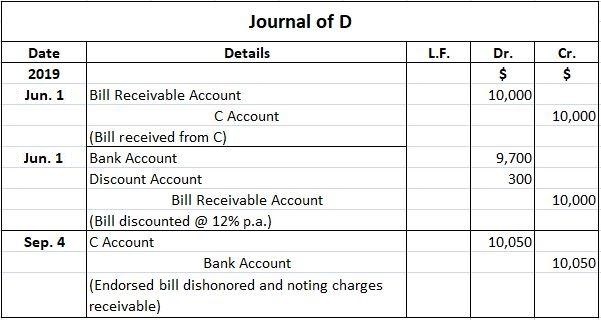 Study Note: Noting charges are paid by the bank, deducted from D’s account, and ultimately will be recovered from A. It is an expense of A, which is why Trade Expenses A/c is debited in A’s books only.

Option 4: When Bill Is Sent to Bank for Collection

Sometimes a drawer has many bills receivable at a time. It becomes difficult for the drawer to keep the bills safely and to present them to their respective drawee. To overcome this difficulty, the drawer can send the bills to the bank for safety and collection purposes.

In discounting, the bill is sold to the bank, whereas in bills sent for collection, the bill is taken into the custody of the bank for safekeeping and convenient collection.

John sold goods to Harry for $20,000. Later, John drew a three-month bill on Harry for the amount.

Harry accepted the bill and returned it to John, who sent the bill to his banker for collection. On the due date, the bill was met by the drawee and the bank deducted collection charges of $100.

Required: Pass journal entries in the books of John, Harry, and the bank. 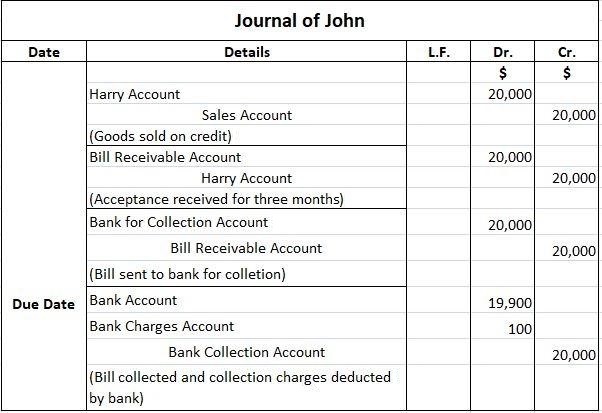 Study Note: It should be noted that bank does not make journal entry in its books of accounts in respect of bill received by bank for collection. However, bank records all particulars of the bill in a Memorandum Book.

Bank for collection account does not show bank balance, like a bank account does. Instead, it is a temporary account showing that bills of exchange are kept in a bank. This account is closed on the due date of the bill, when the bill is either met or dishonored.

On 1 September 2019, John drew a three-month bill on Harry for $5,000. Harry accepted the bill and returned it to John. On 15 September, John sent the bill to the bank for collection. On the due date, the bank presented the bill to Harry, who returned the bill dishonored.

Required: Prepare journal entries in the books of John and Harry.

What is accounting for bills of exchange?

Accounting for bills of exchange starts when the drawer draws a bill and the drawee accepts it. The drawee returns the bill to the drawer after accepting it. Now, the drawer is the holder of the bill.

What are the several ways to use the bill of exchange?

What are the journal entries for bills of exchange?

When goods are sold and purchased and when the bill is drawn and accepted.

What are the options available to the drawer in using the bill of exchange?

What is the purpose of a bill of exchange?