Renewal of Bill of Exchange

Renewal of Bill of Exchange: Definition

A renewal of bill of exchange is an act in which an old bill is canceled before maturity in return for a new bill, including interest, for an extended period. It is performed by a drawer at the request of a drawee.

Renewal of Bill of Exchange: Explanation

Sometimes, a drawee may not be in a position to pay the amount of a bill on the due date. In this case, they may ask the drawer to cancel the old bill and draw a fresh one for an extended period.

The steps involved in the renewal of a bill of exchange are the following:

1. The old bill is canceled. The journal entry for cancellation of the bill is the same as the entry made if a bill is dishonored. Under each option used by the drawer (i.e., when the drawer keeps the bill with themselves, gets the bill discounted, or endorses or sends it for collection).

2. Entry made for partial payment of the bill, including interest if paid in cash.

3. Entry made for charging interest if not paid in cash.

4. Entry for drawing a fresh bill for the outstanding amount.

Different Ways of Renewing a Bill of Exchange

A bill can be renewed in any of the following ways:

1. Drawee pays nothing and accepts a new bill for the original amount plus interest.

2. Drawee pays a partial amount and accepts a new bill for balance plus interest.

3. Drawee pays interest in cash and accepts a new bill for the original amount.

4. Drawee pays a partial amount and interest in cash and accepts a new bill for the balance amount.

Journal Entries for Renewal of Bill of Exchange

Example 1: Drawee pays nothing and accepts new bill for original amount plus interest

On 1 March, Q is unable to pay the bill. Therefore, they ask P to cancel the first bill and draw a fresh bill for the amount of the first bill plus interest @ 10% p.a.

P agrees to the proposal and does so Q. The new bill is for two months. On the due date, the second bill is met. 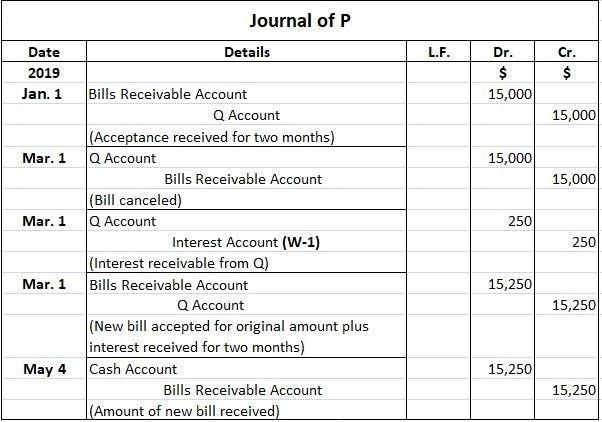 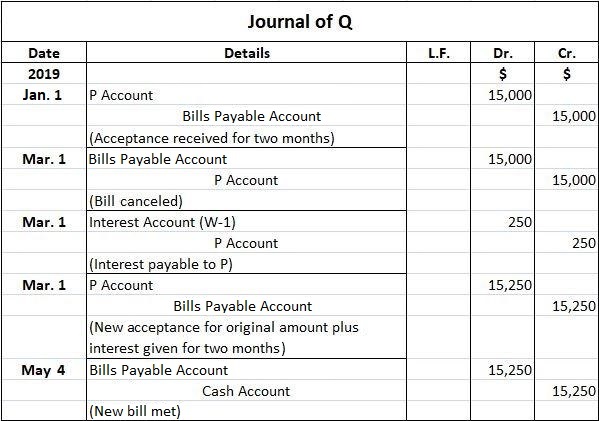 Before the due date, B paid A $4,000 and asked them to draw a new three-month bill for the balance plus interest @10% p.a. A agreed and B met the new bill.

Required: Pass journal entries in the books of A and B. 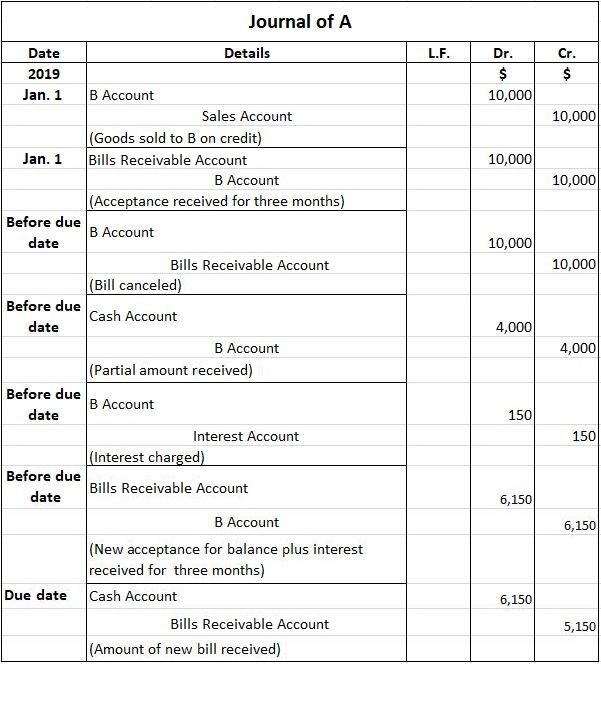 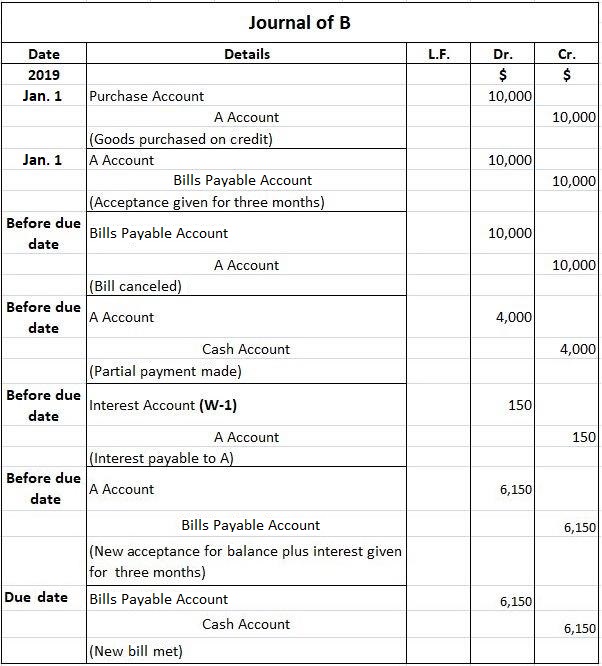 K accepted a three-month bill from R for $25,000. Before the due date, K asked R to renew the bill and R agreed. The terms were that K would pay $500 in cash in cash as interest and would accept a new two-month bill for the original amount of the first bill. 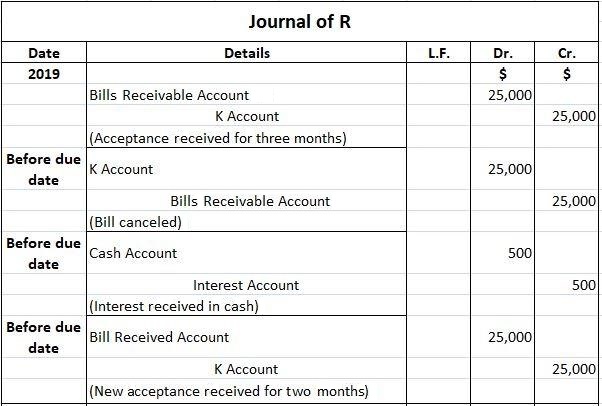 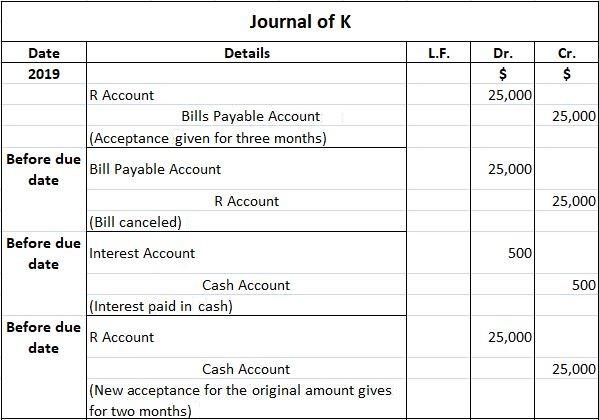 John immediately got the bill discounted @ 12% p.a. At maturity, David was able to pay $2,300 only, out of which $300 was for interest. David asked John to draw another bill for the balance amount. John did so, with a new two-month bill created that was eventually met on the due date.

Required: Pass journal entries in the books of John and David. 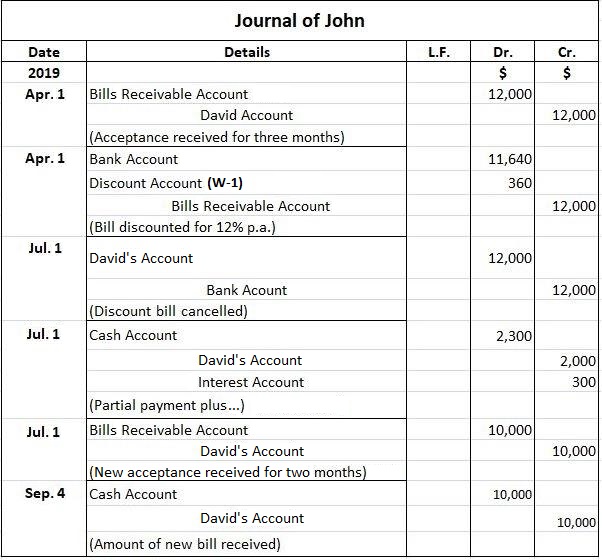 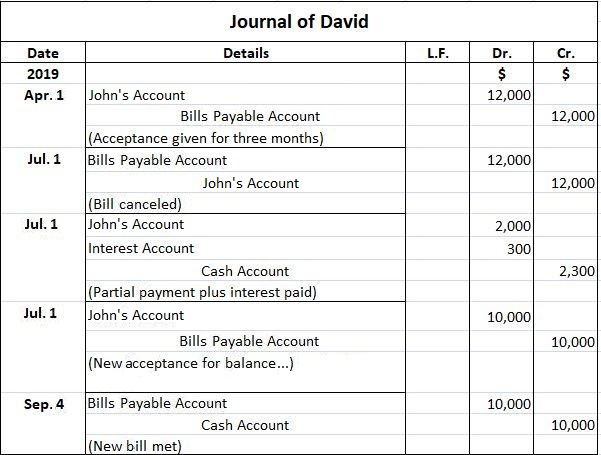 What is the difference between a renewal of Bill Of Exchange and accommodation bill?

How will you classify an endorser who takes a Discounted Cash At Sight (DOCAS) bill?

The endorser of docas bill receives interest, therefore it cannot be classified as accommodation party.

What is the difference between a bill and a note?

What is the difference between a Bill Of Exchange and a promissory note?

What is the difference between an "acceptor" and a "drawee"?