Notes receivable refers to a written, unconditional promise made by an individual or business to pay a definite amount at a definite date or on demand.

The individual or business that signs the note is referred to as the maker of the note. The person to whom the payment is to be made is called the payee.

A common format of notes receivable is shown below. In this example, J. Hart is the maker and C. Brecker is the payee. 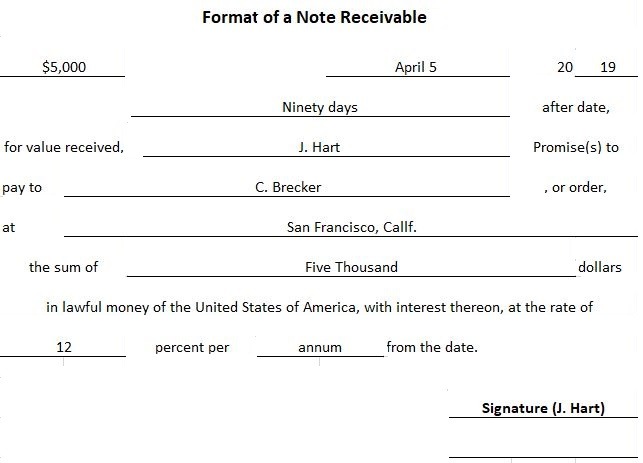 As a quick note, in this article we are mainly concerned with accounting for notes receivable; however, the concepts that we will consider apply equally well to notes payable.

In some industries, it is common for a seller to insist on a note rather than an open account for certain types of sales.

A case in point is the sale of equipment of other personal or real property in which payment terms are normally longer than is customary for an open account.

In other cases, a customer’s credit rating may cause the seller to insist on a written note rather than relying on an open account.

Also, if customers are known to default on paying their accounts, the seller may insist that they sign a note for the balance.

Other notes receivable result from cash loans to employees, stockholders, customers, or others. In this discussion, we will refer to all notes as promissory notes.

There are several elements of promissory notes that are important to a full understanding of accounting for these notes. These are the note’s principal, maturity date, duration, interest rate, and maturity value.

For example, a note may have a stated maturity date of 31 December or it may be due in a specific number of days or months (e.g., three months after the note’s date).

The note shown above is due 90 days after its date (5 April), which means it is due on July 4. This July 4 maturity date is computed as follows:

The duration of notes receivable is the length of the time that notes are outstanding or the number of days called for by the notes.

This period of time is important in calculating the interest charges related to the notes.

In this example, interest is based on the fact that the note has been outstanding for 62 days.

Interest is the income or expense from lending or borrowing money. To the lender or payee, interest is income, and to the maker or borrower, it is an expense.

The total interest related to a particular note is based on the note’s principal, rate of interest, and duration. It can be calculated using the following formula:

If the same note had a term of only 5 months, the interest would be $500, calculated as follows:

In some cases, the term of the note is expressed in days, and the exact number of days should be used in the interest computation.

When a note is received from a customer, the Notes Receivable account is debited. The credit can be to Cash, Sales, or Accounts Receivable, depending on the transaction that gives rise to the note.

In any event, the Notes Receivable account is at the face, or principal, of the note. No interest income is recorded at the date of the issue because no interest has yet been earned.

If the note extends beyond one period, interest is recorded at the maturity date or at the end of the accounting period using an adjusting entry.

Receipt of the Note

To show the initial recording of notes receivable, assume that on 1 July, the Fenton Company accepts a $2,000, 12%, 4-month note receivable from the Zoe Company in settlement of an open account receivable.

The following entry is made to record this transaction:

In some situations, the receipt of the note results from the sale of merchandise. For example, suppose that a $5,000 sale is made to a customer for a trade note receivable. In this case, the following two entries are made: 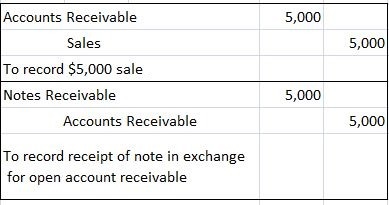 It is possible to combine the previous two entries by debiting Notes Receivable and crediting Sales.

However, doing so will result in a loss of information.

This is because not all the sales made to a particular customer are recorded in the customer’s subsidiary accounts receivable ledger.

Payment of the Note

When the payment on a note is received, Cash is debited, Note Receivables is credited, and Interest Revenue is credited.

For example, assume that the $2,000 note from the Zoe Company recorded on 1 July is paid in full on 31 October. The entry is:

In some cases, the note is received in one accounting period and collected in another. In these situations, interest must be accrued at year-end. 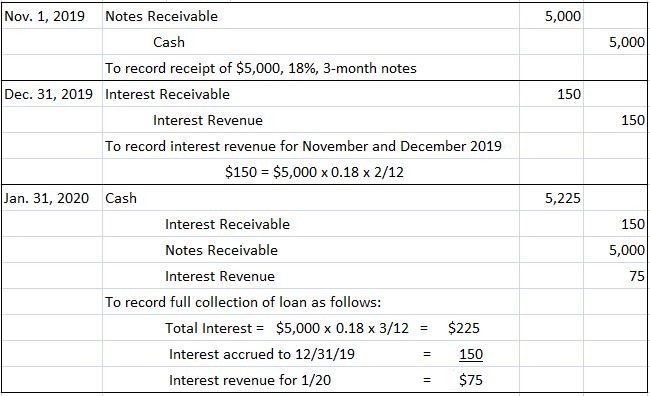 When the borrower or maker of a note fails to make the required payment at maturity, the note is considered to have defaulted.

At this point, the note should be transferred to an open account receivable. Accounts Receivable is debited for the full maturity value, including the principal and unpaid interest.

For example, if the Zoe Company defaults on its $2,000, 12% note, the Fenton Company will make the following entry on 31 October:

Although it may seem peculiar to record interest revenue on defaulted notes receivable, the Zoe Company is still obligated to pay both the interest and the principal.

The accounts receivable is just as valid a claim as are the notes receivable, as well as the interest.

Furthermore, by transferring the note to Accounts Receivable, the remaining balance in the notes receivable general ledger contains only the amounts of notes that have not yet matured.

Accounts receivable can be assigned, pledged, or factored. Essentially, in all these situations, the company that owns the receivable either sells it to the bank (or another lender) or borrows against it to obtain immediate cash.

The ability to raise cash in this way is important to small and medium-sized businesses, which may have limited access to finance.

Accounting for the assigning or factoring of accounts receivable are topics that are typically covered in an intermediate accounting text.

What are notes receivable?

Notes receivable refers to a written, unconditional promise made by an individual or business to pay a definite amount at a definite date or on demand.

How do I record a note receivable in my accounting records?

To record a note receivable, you will need to debit the cash account and credit the notes receivable account.

What is the journal entry for interest on a note receivable?

The journal entry for interest on a note receivable is to debit the interest income account and credit the cash account.

How do I calculate interest on a note receivable?

Interest on a note receivable is calculated by multiplying the principal balance of the note by the interest rate and by the number of days that have elapsed since the last interest payment was made divided by 365.

What is the maturity date of a note receivable?

The maturity date of a note receivable is the date on which the final payment is due.