The risk associated with extending credit arises from the possibility that the creditor will not pay. This risk influences both the measurement of income and the description of the receivables held by the seller.

In the scenario of recording uncollectible accounts and bad debts, the accountant’s task is to consider three issues:

Each of these questions is discussed below. The article also discusses the practical aspects of disclosing the impact of non-collection and the entries that are made for dealing with bad debts.

What Is the Nature of the Loss?

Most accounting theorists have endorsed the position that the loss arising from bad debt is an expense. They rely on the accrual approach, which calls for recognizing revenue when the seller performs.

The fact that the buyer fails to perform is properly described, they conclude, as an expense. This view has been persuasive in the development of the generally accepted accounting principles (GAAP).

When Does the Loss Occur?

Accountants also have debated the question of the time period in which to recognize the loss on non-collection. Some have supported the point of view that it should not be recorded until it is known for certain that the debtor will not pay.

The reliability of this approach is potentially high because it does not rely on estimates. However, it has the potential for income manipulation by allowing management to determine when to record the expense.

Another weakness of this approach is that the recognition of the expense is dependent upon observing its effects instead of matching it with its related revenues. For these reasons, this approach is not generally accepted.

Small firms and large firms with small losses may use this approach due to its simplicity and on the basis of lack of materiality. However, it is otherwise an unacceptable practice.

Most accountants take the position that the expense is incurred in order to increase sales and, therefore, should be reported in the same time period as those sales if cause and effect are to be related.

Essentially, it is believed that the expense is incurred at the time that the sale takes place.

This approach has been generally accepted in common practice for many years. When implemented, this approach results in an annual adjusting entry of this form, assuming an expense of $16,000:

This system is often referred to as the allowance method. The allowance is a contra account and is credited instead of the Accounts Receivable control account because it is not known which individual accounts are uncollectible.

If the control account was credited, its balance would not equal the sum of the subsidiary account balances.

What Is the Size of the Loss?

When the nature and timing of the loss have been determined, our attention can be focused on a dollar measurement of the amount to be recorded.

Some accountants prefer to use a direct approach to estimating the expense. That is, the first result of the analysis is the amount of bad debt expense for the period.

This approach is income statement oriented in that it is designed to match the main expense of extending credit with the revenue produced by that activity.

In practice, the estimate should be made using the prediction basis that works best.

That is to say, if other factors can make one prediction better (such as total sales, general economic conditions, or geographic region), we should use them if they are easily included.

For example, Sample Company estimates that its bad debt expense for 20×1 will be 1.2% of its credit sales of $17,530,000. The following entry would be recorded in the journal:

Under this direct approach for estimating the expense, the increase in the allowance is computed indirectly. It also should be noted that this entry is the only one made during the year to the Bad Debt Expense account.

Other accountants prefer an indirect approach to estimate the amount of the expense. That is to say, the first result of their analysis is the desired year-end balance of the allowance account.

This approach is focused on the balance sheet in that its primary goal is an accurate description of the net collectible amount of receivables.

When the appropriate year-end balance is computed, it is compared with the preadjustment balance and the needed change is determined. Thus, the bad debt expense is estimated indirectly as the change in the allowance.

For example, suppose instead that the accountant at Sample Company estimates that the Allowance for Uncollectibles should be $375,000 after it is adjusted. The unadjusted balance is only $114,550.

Therefore, the account needs to be credited for the difference of $260,450. This journal entry would be recorded:

Again, this entry would be the only one made during the year that would affect the expense account.

There are a variety of ways to estimate the balance of the allowance. All approaches involve an analysis of the existing accounts and the application of one or more percentage factors.

The accountant for Sample Company may have estimated that 5% of its $7,500,000 of receivables were uncollectible in arriving at the desired balance of $375,000 used in the entry above.

A potentially more accurate approach is the analysis of an aged trial balance of the receivables. This schedule classifies the receivables on the basis of the length of time they have been outstanding.

An aged trial balance is often prepared routinely for internal use and for auditing purposes.

The example below shows an excerpt from an aged trial balance for Sample Company as of 31 December 20×1.

When this information is available, it can be used to predict the uncollectible amount. Specifically, we can apply different percentages to each group.

In effect, we act as if each age group is a different population of receivables with a unique percentage of uncollectible amounts. For Sample Company, this analysis was performed (the percentages are based on past experiences):

This result is compared to the preadjustment balance in the allowance account, and the change is recorded in an adjusting entry. 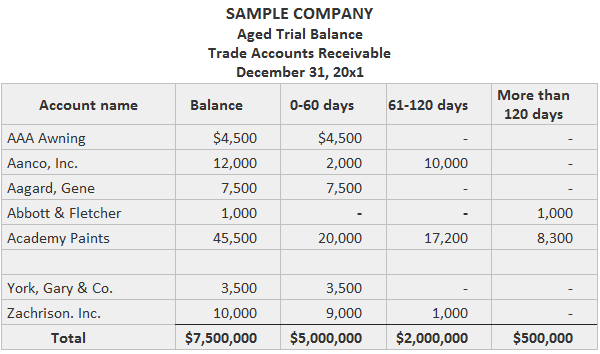 There is little practical difference between the direct and indirect approaches because they are just different ways to analyze exactly the same data.

Entries made under the allowance method after recording the annual adjusting entry are the same under either the direct or indirect approach to estimating the expense.

Whenever a specific account is identified as being uncollectible, it should be removed from the ledger with an entry such as this one recorded by Sample Company for one of its receivables:

This entry can be made because it is known which receivables account to remove from the subsidiary ledger. The action does not affect either the net amount of accounts receivable or the bad debt expense.

Some of these write-offs occur during the year, such as when specific evidence of non-payment is received. Others are postponed until the end of the year when the aged trial balance is prepared.

If all or part of a previously written off account is actually collected, several procedures are possible. If Sample Company collects $7,500 of the written-off account, one approach would initially reverse that amount of the write-off:

Then, a normal cash receipt could be recorded:

The same result could be achieved by recording one entry combining the effects of the two:

Another approach that may be acceptable (e.g., due to a lack of materiality for a small or medium-sized business) is to record a credit to Miscellaneous Revenue.

Bad Debt Expense and the SCFP

When applying the working capital basis to preparing the statement of changes in financial position (SCFP), there is no need to adjust net income for bad debt expense in calculating the amount of working capital generated from operations.

Since the entry that recognizes the expense also reduces current assets by an increase in the Allowance for Uncollectibles, it also reduces working capital.

When an uncollectible account is actually written off, there is again no change in working capital. Also, no disclosure should be made on the SCFP for this action.

When an account that has been written off is collected, cash is increased and the net amount of accounts receivable is decreased. Given that the change is confined within working capital, no disclosure is made in the SCFP.

There are several ways to disclose information about receivables and their uncollectible amounts. The most straightforward approach is to use the following form:

This approach allows the reader to calculate the proportion of the total group that is believed to be collectible or uncollectible. To simplify the presentation, however, many companies use the following alternative to disclose the same facts:

If the company believes that information about the allowance is not material, this approach might be used:

In addition to bad debts, there are several other reasons why a company may fail to collect the face amount of its receivables. If the difference is material, one or more allowances may be created.

For example, if receivables are recorded gross, that is, before cash discounts, it may be appropriate to establish an allowance for the discounts that might be taken on the accounts that are eligible for them.

In this example, given that the amount in discounts taken is known early in the following year, there is no need to estimate the amount. Once the number is known, the following retroactive adjustment could be made:

If receivables are recorded net of discounts, it may be necessary to establish a supplemental allowance to show the additional amount collectible because the discounts have been missed.

Again, the timing may be such that it is possible to make the calculation very precisely. This entry could be entered retroactively:

The likelihood of either amount being material is so small that almost all firms ignore this procedure. An allowance might also be set up to provide for possible returns of merchandise by customers. The entry would be written as follows:

What is an uncollectible accounts expense?

Uncollectable Accounts Expense is an amount written off as uncollectable. This term is used in finance and accounting.

What are the different types of uncollectible accounts expense?

What is the difference between uncollectible accounts expense and bad debt?

Uncollectible accounts expense is an estimate of the amount of receivables that will not be collected. Bad debt is a specific account that has been determined to be uncollectible.

How is uncollectible accounts expense recorded?

How are bad debt expenses and allowance calculated in regards to uncollectible accounts expenses?