Often in real life, a company’s management will decide that it would rather have cash immediately than wait for receivables to be collected.

However, there are characteristics of these assignments that prevent some of them from being exactly like a sale. The illustration below summarizes the four possible methods: 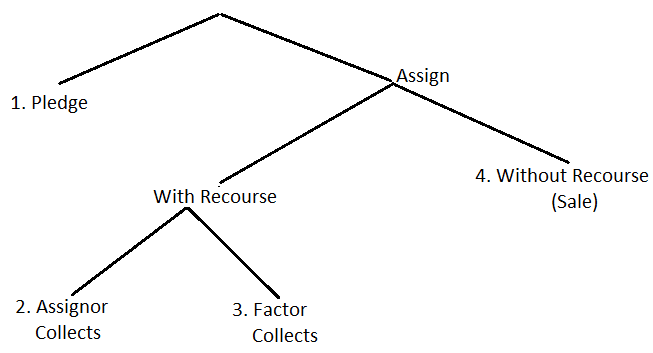 The use of non-uniform terms in practice makes it even more difficult to understand these practices. The meaning of pledging is generally unambiguous and, therefore, there is no problem.

We have chosen the approach in this category for its descriptiveness, simplicity, and similarity to legal usage.

We encourage the reader to understand the concept of each approach. Then, when these situations are encountered in practice, they will be accounted for according to their nature rather than the terminology used.

This example demonstrates disclosures when receivables are used to generate cash. Consider the following information about the Rath Packing Company’s current assets:

All receivables and inventories have been pledged as collateral for borrowings under a financing agreement.

The lender is a commercial finance company; however, two banks participated in the borrowings up to a maximum amount of $4,000,000 until 3 September 2018.

One of the banks has continued to participate up to a maximum amount of $2,000,000 since that date.

The total amount available for borrowing under the agreement varies as determined by the commercial finance company. It amounted to $10,000,000 on 27 September 2018.

What are accounts receivable?

What are the methods used to generate cash from receivables?

What are the benefits of using receivables to generate cash?

There are several benefits to using receivables to generate cash. First, it can help improve a company's cash flow situation by increasing the amount of money coming in. Second, it can help a company better manage its working capital, as it can use the cash generated from receivables to pay down other debts or invest in new inventory. Finally, using receivables to generate cash can help a company build stronger relationships with its customers, as they will see that the company is willing to work with them to get paid.

What are the risks associated with using receivables to generate cash?

How can I maximize the benefits and minimize the risks of using receivables to generate cash?

There are a few things a company can do to maximize the benefits and minimize the risks of using receivables to generate cash. First, it is important to have a solid understanding of one's customers and their payment habits. This will help a company better assess which receivables are most likely to be paid on time and which ones are more likely to go unpaid. Second, a company should have strong internal controls in place to ensure that all receivables are properly managed and collected. Finally, a company should consider using a third-party service to help manage its receivables and collection efforts. This can take some of the burdens off of the company and help improve its chances of successful collections.