The idea of cost accounting is to collect, classify, record, and suitably allocate expenditures to determine the costs of products or services. After collecting costs, these are classified to ensure their identification with cost centers or cost units.

The groups that costs are classified into are known as classes.

Costs can be classified using different bases or characteristics, including element, nature, variability, controllability, normality, and function. The main classes of cost are shown in the image below. 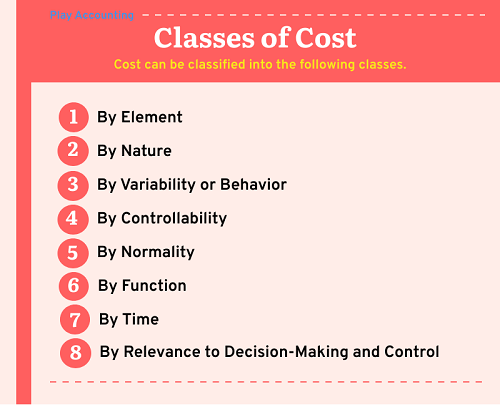 Classification of Cost by Element

In this class, costs are categorized based on the factors they are incurred for. Based on their elements, costs may be grouped as:

Labor cost refers to the cost of paying employees in an undertaking, which includes salary, wages, and commission.

Expenses refer to the cost of services provided to an undertaking and include the notional cost of owned assets (e.g., rent for a building, telephone expenses, depreciation of the owned factory building, depreciation of delivery van, and so on).

Classification of Cost by Nature

In this class, costs are classified based on their identifiability with cost centers or cost units. Costs can be grouped as follows based on their nature:

Direct costs are costs that can be directly and easily traced to (or identified with) a product, process, or department. Common examples of direct costs include the materials used and labor employed in manufacturing an article or in a production process.

Indirect costs, on the other hand, are costs that are not traceable to any particular product, process, or department, but which are common in a number of products, processes, or departments.

Examples of indirect costs are factory rent, factory insurance, and the salary of the factory manager.

Classification of Cost by Variability or Behavior

Costs (both direct and indirect) can also be classified into the following groups based on their behavior relative to changes in the volume of activity:

Variable costs are costs that vary in a directly proportional way to changes in the volume of output or sales. These costs tend to increase or decrease with the rise and fall in production or sales. Variable costs vary in total but their per-unit cost stays the same.

These costs depend mainly on the passage of time and do not vary directly with the changes in the volume of output or sales. Typical examples of fixed costs include rent, rates, taxes, insurance charges, and salaries for managers.

It is worth remembering that fixed costs are not absolutely fixed for all of time. In fact, fixed costs are fixed only in relation to a particular level of production capacity.

Semi-variable costs are costs that tend to vary with changes in the volume of output or sales, but which do not vary in a directly proportional way relative to such changes. These costs have the characteristics of both fixed and variable costs.

Typical examples of semi-variable costs include repairs and maintenance costs for plants, machinery, and buildings and supervisor salaries.

Under this category, costs are classified based on whether or not they are influenced by the action of a given member of an undertaking. The classes of costs are:

Controllable costs are costs that an entity in an undertaking can influence through their action. An undertaking is usually divided into several departments or cost centers that are placed under the direct control and supervision of specified persons.

The person in charge of a particular department or cost center can control only those costs that come directly under their control.

Therefore, the issue of whether a cost is controllable or uncontrollable is determined by the individual or level of management in question.

Normal or unavoidable costs are normally incurred at a given level of output under the conditions for which that level of output is normally attained. Costs of this kind cannot be avoided at all.

It is possible to avoid such costs if proper care is taken. The cost of spoilage of material over and above the normal limit is an example of an abnormal cost.

Costs can also be classified based on their perceived function. The following types of cost exist by function:

Distribution costs are associated with the sequence of operations. This sequence starts with dispatch preparations for the packed product and ends by facilitating the availability of the reconditioned, returned, and empty packages for re-use.

From the view of time, costs can be classified as:

Historical costs are costs that are identified after they have been incurred. That is to say, they are determined after goods have been manufactured or services have been rendered.

Historical costs simply represent a post-mortem of past events, and they are useful in ascertaining profitability but not in exercising cost control.

Estimated costs are costs that, according to investigation and analysis, are most likely to be incurred.

They are estimated in advance based on the following assumptions: firstly, that costs are more or less free to move; and secondly, that what is made is the best estimate of the cost conditions that will apply when the cost is incurred.

Standard costs refer to a predetermined cost that is calculated from the management’s standards of efficient operation and the relevant necessary expenditure.

Standard cost is established based on the assumption that costs will not be allowed to move freely but will be controlled as far as possible.

This ensures that the actual cost will be as close to the standard cost as possible, and that any disparity between actual and standard cost can be reasonably explained.

Cost Classification by Relevance to Decision-making and Control

In this category, costs are classified based on whether they are relevant to managerial decisions. These costs are as follows:

Sunk Costs: Sunk costs refer to costs that have already been incurred and cannot be changed by a future decision. These costs become irrelevant costs for later decisions.

For example, if a manager decides to replace an existing machine with a new one, the amount of capital invested in the existing machine (less scrap value) will be irrecoverable and, as a result, is known as a ‘sunk cost’.

Out-of-pocket Costs: These costs represent the present or future case expenditure regarding decisions, which vary based on the nature of the decision. Management decisions are directly affected by such costs because they give rise to cash expenditure.

For example, consider a firm that has its own fleet for transporting raw materials and finished goods from one place to another. It seeks to replace these vehicles by employing public carriers.

In making this decision, the depreciation of the vehicles is not to be considered but the management must take into account the present expenditure on fuel, maintenance, and driver salaries. Such costs are treated as out-of-pocket costs.

Opportunity Costs: The opportunity cost of a product or service is measured in terms of revenue that could have been earned by applying the resources to some other use. Opportunity cost can be defined as the cost of foregoing the best alternative.

Thus, the opportunity cost of yarn produced by a composite spinning and weaving mill, which is used in the weaving section, would be the price that could have been obtained by selling the yarn in the market.

Imputed Costs: Imputed costs are costs that are not included in costs but are considered for making management decisions. These costs are hypothetical in character.

For example, interest on capital, though not actually payable, must often be included to judge the relative profitability of two products involving unequal outlays of cash.

On the other hand, if the choice results in a decrease in total costs, such decreased costs are called decremental costs.

Shut-down Costs: Shut-down costs are costs that will still be incurred when a plant is shut down temporarily. Sometimes, the normal operations of a business must be suspended temporarily due to unfavorable market conditions, strikes, or other forces.

During the suspension of production or other activities, certain costs may still need to be incurred, and these are considered ‘shut-down costs’. Examples of shut-down costs include rent for factory premises, salaries of top management, and so on.

Postponable Costs: These are the costs that can be postponed or shifted to the future with little or no effect on the efficiency of current operations. These costs are postponable but not avoidable and must be incurred at a later stage.

The concept of a postponable cost is highly significant in the railway and transport business, where it’s possible to delay the cost of repairs and maintenance for a certain period.

In manufacturing, economic crises can also be averted by postponing certain costs. This strategy was used during the depression period.

Thus, the replacement cost of an asset is the cost that would be incurred if the asset were purchased at the current market price and not at the original purchase price.

Abandonment Costs: Abandonment refers to the complete retirement or withdrawal of a fixed asset from service or use. Fixed assets are abandoned when they are no longer serviceable.

Abandonment cost refers to the cost incurred in abandoning a fixed asset (i.e., the cost that cannot be recovered or salvaged from the abandoned asset). It is also known as abandonment loss.

Other Types of Cost

Development Cost: This refers to the cost of the process that begins with making the decision to produce a new/improved product/method and ends with the commencement of formal production of that product/method.

Pre-production Cost: This refers to the part of the overall development cost that is incurred in making a trial production run before beginning formal production.

Conversion Cost: This refers to the costs incurred to convert raw materials into finished goods, and it consists of direct labor cost, direct expenses, and factory overhead.

What is the idea of cost accounting?

The idea of cost accounting is to collect, classify, record, and suitably allocate expenditures to determine the costs of products or services. After collecting costs, these are classified to ensure their identification with cost centers or cost units.

What are the different classes of cost?

What are the classification of cost by element?

These are material cost, labor cost and expenses

What is the classification of cost by nature?

What are the classification of cost by variability or behavior?

It was classified as variable costs, fixed costs, semi-variable or semi-fixed costs.