Fixed costs are costs that remain constant in total within a relevant range of volume or activity. Here, the concept of the relevant range is critical; it refers to the range of activity that the company expects to operate in.

Alternatively, a fixed cost is a cost that does not vary and, in this way, remains constant over a given period. It also stays in a specific range of activity despite fluctuations in production volume.

Examples of fixed costs include:

Fixed costs (or constant costs) are costs that are not affected by an increase or decrease in production. That is to say, fixed costs remain constant for a given period despite changes in production volume.

For practical purposes, this definition of fixed cost can be changed slightly.

A fixed cost will change over time due to situational factors that are not impacted by a firm’s activity (e.g., rent or taxes may change). As such, a cost is fixed only within a limited time period. 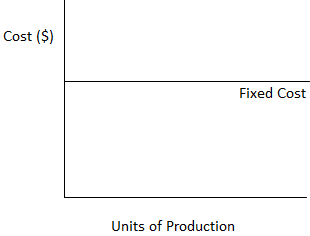 Total fixed costs are shown by a straight line drawn parallel to the x-axis because fixed costs do not respond to changes in volume or activity.

What are fixed costs?

Are costs that are not affected by an increase or decrease in production. That is to say, fixed costs remain constant for a given period despite changes in production volume.

What are the examples of fixed costs?

What are the characteristics of fixed costs?

A fixed cost remains constant over a given period. Per-unit fixed cost is inversely proportional to output (i.E., It decreases as output increases, while it increases as output decreases). Its allocation to departments or cost centers is generally made by managerial decisions that typically adopt various cost apportionment methods. Top management personnel (rather than departmental supervisors) are responsible for controlling fixed costs. Fixed costs are not fixed for the long term

What is the difference between fixed cost and total cost?

How is the total fixed cost calculated?

To determine your total fixed costs, subtract the sum of your variable costs for each unit you produced from your total cost of production.