Job No. 58 passes through three departments: X, Y, and Z. The following information is given regarding this job:

Required: Calculate the cost of Job No. 58 from the above figures. 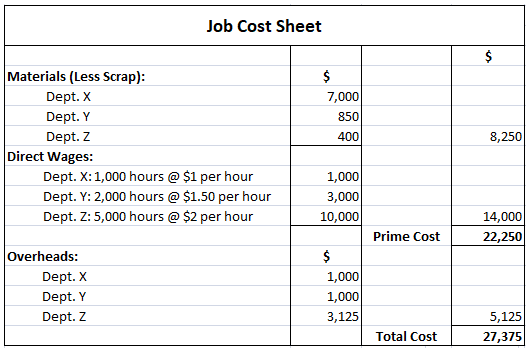 Note: Calculation of overheads chargeable to Job No. 58 was made as follows: 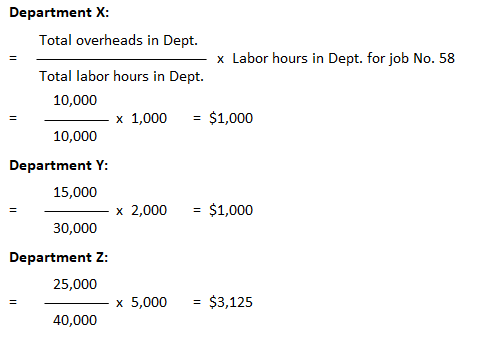 The expenses shown below were incurred for a job during the year ended on 31 March 2019.

Required: You are required to prepare a statement showing the profit earned from the job during the year ended 31 March 2019, as well as an estimated price of a job which is to be executed in the year 2019-20.

The various overheads should be recovered on the following basis while calculating the estimated price:

Note: Calculation of overheads rates and percentage of profit on sales took place as follows:

M/s. Perfect Printers Ltd. operates a printing press. During November 2019, the plant was operating at full capacity. The material and labor costs of Job No. 101 and all other jobs worked on in November are shown below.

In addition to these costs, factory overheads incurred in November amounted to $44,000. Overhead is allocated to production based on direct labor costs.

If the overtime premium is fully charged to Job No. 101, the job cost sheet would be prepared as shown below.

If the overtime premium is charged pro-rata to all jobs, the job cost sheet would be prepared as follows:

The overtime premium should be charged fully to Job No. 101 if it was a rush job and it was done at the request of the customer.

However, if the overtime work was due to limited production capacity and it was accidental that Job No. 101 was undertaken during the overtime, then the overtime premium should be charged pro-rata to all jobs.

The company’s profit and loss during November will be affected by the choice of any method if all the jobs performed during the month are not completed by the end of the month.

If the overtime premium is fully charged to Job No. 101 but is not completed by 30 November 2019, then the loss on the job will not be included in the account for November 2019.

Similarly, if the overtime premium is charged pro-rata to all the jobs, the profit or loss on any job that remains incomplete will be carried over to the next month.

The job details shown below were taken from the costing books of a contractor for the month of December 2019.

The respective job accounts showed the following balances in the contract ledger on 30 November 2019.

A certificate of completion was obtained for Job No. 201. Of the balance of this account standing on 30 November 2019, $61,500 was in respect of plant and machinery. The remainder consisted of wages and materials.

Required: Prepare contract accounts for Job Nos. 1 and 2 and state the profit made on jobs certified as completed. Allow depreciation on machinery at 15% per anum. Assume 10% for establishment charges on the cost of wages and materials consumed. 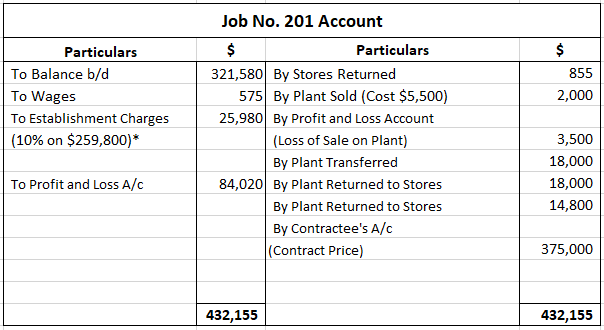 1. Establishment charges in respect of Job No. 201 A/c were calculated as follows:

2. Depreciation on plant and value of plant returned to stores were calculated as follows:

Crunching numbers is not only be enjoyable but also satisfying if you understand the value behind doing it. Learn more from professionals about this topic and anything under the finance sun by connecting to a financial advisor in Dallas, TX or visit our financial advisor page to get the full list of areas we work with.

What is job costing?

Job costing is the method of allocating production costs to specific jobs.

What is a job cost sheet?

What are some advantages of job costing?

Some of the main advantages of job costing over process costing include: job costing allocates overhead based on production volume, provides greater accuracy in assigning a cost to products, and differentiates between variable and fixed costs.

What information is included in a job cost sheet?

A job cost sheet should contain the job name, units started and units finished on each job, and direct materials used on the job

What is job-order costing?

Job order costing is a method of accounting for manufacturing costs using a specially designed set of accounts. It is based on the assumption that manufacturing activities are undertaken to fulfill specific customer orders or contracts.