When a contractor has accepted a contract, a separate account is opened for each contract, bringing together all the costs relating to a particular contract. A serial number is assigned to each contract, which is known as a contract account.

Materials and plant stolen or destroyed are abnormal losses and should be charged to the profit and loss account.

Similarly, profit or loss arising from the sale of the plant or materials should also be transferred to the profit and loss account by way of abnormal items.

The other items to be shown on the credit side of the contract account are contract price (in completed contracts) and the work-in-progress, which consists of the value of certified work and the cost of uncertified work (in incomplete contracts).

An example of a contract account is given below.

This section provides an overview of the treatment of the various items that are included in the contract account.

Amounts received from the sale of surplus materials will be credited to the contract account, while any profit or loss arising from them is to be transferred to the profit and loss account by way of abnormal items.

Materials that are lost, stolen, or destroyed by accident (e.g., in a fire) will be charged to the profit and loss account by way of abnormal loss.

The values of the material in hand at the end of the accounting period will appear on the credit side of the contract account.

The following example shows how different material items should be treated in the contract account.

A company undertook Contract No. 5 for the construction of a cinema building. He purchased materials for the contract at a cost of $80,000.

Issues from stores were $45,000. Materials valued at $3,000 were returned to stores, while materials costing $2,000 were stolen and those costing $500 were destroyed by fire.

Materials in hand at the end of the accounting period were valued at $10,000.

Based on the above information, show the treatment of the materials in Contract Account No. 5. 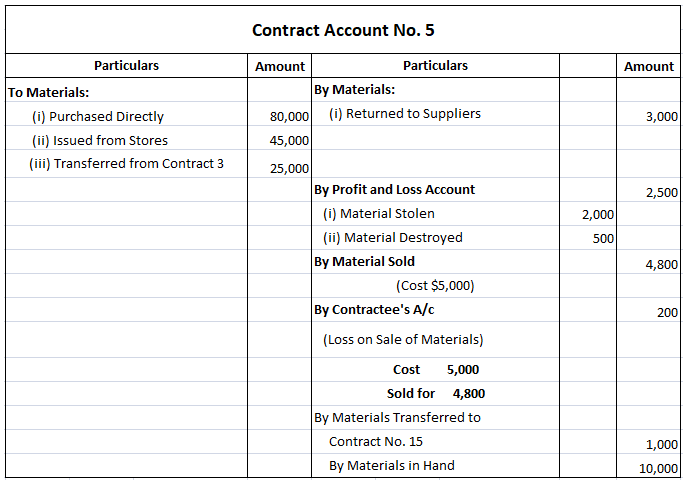 Every worker who is engaged at the site of a particular contract, irrespective of the nature of the work they perform, is treated as a direct worker, and they receive their wages as direct wages. Such wages are to be charged to the particular contract directly.

If a worker (generally the supervisory staff) is engaged at two or more contracts, his total wages may be apportioned to different contracts based on the time devoted to each one (or on some other equitable basis).

Wages accrued or outstanding at the end of the accounting period should appear on the debit side of the contract account.

The following data are available for the year ending 31st March 2019, relating to Contract No. 2, which commenced on 1st April 2018.

Show the treatment of these items in Contract Account No. 2.

The plant purchased by a contractor to execute the contract may be divided into two parts: special plant and general plant.

Special plants are specifically purchased for a particular contract, and they are expected to be used for that contract over a long period. The value of the special plant at the start of the use period (i.e., the original cost including installation charges or written down value) is debited to the contract account.

At the end of the accounting period, the value of the plant after providing an appropriate amount of depreciation (i.e., depreciated value) should be credited to the contract account.

In this way, the depreciation on the plant is automatically charged to the contract account. When calculating the value of plant in hand, the value of plant returned to store, plant sold, and plant destroyed, among others, should also be considered.

Show how the plant would be treated in Contract Account No. 5.

Show the treatment of plant in the contract account by depreciating it by the following:

You should assume that the company’s accounts are closed on 31st March each year.

Show the treatment of the plant by providing depreciation at 20% per annum. The books are closed on 31st March each year.

In contrast to a special plant, a general plant is purchased for use at two or more contracts.

For a general plant, an hourly, daily, weekly, or monthly rate of depreciation should be determined, and the amount of depreciation can be charged to each contract according to the actual use of the plant at the site of the contract.

The treatment of depreciation for a general plant is illustrated in the next example.

The plant was used for 73 days for Contract No. 31. Show the treatment of plant in Contract Account No. 31.

All expenses that have been incurred specifically for a particular contract (other than material cost and direct wages) are direct expenses, and they should be debited to the contract account.

Examples of direct expenses include hire charges of special plant (not owned), carriage on materials purchased, and travel expenses relating to the contract.

Since these expenses are incurred for the business as a whole, they are to be apportioned to the different contracts on some equitable basis.

Generally, work of a specialized character (e.g., road construction, installation of lifts, and use of electrical fittings) is passed onto another contractor by the main contractor.

Sometimes in a contract, the contractee may require additional work (or variations on the work originally contracted).

If the additional work is not substantial, the expenses incurred on extra work should be debited to the contract account as cost of extra work.

The extra amount that the contractee has agreed to pay to the contractor should be added to the original contract price.

In incomplete contracts, no entry is passed in respect of the contract price.

For an incomplete contract, the amount of work-in-progress to be included on the credit side of the contract account comprises:

In large contracts, the contractor periodically receives sums of money from the contractee. These sums are paid against invoices issued by the contractee’s architect, surveyor, or engineer regarding the value of the work completed so far.

(ii) Work Done but Not Certified

Work relating to an incomplete contract that has been done but has not yet been certified by the contractee’s engineer or architect is known as uncertified work (or work done but not certified).

Work done but not certified is the work done since the most recent certification, and it should be valued based on the actual cost.

At the beginning of the next accounting period, this amount is debited to the contract account and credited to the work-in-progress account.

Generally, contract terms specify that the whole of the amount shown by the architect’s certificate will not be paid to the contractor. Instead, a specified percentage (e.g., 10% or 20%) will be retained by the contractee until completion.

The money that is retained in this way is referred to as retention money.

To consider an example, suppose that the the total value of work certified is $100,000, and it is agreed that 20% of the work certified shall be retained till the completion of the contract.

Tap on the experts

When a contractor has accepted a contract, a separate account is opened for each contract, bringing together all the costs relating to a particular contract. A serial number is assigned to each contract, which is known as a contract account.

What are the debit elements of a contract account?

What does the contractor do with the retention money if the contract work is not completed?

What are financial lease instruments?

Financial lease instruments are long-term debt obligations that have characteristics of both loans and leases. A financial lease transfers most or all ownership rights to the lessee at the inception of a lease.

How are contract accounts prepared?

A separate 'contract account' is prepared for each contract for the purpose of costing. All costs related to a particular contract are also charged to the same. All expenses incurred for the implementation of that contract become direct costs.