Contract costing is the method of costing applied in a business where separate contracts of a non-repetitive nature are undertaken.

According to Sharie, “contract or terminal cost accounts are applicable to a concern which makes specific contracts and requires to know the cost of each.”

Contract costing is a form of job costing involving big jobs that require a considerable amount of time to complete and comprise numerous activities. A separate account is opened for each contract in the contract ledger or the general ledger.

The account is debited with all direct and indirect expenses and credited with the contract price on completion. The balance of this account is transferred to a profit and loss account.

However, if the contract is not completed before the end of the accounting period, a reasonable amount of profit (or logs) is transferred to a profit and loss account.

For materials, three specific forms of accounting may need to be performed. In case materials are purchased for the contract and directly delivered to the site of the contract, there arises no specific accounting system.

All labor used to complete the contract is direct labor and treated as such. The wages abstract is prepared to maintain a proper record and retain control over the labor expenses.

However, if it is acquired for a shorter period, the amount is only debited with the usual depreciation of the assets.

Any sale proceeds at the midway point of a contract or upon completion are credited to the contract account, and profit or loss on such a sale is transferred to the profit and loss account.

Indirect expenses are treated and apportioned in the same manner as any costing system.

The cost-plus contract involves the contractee agreeing to pay the contractor the cost price of the work carried out on the contract plus an agreed amount or percentage thereof by way of different overheads and profit.

An agreement may be in place to charge extra money for any addition(s) or alteration(s) to work originally agreed to be carried out under a particular contract. In such a case, the extra money becomes payable to the contractor by the contractee for all subsequent additions and alterations.

The contractor (if allowed to do so by the agreement entered into) may entrust a portion of the work to one or more than one sub-contractor(s). The cost in this connection is the direct charge on the contract and is treated as such in the contract costing.

A contract agreement usually makes a provision for the escalation clause: the contractor is interested in being safeguarded against any charge in the price level. The agreement specifies the procedure for the calculation of adjustment in order to avoid all disputes.

In the case of small contracts, the usual practice is to make the payment to the contractor in a lump sum upon completion.

However, in a large contract, the payment is made in installments on the basis of progress made. Progress is judged by technical personnel, such as architects, surveyors, and engineers.

Such personnel issue a certificate for the complete work, otherwise known as work certified, which may be expressed in terms of percentage. Here, the contractor may not pay for 100% work certification and may withhold or retain payment.

This is called retention money. The work for which certification is not granted is known as work uncertified.

The following are the ways the value of work certified is treated in cost accounts:

If the contract is not complete and the accounting year has come to a close, then the profit on incomplete contracts is required to be calculated and accounted for. In this respect, the following rules may be followed:

The main features of contract costing may be summarized as follows:

Contract costing is most suitable for ship-building, road construction, building construction, civil engineering works, and the like.

Contract costing, job costing, and terminal costing do not differ so far as the nature of the work involved is concerned.

A job is performed inside the factory premises and involves the simultaneous completion of different jobs; indirect expenses have to be apportioned to these jobs on an equitable basis.

Contract costing and job costing differ slightly from terminal costing because terminal costing involves a deadline fixed by the contractee within which a job or contract must be completed.

In case of a missed deadline, the contractor shall pay damages to the contractee on account of loss suffered due to the delay in the completion of the job or contract.

The main objectives of contract costing are:

A contractor maintains a contract ledger in which a separate account is opened for each contract they undertake. The contract ledger should be ruled out so as to provide maximum information.

A specimen ruling of the contract ledger is given below: 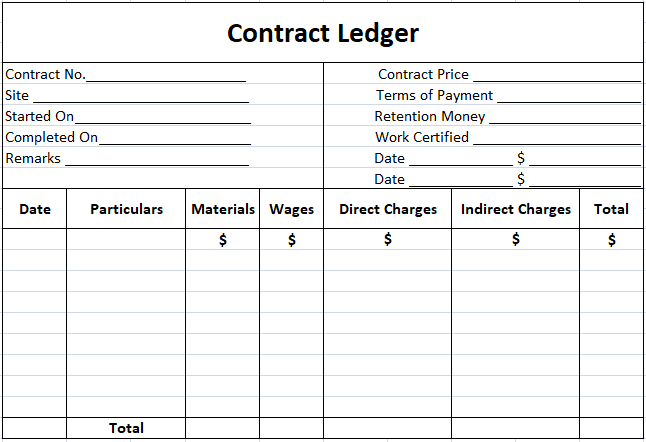 We hope that broadened your understanding on the concept behind contract costing. Topics like this are practically helpful and we wish to give you more outlets of learning. A financial advisor in Cold Spring Harbor, NY can discuss to you more about this and other relevant topics. If you live outside the vicinity, click on our financial advisor page to learn which areas we are currently servicing.

What is contract costing?

Contract costing is the method of costing applied in a business where separate contracts of a non-repetitive nature are undertaken.

Who are the people involved in a contract?

How does labor work in contract costing?

All labor used to complete the contract is direct labor and treated as such. The wages abstract is prepared to maintain a proper record and retain control over the labor expenses.

How do indirect expenses work in contract costing?

Indirect expenses are treated and apportioned in the same manner as any costing system.

What is an escalation clause?

A contract agreement usually makes a provision for the escalation clause: the contractor is interested in being safeguarded against any charge in the price level. The agreement specifies the procedure for the calculation of adjustment in order to avoid all disputes.