Suppose that a company has two divisions: Division A and Division B.

Division A sells to both Division B and other outside customers. However, Division B buys from only Division A.

The following unit costs were incurred by Division A for the coming year:

When Division B receives the units from Division A, it processes them further before selling them to customers.

The variable unit costs of Division B are $5 and its fixed costs for the year are $50,000. Division B sells all the units received from Division A at $35 each. 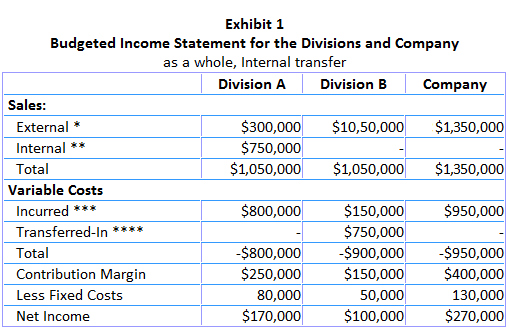 Exhibit 1 shows how transfer pricing affects each division’s income statement and the company as a whole.

Both amounts are not considered when preparing the overall company income statement.

This is done so as to provide the external users of financial statements with information relating to the economic activities of the company with outside parties and not internal transfers.

Now suppose that Division B is allowed to buy from outside suppliers.

An outside supplier has offered to supply the same type of units for $22 to Division B. Division A does not agree to reduce its price even though it has no alternative use of its production capacity. 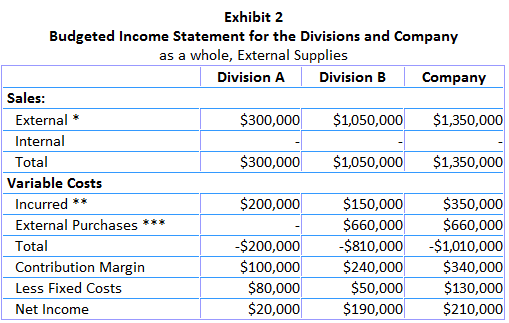 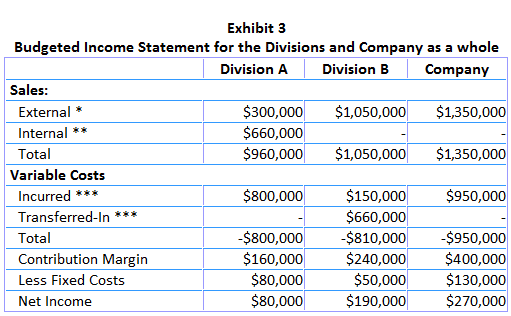 Finally, assume that Division A is willing to negotiate a transfer price with Division B for $22. Exhibit 3 shows the income statement for each division and the company as a whole with the negotiated transfer price.

Comparing Exhibits 1 and 3, the overall income of the company remains the same when there are internal transfers and the transfer price is reduced from $25 to $22.

Hence, transfer prices influence the profitability of both the buying and selling divisions. Performance evaluation of the divisional managers can also be done in a realistic manner.

The company-wide impact of transfer prices should be carefully examined to fully assess the results of the decisions involved in transfer pricing.

What are transfer prices?

Transfer pricing is the process of establishing the price at which one business unit within a company transfers goods or services to other business units within the same enterprise. It also refers to the similar process of setting the prices charged by a parent organization for various products and services provided to its subsidiary companies.

What are the various alternatives available to set transfer prices?

There are three types of transfer pricing techniques. These are (1) comparable uncontrolled price method, (2) resale price method, and (3) cost-plus method.

What is the difference between internal and external transfer prices?

What are the factors that influence setting of internal transfer prices?

What are the advantages of transfer pricing?

Transfer prices can reduce the amount of internal competition within a company, thereby aiding in better allocation of resources across different organizational units. It also helps in reducing inter-divisional conflict and increasing overall profitability.