After calculating depreciation using a suitable approach, it must be brought to books.

This account is debited by the amount of depreciation to be provided for the year. Alongside this, the fixed asset account concerned is credited by the same amount.

The effect of this entry is that the depreciation expense account shows the amount of expense for the year, while the fixed asset account shows a reduced balance.

The depreciation expense account, being a nominal account, is closed at the end of each financial year by transferring its balance to the profit and loss account.

ABC company purchased a motor vehicle for $75,000 on 1 January 2016. The company plans to provide depreciation at 20% per year using the reducing installment method. 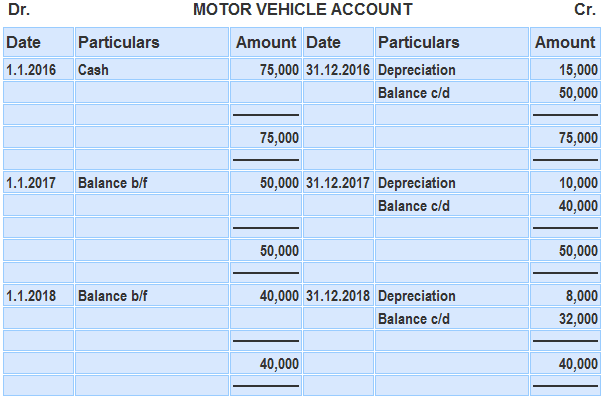 At the end of all three years, depreciation will appear on the debit side of the profit of loss account as an expense. It is shown below:

Are all assets subject to Depreciation?

While most assets will incur some measure of Depreciation, it is not possible to quantify Depreciation for each and every asset in the business.

What happens when an investor buys a machine?

The machine will invariably be bought at a certain price, often denoted by the term capital cost or acquisition price. The value of the machine will decline over time and hence needs to be accounted for via Depreciation.

What is a straight line Depreciation?

It is the simplest way to calculate Depreciation and it assumes that the value of an asset declines evenly over time, with no recognition of periods in which the asset has little or no value. This type of calculation will result in a consistent figure for each period.

Why do assets still have value after Depreciation?

As can be seen from the example above, an asset will continue to have some residual value even after the depreciable amount has been deducted. This is sometimes referred to as Salvage Value. Depreciation does not reflect this additional value.