A business may seek to provide for contingencies as per the concept of conservatism. These contingencies can broadly be classified into two categories:

(i) Unforeseen contingencies: Contingencies that the business is unsure about their nature and amounts (e.g., amounts set aside to prevent a reduction in the dividend rate due to a possible decline in profits).

(ii) Expected contingencies: Contingencies that are known to the business but whose amounts cannot be ascertained with reasonable accuracy (e.g., amounts set aside to meet losses due to bad debts or discounts to debtors).

The terms “reserves” and “provisions” have been used loosely in the past. This is due to the lack of universal definitions. However, the meanings of these two terms were clarified considerably in the Companies Act.

Although the provisions of the Companies Act are applicable only to companies registered under that Act, this article deals with reserves and provisions along the lines of the definitions stated in the Act.

The term “reserves” refers to any profits retained in the business that do not have any of the attributes of provisions. Also, provisions that exceed the amount considered necessary for the original purpose are regarded as reserves.

A reserve fund is a reserve against which there is a clearly earmarked investment outside the business. Thus, if the amount of the reserve is being used by the business itself, it cannot be called a reserve fund.

Reserves can be classified into the following categories:

An overview of these types of reserves is given in this section.

These reserves are created out of the revenue profits of the business. They can be categorized as follows:

1. Specific reserves: These reserves are created out of revenue profits for a specific purpose.

2. General reserves: These reserves are created only to strengthen the financial position of the business and to keep funds available for any future contingency or expenditure that may be required.

General reserves are also known as free reserves because they represent profits that are freely available for distribution. The contingency reserve or undistributed balance of the profit and loss account (after considering the debit balance, if any) also falls within this category.

For example, in the case of Lubbock vs. The British Bank of South America Ltd. (1882), it was held that profit on the sale of fixed assets can be used to declare dividends if the following conditions are satisfied:

The same ruling was also made in Foster vs. The New Trinidad Lake Asphalte Co. Ltd. (1900).

Capital profits that arise because of the revaluation of fixed assets cannot be distributed as dividends among shareholders.

Similarly, the amount used out of profits for the redemption of preference shares and transferred to the capital redemption reserve can be used only for the issuance of fully paid bonus shares.

A provision refers to an amount written off or retained to provide depreciation, renewals, or diminution in the value of assets, or retained by way of providing for any known liability for which the amount cannot be determined accurately.

Thus, provisions are amounts set aside out of profits and other surpluses for:

It can also be concluded from the above that sums set aside to meet known liabilities, of which the amount can be ascertained accurately, should be treated as accruals or accrued liabilities and not provisions.

Accounting for Reserves and Provisions

Reserves are the appropriation of profits. Hence, to create a reserve, the following journal entry is passed:

The reserves are shown on the liabilities side of the balance sheet under the proper heading or sub-heading. In the case of a company, they are shown under the heading “Reserves and Surplus,” as shown below:

Provisions are created by debiting the profit and loss account.

They are either deducted on the assets side of the balance sheet (as is the case with provision for depreciation or bad and doubtful debts) or shown on the liabilities side under the appropriate heading or sub-heading.

Extracts from a proforma profit and loss account and balance sheet are given below for better clarity. 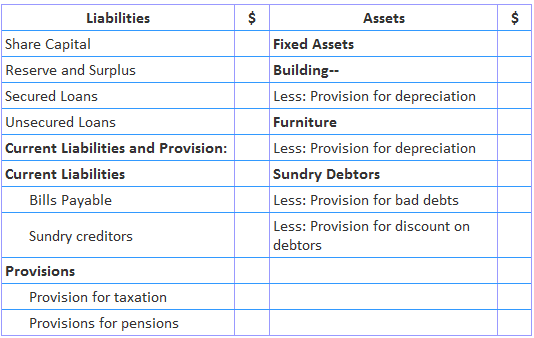 What is reserves and provision journal entry?

A reserves and provision journal entry is an accounting Bookkeeping entry where certain items are recognized in the books of account under the respective headings.

Is a provision always created equal to what has been estimated?

No, it isn't. The actual provisions that are required should be identified for all items that require to be set aside as per the rule of prudence.

How is the reserve created in accounting?

The provision for Depreciation is debited to the profit and loss account as per the rates of Depreciation allowed. As such, it represents an expense. The amount thus passed as debit balance reduces the value of assets that remain on books of account at a reduced cost or value bringing them down to their final book.

Why is there a difference between provision and reserve?

How do I know if I should create a provision or reserve?