When calculating earnings per share (EPS), including the effects of a potentially dilutive security sometimes produces a higher per-share figure. This effect is known as anti-dilution.

In this article, three aspects of anti-dilution are discussed in more detail.

Opposite Effects on EPS Before and After Extraordinary Items

Despite this result, the anti-dilutive security should be included in the calculation of a fully diluted EPS.

It has an issue of preferred stock on which it paid $1,000,000 of dividends, and which is convertible to 400,000 common shares. The preferred stock is not considered to be equivalent to the common stock.

If there were 1,400,000 outstanding common shares, EPS calculations would be made as shown in the table below. 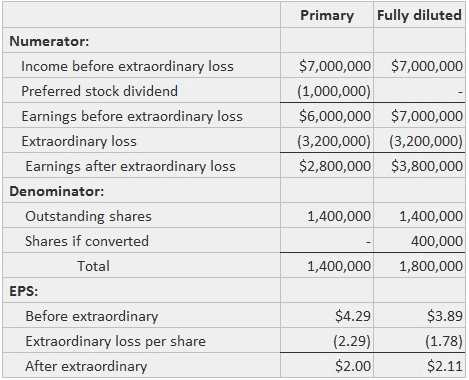 Despite the fact that the fully diluted EPS is larger than the primary EPS, both results must be disclosed.

When an ordinary loss occurs in a year, all potential savings from conversions and all potential increases in the number of shares are anti-dilutive. This is because the loss per share is reduced when they are included.

That is to say, the fully diluted loss per share would be smaller than the primary loss per share, and this result would not be consistent with the worst-case assumption.

Therefore, neither of these potentially dilutive securities (or any others) would be included in the calculation of EPS, even if they were common stock equivalents.

When more than two potentially dilutive securities exist, anti-dilutive effects can be harder to detect.

The easiest approach to obtaining the most diluted EPS involves ranking the securities from most to least dilutive in terms of the savings per common share that would have been achieved if the shares had been issued.

Then, each is brought into the calculation of primary or fully diluted EPS until it is reduced to the smallest possible figure.

To demonstrate, assume that the Sample Company has reported a net income of $1,000,000 divided among 100,000 shares, adjusted for common stock equivalents. Further, suppose that the following convertible bonds are outstanding:

To determine if this point is maximum dilution, alternate calculations can be made. These calculations involve bringing in the savings and new shares in order from the most to the least dilutive.

Group C will not be dilutive because its savings per share of $4.50 is larger than the $4.30 just obtained. Thus, the $4.30 figure is the smallest fully diluted figure and should be reported on Sample’s income statement.

What is the primary eps?

The primary eps is the net income divided by the number of shares outstanding at the end of a reporting period. It is not adjusted for stock equivalents (such as options, warrants, and convertible securities).

What is a diluted eps?

Diluted eps takes into account all stock equivalents outstanding during a reporting period.

How are anti-dilutive securities handled in eps calculations?

Stock equivalents potentially dilute eps when they provide a mechanism by which net income may be distributed to shareholders in the form of dividends or share repurchases.

What are some problems that may arise in calculating diluted eps?

If certain securities are potentially dilutive but have no value to the investor, they are considered "anti-dilutive" and are removed from the diluted eps calculation. The calculation of diluted eps may also be complicated or confusing if there are many possible security types. It also becomes more difficult to determine the number of shares outstanding at a given time as more security types are introduced.