Convertible bonds are convertible into the firm’s common stock at some future specified date. For this reason, they enable the bondholder to obtain an equity interest in the firm eventually.

This conversion feature allows the firm to issue the bond at a lower interest rate.

First, if they are converted, the firm avoids the interest expense that it would have incurred.

Second, the number of common shares is increased by the conversion. The actual effect on reported EPS depends on whether they are considered to be common stock equivalents.

In general, convertible bonds are equivalent to stock if the initial investors appear to have bought them for their convertibility, and if this intent is indicated by accepting a lower yield than they would have obtained had they simply bought bonds.

Specifically, a test calls for a comparison of the cash yield (cash interest payment divided by the issue price) of the bond with a cutoff rate. If the yield is less than the cutoff rate, the bonds are considered equivalent for as long as they are outstanding.

Consequently, group A would be classified as equivalent to common stock but group B would not be considered to be equivalent.

Other tests that could have produced different results were rejected. These include:

It is worth noting that tests can be applied every year instead of only at the time of issuance. However, certain tests are too subjective and not sufficiently practicable.

Impact of Convertible Bonds on EPS

If the assumption is made that the bonds have been converted, an accountant should add to the denominator the number of common shares that would be issued if all the bonds were exchanged.

For the numerator, it is necessary to calculate the interest expense saved (including amortization) less the additional taxes that would have been paid.

For example, if EPS before conversion is $12 per share, any net savings per new share in excess of $12 will increase the average.

Suppose that the Sample Company has three issues of convertible bonds outstanding. Each has a face value of $10,000,000 and is convertible to 250,000 common shares.

The following facts are known about each group:

The test for equivalency is shown below:

The impact on the EPS denominators is presented in this table:

The numerator is affected as follows (assuming straight-line amortization and 20-year lifetimes):

The EPS calculations are shown below, including simple EPS. This shows the extent of dilution (the net income and outstanding shares are assumed): 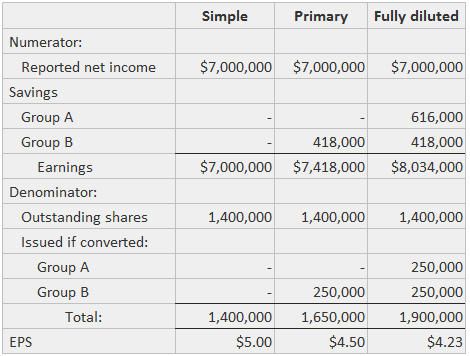 Conversion or Issuance of Convertible Bonds During the Period

If convertible bonds are actually converted during the period, EPS figures are calculated as if the bonds were converted at the beginning of the period (this same assumption is made for bonds that are not converted).

However, the numerator is adjusted only for the interest costs (net of tax) that are actually incurred during the part of the year in which they were outstanding.

For newly issued convertible bonds, the numerator is adjusted only for the interest expense (net of tax) that is actually incurred during the part of the year in which they are outstanding.

The number of hypothetical common shares that would have been issued is weighted by the fraction of the year that the bonds were outstanding.

What are convertible bonds?

Are convertible bonds a good investment?

A convertible bond allows the buyer to obtain the potentially large return associated with stocks without taking on the associated risk.

What are the advantages of convertible bonds?

Convertible bonds are not as risky as common shares or preferred shares. Their value can fall only to the value of the bond floor, providing some safety. At the same time, their value can rise as high as their conversion rate, which would be similar to the possible payoff from a stock.

Can you lose money on convertible bonds?

Although convertibles have more potential for gain than traditional bonds, if the issuer defaults (or does not pay its interest and principal on time), you can lose money on them.

How do convertible bonds affect a balance sheet?

When the convertible bonds have been issued and sold, the business will take in cash, which will increase its assets. On the other side of the balance sheet, liabilities will increase by an equivalent amount.