EPS and Materiality Concept of Accounting

To simplify the presentation of earnings per share (EPS) numbers, the generally accepted accounting principles (GAAP) allow firms not to disclose the effects of dilution when the result is immaterial.

Rather than leave that judgment to individual accountants, the GAAP specified a 3% threshold for determining whether the effects of dilution are material or not.

It should be noted that the materiality test is not mandatory but only a voluntary guideline. Thus, firms only have to comply if they want to or if there is material dilution in one year but not the other when comparative statements are presented.

From these facts, we can proceed to perform the calculations necessary to provide the EPS information required.

There are three groups of common shares:

Schedule 1 below shows the calculation of the weighted average which is used in this example to calculate the EPS figures.

All of the warrants outstanding at the end of 20×4 are exercisable within the next five years and have exercise prices ($30 and $45) below the last quarter‘s market value. Consequently, all are to be considered dilutive for primary and fully diluted EPS.

The treasury stock method can be applied without concern for the 20% test because cash produced upon exercise would be insufficient for acquiring more than 253,600 shares (20% of the year-end total of 1,268,000 shares).

Schedule 2 shows the calculation of the effect of the warrants on the denominator of primary EPS.

Group B was outstanding for seven months and group C for only four months. A total of 21,726 equivalent shares is added to the denominator for primary EPS in the below example. 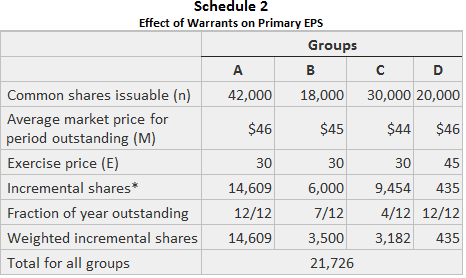 Schedule 3 shows the calculation of the effect of the warrants on the denominator of fully diluted EPS.

The number of incremental shares should also be weighted by the fraction of the year that the warrants were in effect.

Because the year-end market value ($49) was higher than the average for the year ($46), it is used for groups A and D. The total of 24,117 equivalent shares is added to the denominator for fully diluted EPS in the below example. 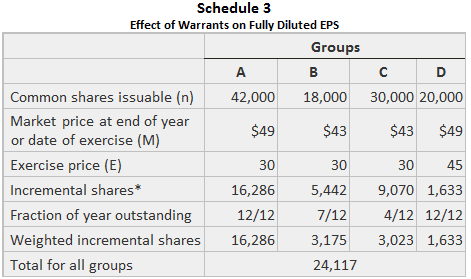 Since convertible preferred stock cannot be converted until six years after 31 December 20×4, there is no need to test for its equivalency to common stock or to assume its conversion for the computation of primary EPS.

Thus, the only effect on primary EPS is the deduction of the declared dividends of $168,750 from the numerator.

For fully diluted EPS, conversion should be assumed because it can take place within the next ten years. The numerator, therefore, does not show any adjustment for dividends.

Thus, 150,000 shares are added to the denominator in the below example.

Convertible bonds are exercisable within five years and need to be tested for equivalency. Their cash yield of 5% equals their nominal rate because they were issued at face.

This rate is below 51/3% (two-thirds of the prime rate of 8%). Therefore, the bonds are considered to be equivalent to common stock.

Consequently, conversion is assumed for both primary and fully diluted EPS. The calculation of the numerator adjustment is seen below:

The denominators are both increased by 60,000 shares (see the below example).

At the end of 20×4, Example Company had not met the condition stated in the contingent issuance agreement of annual income of $2,500,000. Consequently, the agreement should be considered only for fully diluted EPS.

In making the calculation, it is necessary to assume that the income actually reached the stated level, after considering the interest savings that would have been achieved if the bonds had been converted.

The adjustment to the numerator is calculated as follows:

The denominator is increased by 160,000 shares. 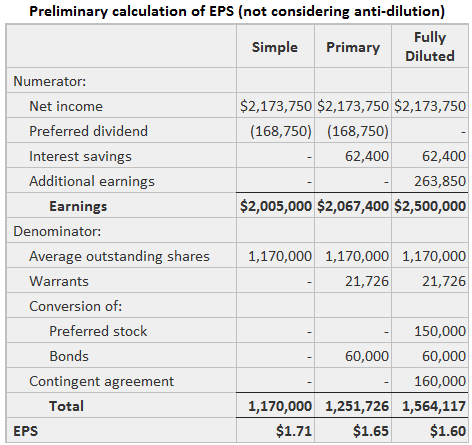 How can I calculate net income for the purposes of determining whether an event is a material?

If you are not able to obtain or construct a time series of historical earnings per share, it may be possible to calculate them based on the latest reported quarterly figures. Annualize these by multiplying by four so that you have annual figures. Then, adjust the figures for non-recurring items by taking away any one-time or extraordinary items that are not expected to reoccur in future periods. Add back any income tax effects of these items.

How do I calculate fully diluted EPS if there were no options outstanding at year-end?

If you are calculating fully diluted EPS, the denominator should be increased by all potential shares that are in issue. This means that you need to include future share issues such as contingent shares and convertible securities. In the event that there were no options outstanding at year-end, then convertible securities would be included instead of options in the calculation – i.e. you would add the number of shares that could be issued if those securities were converted to the denominator.

What is a derivative instrument and how is it treated for earnings per share purposes?

A 'derivative instrument' can include convertible debt, options, warrants etc., where their value depends on movements in an underlying asset (for example, share price). When computing fully diluted EPS, these instruments are included in the denominator (in other words, they are treated like any other conversion or exercisable option), unless they meet certain criteria. This is because under IFRS 2 they would otherwise be classified as equity instruments and subject to some complex Accounting Procedures if their terms did not permit them to be converted or exercised.

What is a contingent consideration and how is it treated for earnings per share purposes?

A 'contingent consideration' is an obligation of the company whose value depends on future events, such as the sale of a subsidiary, and may include the potential for additional payments that would increase or decrease depending on the performance of that subsidiary. These are treated like any other potential future issue (e.g. convertible securities), and included in the denominator if their terms do not prevent them from being converted or exercised.