Leverage that is associated with investment activities or asset acquisition is called operating leverage.

In fact, the relationship between sales revenue and EBIT is referred to as operating leverage because when the sales level increases or decreases, EBIT also changes.

This means that operating leverage measures the relationship between sales revenue and EBIT.

Whether an enterprise has fixed operating expenses in its income is the factor that determines operating leverage. Normally, the operating cost of an enterprise falls into one of three categories:

Fixed costs do not vary with the volume of sales, whereas variable costs vary directly with sales volume.

Semi-variable or semi-fixed costs are partly variable and partly fixed. This means that they are fixed up to a certain sales volume, varying to higher levels when production and sales volume increase.

If the semi-variable or semi-fixed costs can be apportioned appropriately into variable and fixed components, then the costs of the firm remain of two categories: fixed and variable.

In fact, operating leverage occurs when a firm has fixed costs that need to be met regardless of the change in sales volume. The enterprise invests in fixed assets aiming for the volume to produce revenues that cover all fixed and variable costs.

After calculating the leverage by applying the formula, if the result is equal to 1, then the operating leverage indicates that there are no fixed costs, and the total cost is variable in nature. This means that EBIT varies in direct proportion to the sales level. 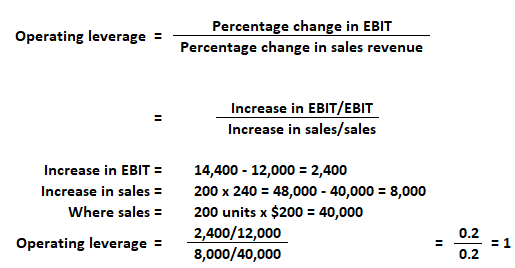 Note: In this example, EBIT varies directly in proportion to sales.

Required: Suppose that the company has fixed costs of $10,000, along with the variable cost of 140 per unit. What are the present and expected costs and EBIT? What is the operating leverage?

For answers, see the tables below. 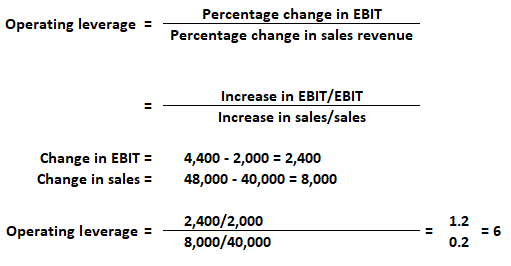 In the above example, EBIT varied disproportionately to sales. This variation of one time or six-time (the above example) is known as degree of operating leverage (DOL).

The DOL at any particular sale volume may also be calculated as a ratio of contribution to the EBIT. In other words:

In the above example, DOL is calculated as follows:

This information shows that at the present level of operating sales (200 units), the change from this level has a DOL of 6 times.

However, if the company’s expected sales are 240 units, then the change from this level would have a DOL of 3.27 times. This example indicates that the company will have different DOL values at different levels of operations.

One important point to be noted is that if the company is operating at the break-even level (i.e., the contribution is equal to the fixed costs and EBIT is zero), then defining DOL becomes difficult.

Operating Leverage in a Nutshell

Learn more about how operating leverage can impact your business by connecting with a financial advisor in Peabody, MA. If you live outside the area, please visit our financial advisor page to receive a list of the areas we are currently serving.

What is operating leverage?

Running a business incurs a lot of costs, and not all these costs are variable. In other words, there are some costs that have to be paid even if the company has no sales. These types of expenses are called fixed costs, and this is where Operating Leverage comes from. As it pertains to small businesses, it refers to the degree of increase in costs relative to the degree of increase in sales.

How does operating leverage work?

Operating Leverage is a financial ratio that measures the lift or drag on earnings that are brought about by changes in volume, which impacts fixed costs. Many small businesses have this type of cost structure, and it is defined as the change in earnings for a given change in sales.

What are the benefits of operating leverage?

The benefit that results from this type of cost structure is that, if sales increase, the company's profits will also increase correspondingly. The converse is also true—if sales go down, it means lower profits.

What are the drawbacks of operating leverage?

Since profits increase with volume, returns tend to be higher if volume is increased. The challenge that this type of business structure presents is that it also means that there will be serious declines in earnings if sales fall off. This does not only impact current Cash Flow, but it may also affect future Cash Flow as well.

How can operating leverage be improved?

Operating Leverage is controlled by purchasing or outsourcing some of the company's processes or services instead of keeping it integral to the company. Another way to control this operational expense line item is to reduce unnecessary expenses, especially during slow seasons when sales are low.