Leverage refers to the use of an asset or source of funds for which the enterprise has to pay a fixed cost or fixed return.

In other words, it refers to a relationship between two variables. Such variables include cost, output, sales, revenue, earnings before interest and taxes (EBIT), or earnings per share (EPS), among others.

Financing decisions are based on two important aspects:

If an enterprise can estimate how much capital is needed, the next task is to determine the optimal mix of fundraising sources. This process is called capital structure planning.

What Is Leverage Analysis?

In leverage analysis, the emphasis is on measuring the relationships between two variables rather than the variables themselves.

Due to the advertising spend, the company increased its units sold from 500 to 750 units, representing an increase of 50%.

In this example, leverage is calculated as:

This reflects that the operating profit of an enterprise is directly influenced by sales revenue.

What Is Favorable and Unfavorable Leverage?

Favorable leverage means that the sum of earnings before interest and taxes exceeds the fixed return requirement. In other words, the total of earnings less variable costs is greater than fixed costs.

If the value of earnings less variable costs falls below fixed costs, the leverage is considered to be unfavorable.

Operating profit determines the profit available to shareholders. This is illustrated in the table below. 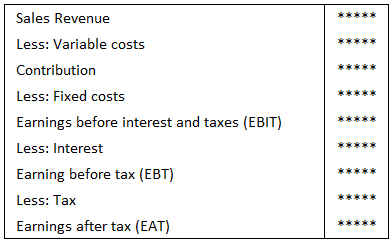 Note: Earnings after tax is available to equity shareholders for distribution.

Thus, earnings per share (EPS) = Profit after tax / No. of shares eligible for distribution of profit to shareholders.

The statement illustrated above shows the functional relationship between sales revenue and EPS, which is established through operating profits (EBIT).

A company’s managers aim to maximize shareholder wealth, which means it is necessary to maximize the market price of shares by heightening EPS. Thus, leverage helps management make decisions in this regard.

The most commonly used leverages are:

In some cases, managers may use combined leverage.

How to Evaluate the Result of Leverages

1. High operating leverage and high financial leverage: This situation suggests high risk. Any slight change in sales or contribution may affect the EPS to a large extent. Managers should avoid such situations.

2. High operating leverage and low financial leverage: In this situation, the existence of high fixed costs may affect EBIT, if there is a slight decrease in sales or contribution. This slight change may be addressed with low-cost debt.

Any slight decrease in sales or contribution may not affect EBIT to a large extent, given that the component of fixed cost is negligible in the cost structure.

4. Low operating leverage and low financial leverage: This situation indicates that managers are following a very cautious policy. This is also known as the policy of contentment.

Any slight decrease in sales or contribution may not affect the EBIT to a large extent because the fixed cost component is negligible in the overall cost structure. Also, the manager has not taken a significant risk in formulating the capital structure.

5. Combined leverage: When making decisions based on combined leverage, managers should be cautious to note the influence of operating and financial leverages.

If the influence of the financial leverage is slightly high, the result of the combined leverage may be taken for a positive decision.

However, managers should apply leverage analysis based on the company’s ability to take risks to maximize shareholder wealth, reduce the cost structure, and enhance EBIT. Managers should not only be influenced by the high EPS rates.

Important Formulas Used in Leverage Analysis: At a Glance

If the company uses preference shares in its capital structure, preference dividends should also be included in the finance charge. Under such circumstances, financial leverage is calculated as:

What is financial leverage?

Financial leverage is the use of debt in combination with equity in capital structure. Managers may decide to take on more debt than the proportionate amount in order to increase EPS. The degree of financial leverage shows how much the EBIT changes if there is a certain change in sales revenue after deducting the component of interest. Financial leverage increases Operating Leverage and, consequently, increases Contribution Margin as well.

What is operating leverage?

What is combined leverage?

How do I calculate leverage in accounting?

There are a few different ways to calculate leverage in accounting. One common method is to use the debt-to-equity ratio, which you can calculate by dividing a company's total debt by its shareholder equity.

What are some of the risks associated with leverage?

Leverage can be a double-edged sword. While it can help a company finance its growth and expand its operations, it can also increase a company's financial risk. If a company takes on too much debt, it may find itself unable to make its interest payments, which could lead to bankruptcy.