What Is Window Dressing?

Window dressing is when managers in an organization take measures to make their financial statements appear better than they actually are.

The basic idea of window dressing is to mislead shareholders and investors by presenting a favorable picture of the organization’s performance.

For example, if a company has many shareholders who lack an in-depth operational knowledge of the business, window dressing may be used to make financial information look attractive to them.

Companies need to publish accounting information according to the rules laid down by statutory and professional bodies.

These rules govern the structure and contents of accounts, the dates by which accounts must be published, and how figures should be presented.

Given the complexity of the rules and regulations prescribed by different governing bodies, there is always scope to interpret them in a way that is advantageous for the manager or management team.

Motivated by the ‘opportunity of interpretation’, managers (either on their own or under the influence of directors) bend the rules, re-interpret them, or ignore them entirely to present a better picture of their performance through the financial statements.

The information provided based on such discretion (i.e., interpreting or misinterpreting the rules and regulations) appears to be true but is not true.

This means that, through window dressing, organizations have an opportunity to depict a rosier-than-reality picture to information users.

Window Dressing, But Why?

Businesses use window dressing for diverse reasons. Here are a few:

One of the simple methods of window dressing (without the use of creative accounting) involves presenting statistical information in a way that improves the appearance of an enterprise’s performance.

For example, in a graph, a high base figure may be used for the vertical axis. This exaggerates any increases, giving the impression of significant improvement that, as a matter of fact, doesn’t match reality.

The simplest and most common way of practicing window dressing involves presenting statistical information in such a way as to improve the way an enterprise’s performance appears to clients, shareholders, or investors.

For example, assume that a company has one division performing well and five doing poorly.

For example, figures can be ‘massaged’ so that they can be misrepresented, or window dressing may be applied through creative accounting. Several examples of window dressing are discussed in the next sections.

Brands have become a great deal more valuable in recent times. Taking advantage of this, many enterprises adjust the strength of their balance sheets by revaluing their brands (assets).

Increasing a brand valuation will increase the strength of the enterprise, at least on paper. In most cases, increasing brand value is recorded by a revaluation procedure to defend takeovers.

Suppose that the recorded value of the brand (asset) is $25.00 and it is revalued at $50.00 and shown on the organization’s balance sheet. Due to this, the intended buyer will think twice before negotiating for a takeover.

The reason for this is that it is the owner who knows the true value of the brand and not the intended buyer (outsider).

Depending on the level of losses on assets, profit can be increased and losses can be minimized. As such, another approach to window dressing involves hiding the cost of poor investments.

An enterprise can improve its liquidity through sale and leaseback transactions. The starting point for such transactions is to sell large capital assets, thereby increasing cash flow.

In turn, by leasing back the same asset at a cost that is chargeable to revenue, revenue generation remains unaffected. Alongside this, substantial funds are made available for developmental activities.

In recent times, sale and leaseback transactions have emerged as a normal business practice. The practice has even been adapted to improve short-term cash situations and, therefore, to improve the current asset ratio and liquidity.

If this process is carried out for short-term liquidity reasons, questions should arise over long-term business performance.

It should be noted that such a practice is neither illegal nor unethical, and it is within the ambit of accounting practices (as guided by relevant governing bodies).

Window dressing may also be done through the use of exceptional and extraordinary items. This involves including the cost and revenues that arise from normal business activity but are unusual in some way.

For example, redundancy costs are normal in business, but these are exceptional items. Similarly, revenues that arise only a single time and, as such, that are unusual and unlikely to be repeated, are considered exceptional items.

As these items do not occur due to normal business activity, they should be highlighted and included only after calculating profit before interest and tax. If such items are included as normal items, this means that regular profit is understated or overstated.

Choosing a convenient time for reporting is another way to engage in window dressing. To see this, let’s consider the example of an enterprise that has been operating throughout the year with a negative bank balance.

Naturally, the company’s manager would like to avoid showing the previous year’s financial position on the balance sheet. Therefore, the manager postpones payments that should have been made in the last week before the end of the financial year.

Due to the manager’s actions, the balance sheet will show a positive bank balance despite the company’s performance over the previous year.

As a result, this projects a good liquidity position to any outsiders who may review the enterprise’s financial statements.

Of course, after the postponed payments are made (in this case, after the date by which the balance sheets needed to be prepared), the bank balance will fall back into negative territory.

Crucial information of this kind, which is essential for determining the liquidity of the enterprise, is window-dressed by choosing a convenient time of reporting.

Choosing a convenient method of depreciation is another window dressing approach that can depict a rosy picture for an enterprise.

For example, by choosing the fixed installment method of charging depreciation instead of the reducing balance method, it is possible to boost profits.

Finally, the residual values of an organization’s assets can be altered to window dress the balance sheet.

As all of the above examples indicate, it is possible to engage in window dressing in diverse ways to present a rosier-than-reality picture of a business.

Window dressing that is done to serve a positive purpose, without violating the principles and standards of accounting, is not considered illegal.

However, fraudulent practices that are indulged under the umbrella of window dressing are punishable under the law.

All accounting professionals, account analysts, credit rating agencies, and other professional bodies are aware of window dressing. Therefore, to gain a true sense of an enterprise’s financial position, nothing should be taken at face value.

In particular, it is important to examine the enterprise’s balance sheet and profit and loss account in detail, paying special attention to a comparison against major competitors and industry standards.

In the case of machinery and depreciation, the following questions would be pursued in a detailed examination:

The following information was extracted from the books of Goodluck Company Ltd for the year 2019-20.

As indicated, the company’s net profit before tax during the year is 20% less compared to the previous year.

Therefore, disappointed with this operating performance, the manager decided to window dress the figures to boost the profits, the aim being to suggest to shareholders that operating efficiency is good.

The following steps were taken to achieve this goal:

The balance sheet of the company before window dressing stood as follows: 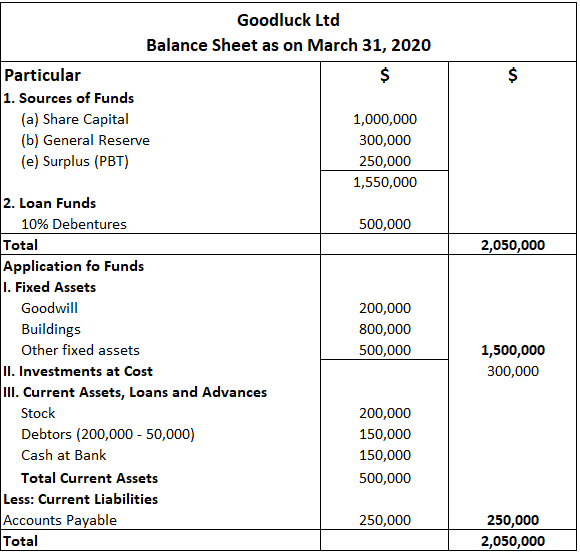 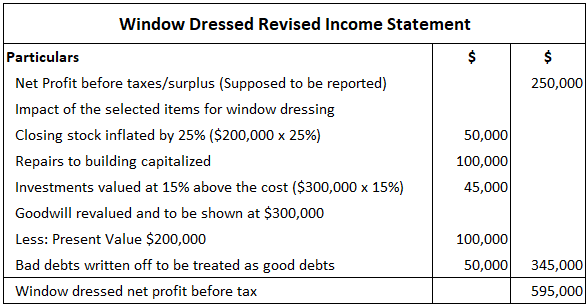 Note: Students should note that the above statement is prepared only to illustrate how window dressing helps to boost profits (on paper).

They are all hidden adjustments that are known only to the accounts manager and to no one else. That is to say, these figures are not recorded at all. 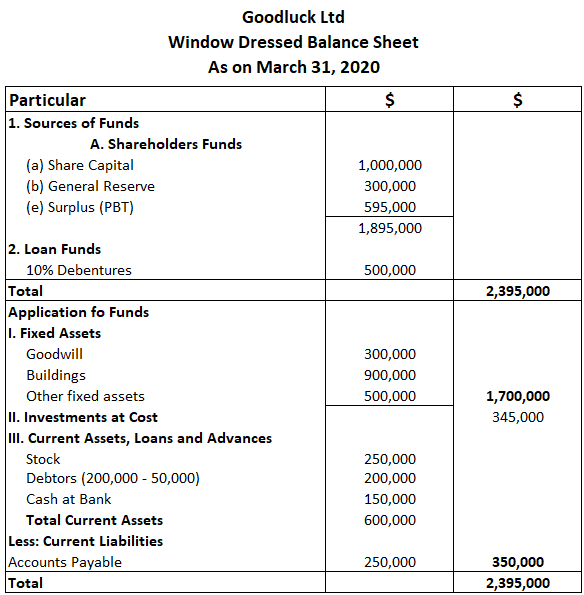 Note: The major drawback of this decision is that the company will have to pay corporate tax on boosted profits (i.e., profits recorded on window-dressed accounts).