Double-entry accounting is the system of accounting in which each transaction has equal debit and credit effects. This ensures that the accounting equation remains in balance.

History of Double-Entry System of Accounting

In the sixteenth century, Venice had trade relations with different parts of the world through various channels. The double-entry system was introduced in Great Britain and other parts of the world, eventually making its way to Venice.

Every business transaction has two effects or “changes” on an account.

The system of bookkeeping under which both changes in a transaction are recorded together at an equal amount (one known as “credit” and the other as “debit”) is known as the double-entry system.

Concept of the Double-Entry System

It follows that the bookkeeping system must always balance, which is a big advantage. Some types of mistakes will cause the system to be out of balance; as a result, the bookkeeper will be alerted to a problem.

The term “double-entry” should not be taken to imply that two transactions are entered. It means that an inherent feature of a single transaction is that it is entered into two different accounts: in one as a debit and in another as a credit.

For example, consider receiving a check for $5,000 as a vehicle insurance provider. To account for this transaction, $5,000 is entered into the insurance account as a debit. This account will eventually be a charge in the profit and loss account.

This system of accounting is named the double-entry system because every transaction has two aspects, both of which are recorded.

Every transaction involves two parts: one involves receiving benefit and the other giving benefit. These are also termed as two-fold aspects.

Under the double-entry system of accounting, each business transaction affects at least two accounts. One of these accounts must be debited and the other credited, both with equal amounts.

Since every transaction affects at least two accounts, we must make two entries for each transaction to fully record its impact on the books. One of the entries is a debit entry and the other a credit entry, both for equal amounts.

Very simply, the double-entry system states that at least two entries must be made for each business transaction, one a debit entry and another a credit entry, both of equal amounts.

Nowadays, the double-entry system of accounting is used all over the world. This is because it is the only reliable system for recording business transactions.

The founding father of the double-entry system was a Franciscan monk called Luca Pacioli. He did not invent it, but in 1493 he wrote down the principles of the system used by himself and others.

Given his calling, Pacioli must have been a man of considerable education and wide-ranging interests. His work has stood the test of time because the fundamental principles are timeless.

If Pacioli could visit a modern accounts department, he would recognize that his principles were still regularly applied in practice. He might be surprised by computers, but the basic core of accounting remains the same.

Under the double-entry system, the ledger contains a number of accounts, perhaps just a few or perhaps many thousands.

The above section of this article gave an example of a check for $5,000 to pay an insurance premium.

This resulted in postings to the Insurance Account and the Bank Account. Each account has a separate page in the ledger, though in practice the records are likely to be computerized. In a manual system, the layout of each account will be the same.

The following show the two entries resulting from the payment of the insurance premium.

As you look at these accounts, please keep in mind:

It’s now time to list and explain the three fundamental rules that apply today, all of which Luca Pacioli would undoubtedly recognize.

1. Debit on the left, credit on the right

Why this way round?

A long time ago, most people did it this way, with debit on the left and credit on the right. So that’s the way we all do it today.

On my first morning as a trainee accountant, I was told that debit was nearest the window. Also, I heard it was best not to talk to the boss until he’d had a cup of tea.

I found both pieces of advice invaluable, but I always sat with my left shoulder next to the glass.

Again, why this way round? As before, the reason is that it was decided a long time ago, and that’s the way it is.

The rule may be hard to grasp. Also, it’s probably the opposite of what you would expect based on instinct. After all, your bank statement is credited when money is paid into your bank account.

But look at it from the bank’s point of view. It’s the bank that issues the statement. The bank’s records are a mirror image of your records, so credit for the bank is a debit for you, and vice versa.

It may help you to remember the rules if you keep in mind that assets in the balance sheet and costs in the profit and loss account are both debits.

Therefore, if you buy a new factory or if you buy some postage stamps, the appropriate accounts will be debited.

Liabilities in the balance sheet and income in the profit and loss account are both credits. So, if you buy something on credit, the amount is credited to the supplier’s account. This is because it is a liability.

Similarly, if you make a sale, the amount is credited to the sales account. It will eventually contribute to revenue in the profit and loss account.

3. For every debit, there must be a credit

Scientists sometimes help themselves remember this rule by thinking about the law of physics: for every action, there is an equal and opposite reaction.

We have already seen how this works in relation to the insurance premium payment of $5,000, but it is not always so straightforward. In fact, it may be exceedingly complicated.

A batch of postings may include a large number of debits and credits, but the total of the debits must always equal the total of credits. If they are not equal, a mistake has been made.

For example, consider the entries resulting from an approved expense claim. The amounts are large, so perhaps the expenses were incurred by a senior manager or just possibly a journalist. 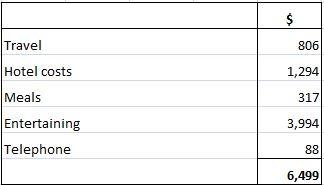 To account for this expense claim, five individual accounts would be debited with a total of $6,499. One account would be credited with $6,499.

In this case, remember the first fundamental rule of the double-entry system of accounting: for every debit, there must be a credit. There are no exceptions.

The rule even ranks alongside: the sun always rises in the east, water does not flow uphill, and A government initiative to cut bureaucracy always creates extra work.

Three Examples of Postings in the Double-Entry System of Accounting

A receipt of $3,000 from Sam, the debtor, is recorded on the debit side of the Cash In Hand Account (as this asset is increasing) and on the credit side of Sam’s account (as the amount due from him is decreasing). The entries in both accounts are $3,000.

Furniture costing $2,500 is purchased on credit from Fine Furniture.

The purchase of furniture on credit for $2,500 from Fine Furniture is recorded on the debit side of the account (because furniture is an asset and is increasing).

Also, a corresponding entry of $2,500 is made on the credit side of the account because the liability to this creditor is increasing.

A business owner draws $500 in cash from their business cash box for personal use.

An entry of $500 is made on the debit side of the Capital Account because the owner’s capital in the business has been reduced.

Also, an entry for the same amount is made on the credit side of the Cash In Hand Account because cash is an asset and is decreasing.

Why is this accounting method called double-entry?

The term “double entry” has nothing to do with the number of entries made in a business account. Rather, it relates to the two-sided nature of every transaction. For every transaction there is an increase (or decrease) in one side of an account and an equal decrease (or increase) in the other.

What is the practical application of double-entry?

Double-entry accounting has been used for at least six centuries and is still widely used today, because it makes business accounting much easier to understand and verify than with other methods such as cash basis or nominal ledger. It also provides an accurate record of all transactions, which can help to reduce the risk of fraud.

What is a debit and what is a credit?

The basic rule is: if you are increasing the value of an account, debit; if you are decreasing it, credit. Another rule of thumb is that the left side (debit) is for expenses and losses, while the right-hand side (credit) is for income and gains. This is because financial transactions normally move money from one party to another in exchange for goods or services.

You need to prepare 2 copies of your book of accounts. One copy should be kept by the proprietor (this is known as decedent’s copy). The other one will be forwarded to the tax department (to make sure that income taxes are paid on time).