In this article, the data for the Cerf Company shown below will be used to demonstrate the calculations that are needed to apply three cost flow assumptions and the specific identification method.

Three points should be made about this example.

First, it is overly simplistic in that only six purchases are made during the year. However, the procedures used in this example hold for more complex, real-world purchasing patterns.

Third, each of these methods is an alternative under generally accepted accounting principles (GAAP). 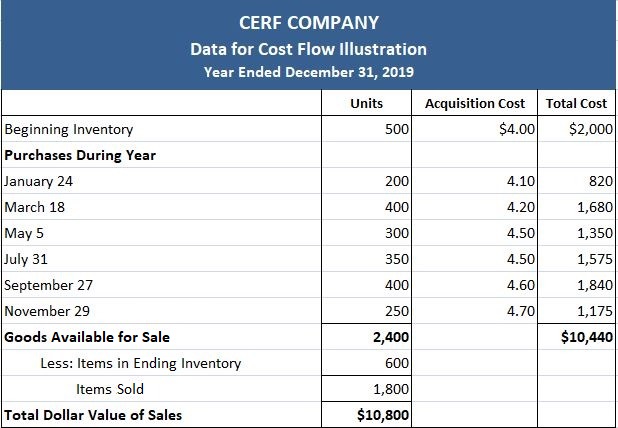 First In, First Out (FIFO)

Using the data for Cerf Company shown above, the cost of the ending inventory under FIFO is $2,785 and the cost of goods sold is $7,655. These figures are determined as follows:

As the preceding figures indicate, the 600 units in the ending inventory consist of:

The 50 items remaining from the 27 September purchase, as well as the units from prior purchases and the beginning inventory, are assumed to have been sold. However, we could directly calculate the cost of goods sold as follows:

This approach is rarely used because firms sell many more goods than they have on hand at the end of the year, and so it is easier to count the smallest number (i.e., what is left).

In 2019, the ending inventory for 2018 of $2,785 becomes the beginning inventory. Although this inventory consists of 2 distinct layers of 250 and 350 units, respectively, each purchased at different prices, it is usually not necessary to maintain these layers.

The inventory can be brought forward as 600 units at a cost of $2,785. The reason that we can merge these two layers is that under the FIFO method, these goods will be the first ones sold in the next year.

When they become part of the goods sold, the cost becomes part of a large pool in which the identity of the layers is not important.

Although a number of goods physically move on a FIFO basis, this is not a necessary criterion for its use.

For example, think of a large barrel of nails in a hardware store. As additional nails are added to the barrel, they are placed on top of the older nails, and when the nails are sold, the top nails are sold first.

In this situation, the nails move in a last-in, first-out pattern. Nonetheless, the management of the hardware store is free to choose the FIFO method of pricing its inventories.

Last In, First Out (LIFO)

Using the previous data from Cerf Company, the cost of the ending inventory under LIFO is $2,410 and the cost of goods sold is $8,030. These figures are determined as follows:

As the above illustration indicates, the 600 units in the ending inventory are assumed to consist of:

As in the previous example, we could directly calculate the cost of the goods sold of $8,030 instead of deriving it by subtracting the ending inventory of $2,410 from the goods available for sale of $10,440.

When the LIFO method is used, it is important to maintain separate layers of costs of ending inventory. Therefore, in our illustration, the beginning inventory for the next period is carried forward in two layers of 500 units at $4.00 and 100 units at $4.10.

That is to say, inventory decreases in the order that it was originally added, and because the 24 January layer was added last, it is considered to be sold first under the LIFO method.

This $4.35 cost per unit is applied to both the ending inventory and the goods available for sale and is as follows:

In 2020, the beginning inventory—consisting of 600 units at a total cost of $2,610—is included in the calculation of the weighted average unit cost of goods available for sale.

In some situations, it is practical to determine the specific acquisition cost of the items remaining in the ending inventory.

For example, an automobile dealer may hold records of the exact cost of every car sold and every car remaining in the inventory at the end of the year. Other examples of such firms are furniture companies, antique stores, and coin and stamp dealers.

Depending on the costs and benefits, other firms might want to maintain similar records.

To illustrate this method, assume that the Cerf Company is able to determine that the 600 items in the ending inventory are from the specific purchases listed below.

For example, assume that a firm produces only one type of item and that all items are identical (i.e., fungible). Wheat and other commodities are examples of fungible goods.

Buyers of such products are indifferent as to which specific item or lot they buy, and so the firm’s management is free to the specific lot(s) it desires.

As a case in point, the buyer of 10 ounces of gold does not care which lot the gold comes from, as long as all the gold is of the same quality. Thus, the firm’s management can sell the gold from any lot it chooses.

To demonstrate this point, assume that the management of the Cerf Company wants to maximize its income for the current year. In this situation, the firm sells those goods with the lowest acquisition costs (that is, the items purchased at $4.00 and $4.10).

Next year, if management decides to minimize its income, it will sell those products with the highest acquisition prices.

Each year, management could make such decisions without having to maintain a consistent pattern from year to year. Therefore, it has some ability to manipulate the firm’s income.

Learn From the Experts

We hope you found this article helpful. Please let us know how else we can assist. Connect to a financial advisor in Westchester County, NY or check out the list of areas we serve by viewing our financial advisor page.

What are cost flow assumptions?

How do companies choose a cost flow assumption?

There is no right or wrong answer when it comes to choosing a cost flow assumption. The key is to be consistent in the methodology used from period to period. Many companies will use different assumptions at different times, depending on which one results in the most favorable financial position. For example, a company might choose to use the LIFO assumption during periods of inflation, when prices are rising. This results in a lower reported COGS, which can boost profitability.

What are the implications of changing cost flow assumptions?

Changing cost flow assumptions can have a significant impact on a company's Financial Statements. It is important to consult with a qualified accountant or tax advisor to understand the implications of changing assumptions. Depending on which assumption is used, a company's reported income, assets, and liabilities can be significantly affected.

Are there any tax implications of using different cost flow assumptions?

What are some common mistakes companies make when it comes to cost flow assumptions?

Some common mistakes companies make when it comes to cost flow assumptions include: -Not being consistent in the methodology used from period to period -Not consulting with a qualified accountant or tax advisor to understand the implications of changing assumptions -Failing to use different assumptions at different times, depending on which one results in the most favorable financial position.