Three methods of preparing a cash budget are outlined below:

Here, cash is received from cash sales, receipts from debtors, the sale of fixed assets and investments, and the issue of shares and debentures. Both capital and revenue receipts are forecasted.

The cash is applied for wage payment, salaries, and overheads, and capital and revenue expenditure are forecasted. It is noteworthy that outstanding payments and accrued incomes are not recorded under this method.

Prepare a cash budget for the months of May, June, and July 2019 based on the following information.

The first piece of information is an income and expenditure forecast, which is shown below.

The remaining information for this example is given below: 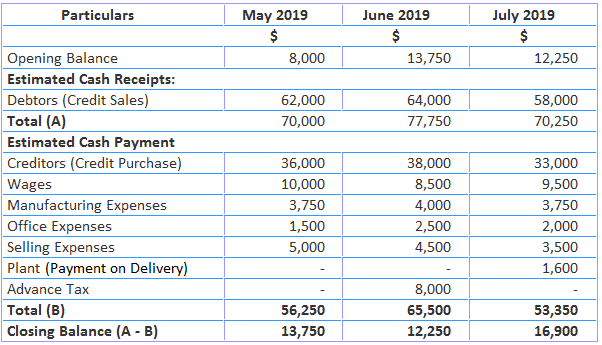 Under this method, net profit is adjusted by adding items of non-fund expenses and deducting non-fund incomes. This method is used to forecast long-term cash requirements.

Here, the cash forecast is made similar to a fund flow statement. Profit is added by non-fund expenses and non-fund incomes are deducted.

The following is the Balance Sheet of AK Trading Co.: 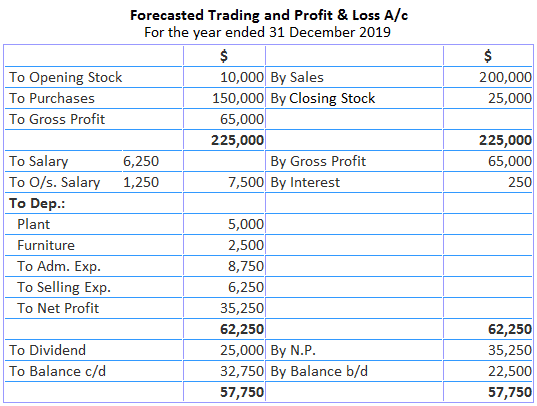 The following is additional information for the year 2019: 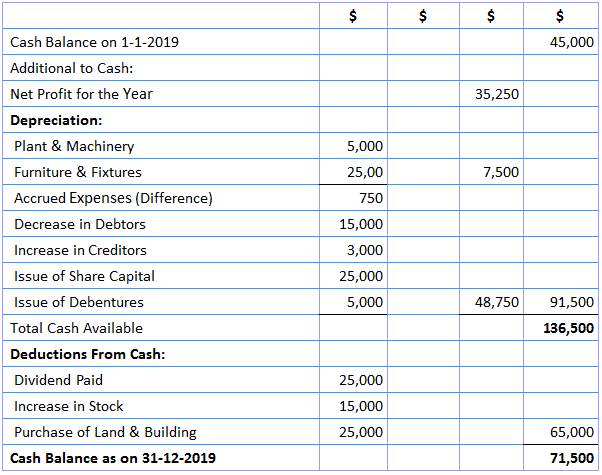 Under this method, at the end of the budget period, a balance sheet forecast is prepared in which assets and liabilities are also shown. The difference on both sides of the balance sheet represents the overdraft or cash balance, depending on the case.

To sustain the increase in activity, it is proposed that the stock level be increased by 100% by the end of the year. The machinery to be purchased during the year will also be worth $6,000.

The estimated profit for the year is $21,000 after charging $12,000 depreciation and 50% profit for taxation. Advance income tax is estimated at $18,000. Trade creditors are likely to be doubled.

A 5% dividend is to be paid and provision for the dividend for next year is to be made. Debtors are estimated to be outstanding for 2 months. The sales budget shows sales of $450,000.

Required: Make an estimate of the company’s cash position by budgeted cash balance sheet as on 31 December 2019. 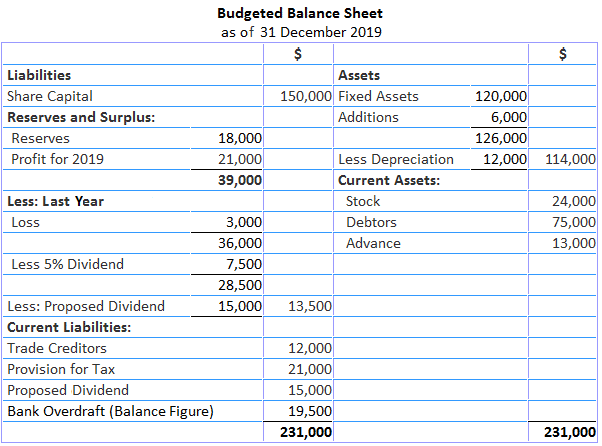 What is a cash budget?

A cash budget essentially estimates the company's expected balance in its bank account and also keeps track of its outstanding debts. It outlines the timing of collection and payment for each transaction over a specific period with detailed listings of receivables, loans and so on. A cash budget assists management in keeping track of their capital expenses, taxation, current operations and other related expenses.

What are the types of cash budgets?

There are two types of cash budgeting models that can be used for a business - fund flow statements and adjusted Profit and Loss Statements. The basic difference between these models is that under an 'adjusted p&l' model, items including Depreciation, goodwill written off, preliminary expenses written off and loss from sale of Fixed Assets are added while items such as dividends received, interest on Debentures, income from properties and increase in current assets are deducted.

What is a cash forecast?

A cash forecast is a projection of the financial position of a business at some point in the future. It is essentially a statement of how much money the company can expect to have in its bank account at a particular time in the future, and whether that will be enough to meet all financial obligations as they fall due. The cash budget forecast model calculates how much cash is expected at regular intervals such as daily, weekly or monthly over a given period of time.

What is a cash forecast model?

A cash forecast model is used to estimate the amount of money that a company will have in its bank account at some point in the future based on current and expected Accounts Receivable, accounts payable and inventory levels. The cash budget forecast helps businesses make informed decisions by projecting trends, predicting future problems and seizing growth opportunities. The model can be used to increase sales or reduce expenses in order to generate greater amounts of cash on a regular basis.

What is a cash flow forecast?

A Cash Flow forecast takes into account not just flows related to receipt and payment but also the timing of each transaction over a particular period of time. The model also provides an analysis of the company's assets and liabilities such as inventory levels, Accounts Receivable and so on. Through this Cash Flow forecast, businesses can determine necessary steps to ensure solvency over time such as adjusting prices or bringing in new investment.