In annuity method of assets depreciation, it is supposed that the money invested in the purchase of the asset earns interest at a fixed rate which is debited to the asset account and according to the annuity table, a certain fixed amount of depreciation is charged everywhere for the estimated useful life of the asset.

1. Use of Interest. Unlike the traditional methods of providing depreciation annuity method takes into account interest on capital invested in the asset.
2. Exact and Suitable Method. It is regarded as the most exact and precise from the point of view of calculations.
3. Scientific Method. The method is most scientific as it takes interest consideration.

Demerits of the Annuity Method

1. Too Many Calculation. It requires a number of calculations which are very complicated.
2. Not Suitable for Addition in Between. In case the asset requires frequent additions and extensions the calculations have to be revised quite after further complicating its application and operation.
3. Fixed Amount of Depreciation. Has the tendency to inequalise the charge to profit and loss account in respect of depreciation and repairs put together because the amount of depreciation remains fixed over the period of the life of the asset.

Application of the Annuity Method of Assets Depreciation 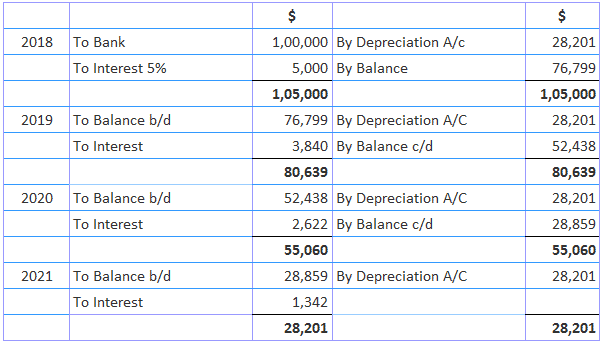