Insurance policies covering losses of property are an integral part of risk management for almost all companies. Some understanding of the basic features of insurance is thus essential in accounting education.

This article focuses on the effect of minimum coverage clauses in casualty insurance.

Generally, policies insuring against losses caused by such things as fire, theft, vandalism, and storms carry a minimum coverage requirement, such that the insured must obtain an adequate level of insurance or share in the loss with the insurance company.

These requirements are known as coinsurance clauses.

If the insured company acquires sufficient coverage of its assets, the insurance company will pay the smaller the actual loss or the policy’s face value. It is only logical that there is no payment in excess of the loss or the coverage paid for by the insured.

If $60,000 damage is incurred and the claim paid, the following journal entry would be recorded:

If $110,000 damage is incurred and the maximum amount paid, this entry would be recorded:

If a depreciated asset is damaged and cash is received in excess of its book value, the firm would report a gain from the fire.

The amount of minimum coverage is determined by applying a coinsurance rate to the full value of the covered property.

Thus, inventory costing $110,000 that is covered by a 90% coinsurance policy must be protected with at least $99,000 of insurance; otherwise, any partial losses will not be fully paid.

The adjusted loss amount is arrived at by multiplying the actual loss by the ratio of the actual coverage divided by the minimum coverage.

Thus, for example, if the actual coverage is only 70% of the minimum, an adjusted loss equal to 70% of the actual loss is compared with the face value of the policy in order to determine the amount of the settlement.

This example presents a flowchart showing how to compute the proceeds gained from insurance settlements.

A. Computing the insurance proceeds for a casualty loss 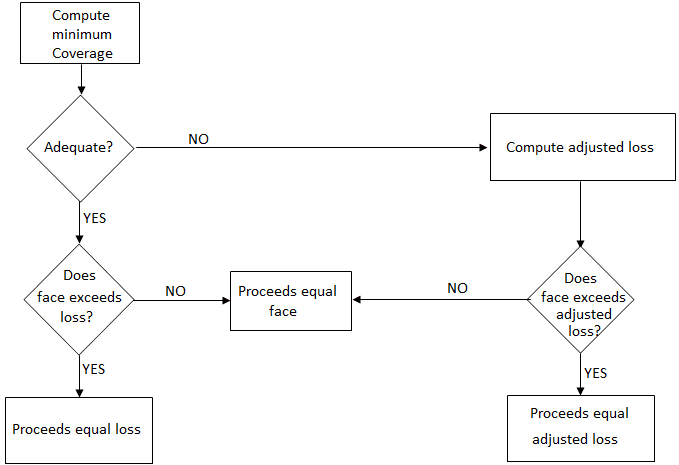 B. Computation of insurance proceeds for a $100,000 casualty loss

The table below shows five examples demonstrating how the procedures work. A uniform 90% minimum (coinsurance) rate and an actual loss of $100,000 are assumed. 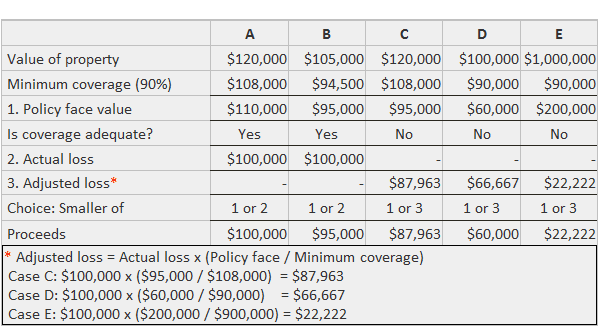 If more than one policy is used to cover the same property, a loss (calculated as shown above) is shared by the insurance companies in the relative proportion of policy face values.

For example, assume that $110,000 of coverage in Case A of the above example is carried with three insurance companies as follows:

If the value of the property at the date of the loss was larger, such that $110,000 was not sufficient to meet the coinsurance requirements, the amount of the loss to be paid would be computed according to the method described earlier (see Example 2).

However, the percentages payable by the separate policies would not be affected. Policy 1 would still pay 40% of the adjusted loss, Policy 2 would pay 50%, and Policy 3 would pay 10%.

Assets are the resources used in the normal operations of a business.

What are casual losses?

A casual loss is one that can be expected to occur frequently in the normal operation of the business.

What is the purpose of insurance?

The purpose of insurance is to protect against loss and reduce financial risk.

What is the difference between assets and casual losses?

Assets are resources used in the normal operations of a business. Casual losses include property damage and injuries to third parties in which liability may be uncertain and difficult to assess.

What does it mean when a loss is not covered by insurance?

A loss that is not covered by insurance is an unexpected event that results in the withdrawal of assets or future earnings.