Depreciation and Changes in Estimates and Method

Due to the estimates and judgments involved when calculating depreciation (as well as amortization and depletion), it is inevitable that facts in subsequent years will show that some of the original projections and assumptions were incorrect.

If the originally selected service life of an asset is sufficiently incorrect that future years’ reported income will be materially misstated, GAAP call for the firm to account for the correction as a change in estimate.

To avoid manipulations, GAAP call for the book value (adjusted for salvage) remaining at the date of the change to be spread over the revised estimated life of the asset.

Suppose that an asset was purchased on 4 January 20×1 and was depreciated on a straight-line basis as follows:

The following example shows the annual depreciation charges over the asset’s four-year life.

Annual depreciation expense when life is shortened to four years beginning with 20×3: 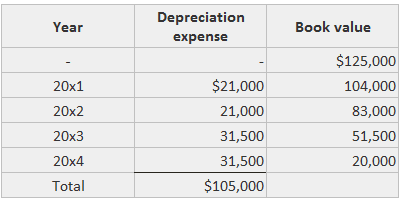 The below example shows the amounts that would have been recorded if the life was extended from 20×3 until the end of 20×7.

The revised annual charge ($12,600) is found by dividing the number of years in the new life (five years) into the remaining depreciable basis ($63,000).
Annual depreciation expense when life is extended to seven years beginning with 20×3: 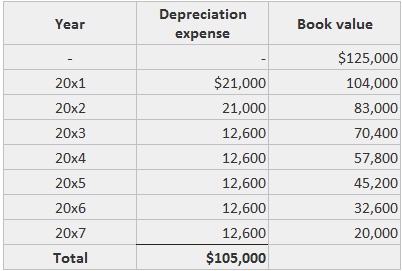 If a declining balance method was being used, a new rate would be computed for the remaining life by multiplying the new straight-line rate by the appropriate multiplier (1.25, 1.50, or 2.00).

If the sum of the years’ digits was being applied, a new denominator would be computed as the sum of the digits from one to the number of years in the revised life. The numerator would start again at that same number.

If the original estimated salvage value is sufficiently incorrect such that it causes financial statements to be materially misleading, the firm should prepare a prospectively revised depreciation schedule.

In the new schedule, the new salvage value should be deducted from the book value of the asset.

Suppose that the salvage value of the asset described above is reduced in 20×3. The following results would be achieved:

Thus, the charge for each of the remaining three years would be $25,000.

If the firm’s management decides to change its choice of depreciation method, the change is considered to be more substantive and the accounting procedure is more complex.

A note such as this one may be used to disclose the change:

This approach is acceptable even though it violates consistency in reporting. To be more thorough, many companies introduce a comprehensive change wherein depreciation on old assets is computed under the new method.

What is the effect of changing the estimated useful life of an asset?

How is the estimated residual value determined?

Depreciation methods that allow for a residual value generally estimate this amount at the end of the useful life. The amount can be based on historical experience, estimates provided by outside experts, or other means.

Once you make a Depreciation decision, that assumption is locked in unless you go through the process of changing it. Changing estimates related to residual value or useful life are causes for changing Depreciation practices. Other changes can be made as well.

What are some examples of other appropriate changes?

A change in business conditions might call for a change in assumptions about expected lives or future selling prices, for example. If a business is in doubt about the accuracy of its assumptions, it might record a loss from a change in accounting estimate.

Why would an accounting firm be interested in changes made by company management?

In addition to providing tax advisory services, accounting firms often provide significant non-tax functions to their clients. The accounting firm may lead the process of managing Depreciation, including setting the assumptions that go into calculating future Depreciation charges.