The effort needed to calculate depreciation for a large group of assets can usually be reduced without sacrificing accuracy. This is achieved by aggregating the assets and treating them as if they are a single asset.

The group approach to aggregation, known as composite depreciation, is applied to collections of assets that share similar service lives and other attributes.

For example, machinery, furniture, or fleets of vehicles are often depreciated as groups.

While each item in a group is unlikely to have exactly the same service life, an item should be excluded if its service life is materially different.

This point is critical to the group approach because it involves applying a single straight-line rate to the average total cost of the group for the period.

The composite depreciation approach produces results identical to those obtained from a more detailed calculation, as long as the assets have identical lives and as long as the group remains intact.

The problem of partial years’ depreciation caused by the acquisition and retirement of assets is solved by using the average balance of the asset account.

The average may be computed on an annual, quarterly, or monthly basis according to the rate of change the group experienced in the year.

Additions are recorded by debiting the group asset account for cost. Retirements are recorded under the assumption that the book value of the items exactly equals the salvage proceeds; therefore, a gain or loss will not be recognized on retirement.

This practice will not produce material distortions if the unrecorded gains tend to counteract the losses.

The journal entry to record retirement credits the group account for the item’s original cost debits cash for the proceeds and debits accumulated depreciation for the difference.

This example shows the property records for the office equipment group at Sample Company. In the real world, the situation could include literally thousands of items. 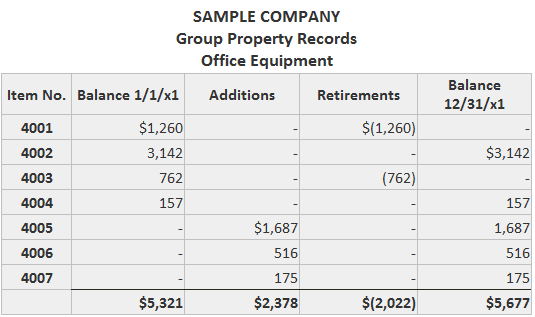 The additions during 20×1 are recorded as follows:

The annual depreciation expense is calculated by dividing the average group cost by the number of years in the typical life of the members: 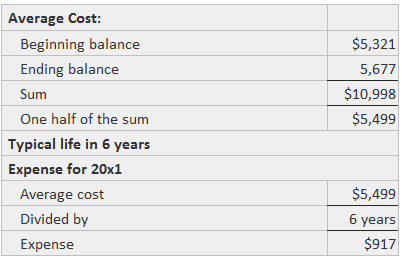 The following journal entry is made to record the depreciation expense:

The composite approach to aggregation works virtually the same as the group method except that the aggregated items are components of a physically unified operating asset, such as a building.

Consequently, the individual members of the composite asset may have diverse expected lives.

As a result of this condition, a composite system is more likely than a group system to produce an annual depreciation charge that varies materially from the amount that would be computed if each component were to be depreciated separately.

Due to this potential, composite systems generally are not encountered as frequently as group systems. For collections of relatively low-valued assets with short service lives, retirement and replacement systems are occasionally encountered in practice.

Under both approaches, the aggregate asset account is debited at the time that the initial collection is acquired.

No other entries are made to Depreciation Expense, with the consequence that one or more periods can pass without any expense being recognized if no retirements occur.

For example, the following entry records the acquisition of 1,000 hand calculators at $150 each:

When 100 new calculators are acquired later at $120 each, another journal entry would be made, as shown below.

When 100 old calculators are retired and $100 in cash is received as a result, the following entry is made:

The initial acquisition entry is the same as shown above for the retirement method; however, the amount paid for the new (or replacement) assets is debited to Depreciation Expense instead of the asset account.

When items are retired, the amount of the proceeds is credited to Depreciation Expense instead of the asset account. For the acquisition of 100 new calculators, this entry would be made:

The retirement of the old calculators would be recorded as:

The asset account balance remains the same, therefore, throughout the life of the aggregated collection of assets.

The practices involved in retirement and replacement systems are likely to produce aggregate expense measurements that differ materially from individual calculations.

Therefore, they are acceptable only in situations where even a large distortion in the amount of depreciation expense will not have a material effect on reported income.

They are occasionally encountered in regulated industries such as utilities and railroads, but only as exceptions to otherwise generally accepted accounting practice.

What is the composite method of depreciation?

The composite method of Depreciation is a mathematical approach to disposting the cost of an aggregate asset such as land, building, and plant.

What are the types of depreciation methods?

What are the advantages of the composite method of depreciation?

Under this method, total Depreciation in one year is 100%. One can claim full deduction under the head “Depreciation” in that particular year. Thus, tax liability is reduced to a great extent.

What are the disadvantages of the composite method of depreciation?

The main disadvantage with this method is that it provides lesser flexibility compared to other methods. You have to depreciate whole plant or machinery at once i.e., after allocating proportionately for each item present in the pool so there is no scope left for deducting tax by way of separate allowances on individual items constituting aggregate asset pool

What is the fractional year method?

It is used for computing Depreciation on depreciable asset if the life of an asset does not coincide with a year.