What Is the Declining Balance Method of Assets Depreciation? – Definition

Under the declining balance method, depreciation is charged on the book value of the asset, and the amount of depreciation goes on decreasing every year.
or
An accelerated method of assets depreciation in which the asset’s book value at the beginning of each ledger is multiplied by a constant percentage.

As alternative systematic allocation schemes, several declining balance methods of computing depreciation expenses have been developed. They determine the annual charge by multiplying a percentage rate by the book value of the asset (not the depreciable basis) at the beginning of the year.  Because the book value declines as the asset gets older and the rate stays constant, the depreciation charge gets smaller each year.
Financial accounting applications of declining balance are often linked to income tax regulations which allow the taxpayer to compute the annual rate by applying a percentage multiplier to the straight-line rate. According to the type of property, the multiplier assumes a value such as 1.25, 1.50, or 2.00 (when the multiplier is 2.00, the method is known as double declining). The applied rates for several situations are shown below:

Under the declining-balance methods, the asset’s salvage value is used as the minimum book value; the total lifetime depreciation is thus the same as under the other methods. The arbitrary rates used under the tax regulations often result in assigning depreciation to more or fewer years than the service life.

Under the declining-balance method, yearly depreciation is calculated by applying a fixed percentage rate to an asset’s remaining book value at the beginning of each year. Because twice the straight-line rate is generally used, this method is often referred to as double-declining balance depreciation.
For example, the equipment has a five-year life. This results in an annual straight-line percentage rate of 20% (1 / 5 = 20%). The double-declining-balance rate is 40% (2 x 20%). This rate is applied to the asset’s remaining book value at the beginning of each year. When applying the double-declining-balance method, the asset’s residual value initially is not subtracted from the asset’s acquisition cost to arrive at a depreciable cost, as it is when applying the straight-line method, the unit-of-production method, and the sum-of-the-years-digits method.
Residual value is considered only in the last year of the asset’s life, when that year’s depreciation is limited to the amount that will reduce the asset’s book value to its residual value. These points are illustrated in the following schedule, which computes yearly depreciation for the equipment:

Advantages of the Declining Balance Method

(i) No Zero Value. The value of the asset cannot be brought down to zero under his method.
(ii) Rate Determination is not easy. The determination of a suitable rate of depreciation is also different under this method as compared to the Fixed Instalment method.

The following examples show the application of double and 150 percent declining-balance methods to calculate the asset’s depreciation:
Asset’s details are as below: 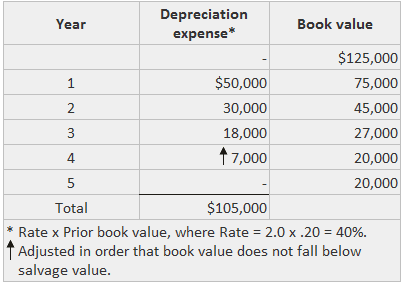 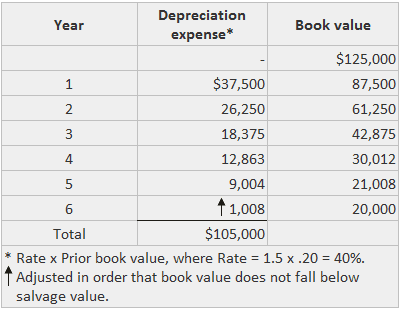