What Is the Straight-Line Depreciation Method?

Explanation of the Straight-Line Method of Depreciation

To explain the straight-line method of depreciation, let’s assume the following data:

Using the above data, yearly straight-line depreciation is $7,200, calculated as follows:
(Cost – salvage value) / useful life = ($40,000 – $4,000) / 5 = $7,200
When the straight-line method is used, the depreciable cost of the asset is spread evenly over its life, in this case at a uniform rate of 20% (1 / 5 = 20%). Therefore, depreciation expense is the same each year, and by the end of the fifth year, the asset’s book value has been reduced to its estimated residual value of $4,000. Even if the equipment is still being used past the fifth year, it is left at its book value of $4,000. These points are summarized in the following schedule:

Below example shows the results of applying the method to this asset: 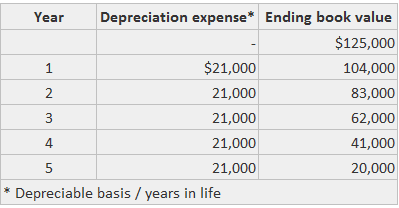