When an already-committed error is offset by another error (or set of errors), the latter error is known as a compensating error. Compensating errors occur when errors in equal amount but opposite in sense cancel each other.

When errors have been compensated, the trial balance is in agreement. The result is that locating such errors becomes difficult.

Compensating errors pose greater problems to a business compared to other types of errors. This is because they are not single errors but are combinations of more than one error.

For this reason, to correct compensating errors, it is necessary to identify not one error but more than one error (or a number of errors).

It is also possible for two or more errors of this kind to be made in the books, which cancel out each other’s effects.

For example, if both the sales book and purchases book are overcast by $1,000, the net effect in the ledger will be nil. This is because the over-debit in the purchases account is nullified by the over-credit in the sales account.

To correct compensating errors, each error must be corrected individually.

The trial balance extracted on 31 December 2017 from the books of a wholesaler does not agree, and so the difference was allocated to a suspense account.

Required: Rectify the entries in the journal and suspense account, ensuring that they are duly balanced. 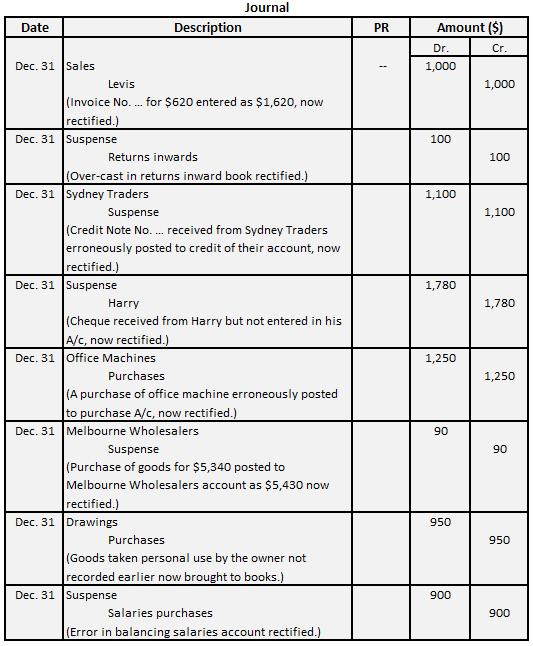 What is compensating error?

Compensating errors occur when errors in equal amount but opposite in sense cancel each other.

How do you identify compensation errors?

A good sold to company a amounted to 4000/- was posted to the debit side of company a’s account with 400 only. The error will reduce the debit total of the trial balance by 3600. Suppose, at the same time receipt of 4000/- from company b was wrongly credited to company b’s account as 400/-. In this case, the amount of 3600/- is less credited. Such an error will reduce 3600 from the credit side of the trial balance.

How many errors are committed in compensating errors?

Two or more. If there are 2 or more errors made in a way that the over-all effect of these error on the credit and debit is nil, these errors are called compensating errors .

What is the difference between cumulative error and compensating error?

The term "cumulative error" refers to any error that happens in the same direction during the chaining operation. With the chaining process, this type of error accumulates.

How do compensating errors occur?

Compensating errors occur when errors in equal amounts but opposite in effect are made in different accounts.