For example, a transaction may be entered in the subsidiary book at the wrong amount (i.e., error in original entry) and later debited or credited to the wrong account in the ledger (i.e., error of commission).

As another example, an item of capital expenditure may be treated as an item of revenue expenditure and, at the same time, the entries may be made in the ledger on the wrong sides of the accounts involved (i.e., complete reversal of entries).

The above errors, as well as other errors like these, should be treated as two errors. As such, two separate rectification entries should be passed to rectify them.

These are obviously two errors. First, there is an error in the original entry when an invoice for $1,450 was recorded in the sales book at $1,400. The second error occurred when Tom & Company’s account was debited instead of Mr. Tom’s account. 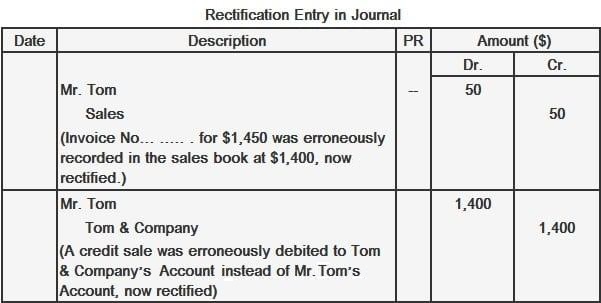 As a result of the above two entries, the total credit in the sales account increases from $1,400 to $1,450 (i.e., the correct amount of the invoice).

At the same time, the debit entry of $1,400 is removed from Tom & Company’s account, while Mr. Tom’s account is debited with a total of $1,450, which is the correct amount of the invoice.

What is a partial reversal of entries?

A partial reversal occurs when the original entry in the subsidiary book is correct, but a later ledger entry is wrong (i.E., On the wrong side of account). For example, an invoice for $1,000 was issued to mr. Tom and then later debited to the wrong account.

What is a complete reversal of entries?

When an item of revenue expenditure is treated as Capital Expenditure and vice versa, it is one type of complete reversal of entries.

How can a transaction be entered at incorrect amounts in a subsidiary book?

A transaction may be recorded at incorrect amounts on the wrong side of an account due to mistake or clerical error. For example, a sale for $3,000 is made and then it is recorded on the debit side of the sales account as $2,000.

What is an error in an original entry?

What are examples of errors not affecting Trial Balance?

Errors not affecting Trial Balance can take several forms. For example, a transaction may be entered at incorrect amounts in the subsidiary book and then later debited or credited to the wrong accounts in the ledger due to mistake (i.E., Wrong side of account). Another example is an item of Capital Expenditure being treated as revenue expenditure and vice versa.