Calls in Arrears and Calls in Advance

If any amount that is called in respect of a share is not paid before or on the date fixed for payment, such an amount is known as calls in arrears.

Companies can charge interest on all such calls in arrears for the period that the amount remains unpaid. The rate used is 5% p.a. The total of calls in arrears is shown in the balance sheet as a deduction from the called-up capital.

The money received by a company in excess of what has been called up is known as calls in advance.

A company, if authorized by its articles, may accept calls in advance from shareholders. If such an amount, which has not been called, is received, the amount should be credited to a separate account known as the calls in advance account.

However, the amount that is not called should not be credited to the capital account. A company may pay interest on such amounts received in advance at the rate of 6% p.a. No dividend is payable on this amount.

The amount that is received will be adjusted toward the payment of calls as and when they become due.

3,000 shares were issued for subscription and payable as to $12.50 on application, $12.50 on the allotment, and $25 three months after allotment, with the balance to be called up as and when required.

All money up to allotment was duly received, but regarding the call of $25, a shareholder holding 100 shares did not pay the amount due. Another shareholder who was allotted 150 shares paid the entire amount of the shares.

Show the journal entries needed to record the above transactions, including cash, and show how these appear in the balance sheet. 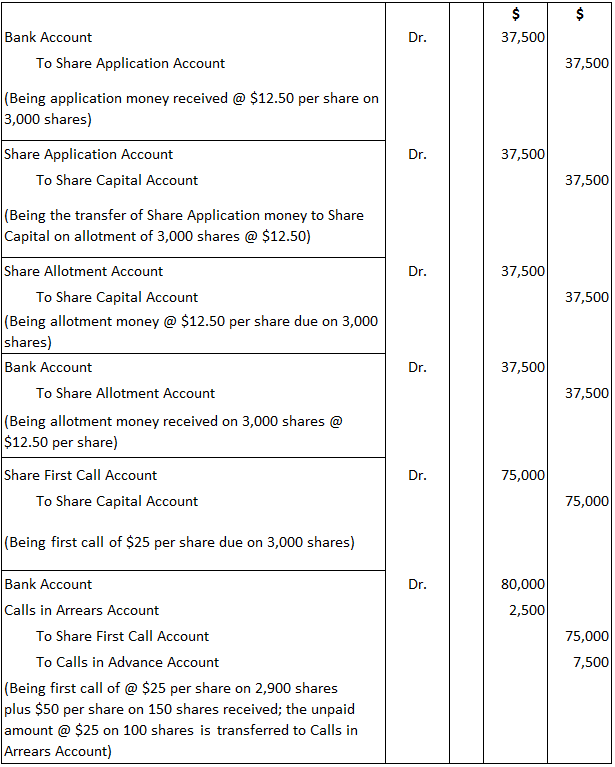 The directors decided to charge and allow interest, as the case may be, on calls in advance and calls in arrears.

Give journal entries in the company’s books.

What are calls in arrears?

Calls in arrears are money that is called up but has not been paid.

What are calls in advance?

Calls in advance are money that is called over and above what has been called for.

What happens if a call isn't paid?

If a call isn't paid then the company can charge interest on the amount of unpaid money.

Why are calls in arrears and calls in advance important?

Calls in arrears and advances are important because they give the company more flexibility to collect funds that may be needed. This can also help manage Cash Flow within a business.

How do companies record this?

Companies record these items with the journal entry of debit to the amount due, then credit cash or account receivable. If interest is being charged then a separate account called "interest in arrears" or "interest in advance" should be debited and credit to the capital accounts.