What is a Corporation? – Definition

A corporation is a separate body, authorized by law, owned by one or more persons and having its own rights, privileges, and obligations distinct from those of its owner(s).
In effect, under the Constitution, a corporation is a separate legal entity with a continuous life that has rights and obligations similar to those of an individual in the United States. This means that a corporation can sue or be sued and does not go out of existence with the death of an owner in ownership.

A corporation has certain characteristics that give it a number of advantages over other forms of business organizations. These advantages include limited liability for the shareholders, transferability of ownership, ease of capital formation and professional management.

Limited Liability of the Shareholders

A corporation is responsible for its own obligation. Its creditors can look only to the assets of the corporation to satisfy their claims. The owners’ total liability generally is limited to the amount they invested in the corporation. Thus, if you invested $5,000 in a corporation, your liability would be limited to that Investment regardless of the debts the corporation may eventually incur. However, in many smaller corporations owned by families or a few individuals, the shareholders often are required to guarantee corporate loans from banks and other creditors.

Ownership in a corporation is evidenced by a share of stock. These shares generally are transferable without any restrictions. Large exchanges such as the New York and the American stock exchanges, as well as regional exchanges, exist to facilitate the exchange of stock between individuals. Once the stock of a corporation is issued, the corporation is not affected by subsequent stock transactions among individual shareholders, other than the fact that its list of shareholders will change.

Limited liability and transferability of ownership make it relatively easier for a corporation to raise capital than for sole proprietorships and partnerships. Many individuals can invest small amounts of capital that, in total, will meet the large capital needs of a major corporation. It is attractive to individuals to invest in corporations because they know the amount of their total risk and are usually able to liquidate their investment when they desire.

In a large publicly held corporation the owners generally have no direct management control. They give this control to the corporation president and other senior officers. This separation between ownership and control allows corporations to attract top-level professional management. In most sole proprietorships and partnerships, the owner is also the manager. Consequently, an owner who has considerable engineering skills may not have the necessary management skills to operate a business successfully.

Some of the same corporate characteristics that provide certain advantages to incorporating may also result in some disadvantages. These disadvantages are especially relevant to smaller businesses.

Corporations must be chartered by a state and thus must comply with various state as well as federal regulations. Several reports and documents must be filed with state and federal agencies. For smaller companies, the cost of complying with these regulations may outweigh the other benefits of the corporate form of business organization. Although government regulation applies to all forms of business enterprise, generally it is not as great a factor for sole proprietorships and partnerships.

For smaller companies, the limited liability feature of a corporation may be a disadvantage in raising capital. Because of this feature, creditors have claims against only the assets of a corporation. Thus, if a corporation defaults, the creditors have no recourse against the owners. As a result, loans from bankers and other creditors are often limited to the amount of security offered by the corporation, or in other cases, the shareholders may have to sign an agreement pledging their own assets as security.
In other situations, the owners of a small corporation may raise’capital with the help of venture capitalists. A venture capitalist is an individual or group of who provide capital to growing and emerging firms, In return for their capital, these individuals usually demand an equity position in the firm. Thus, the original owners may have to give up their control of the corporation as the price of obtaining capital.

Formation and Organization of a Corporation

The procedures to form a corporation and subsequently to conduct business are a function of state law, and as you might expect, all states have somewhat different laws. For example, historically it has been easier to incorporate in some states such as Delaware than in other states such as California. To a large extent, this has been because of the regulatory environment in California. The following discussion is thus based on the general procedures found in most states.

The first step in forming a corporation is for at least three individuals, generally the corporate president, vice-president, and secretary-treasurer, to file an application with the appropriate state official, often called the Secretary of State. Among the items included in the application are the articles of incorporation which list:

Once the articles of incorporation have been approved by the appropriate state official, they are often referred to as the corporate charter.

During the organization process, a corporation incurs certain costs. These include filing and incorporation fees to the state, attorney’s fees, promotion fees, printing and engraving fees, and similar items. These costs all are necessary to get the corporation started. Because they are considered to have future benefit, they are capitalized and are referred to as organization costs. These organization costs are usually listed in the other asset section of the balance sheet.
Although these costs benefit the corporation over its entire life (considered to be indefinite under the going-concern assumption), they are normally written off over a five-year period of time. This is because the income tax laws allow these costs to be written off over a minimum of five years. Although accountants do not necessarily follow tax laws in setting accounting principles, they do so in this case because organization costs are usually not material.

Immediately after the corporation’s charter is issued, the shareholders must organize the firm in order to conduct future business. A board of directors must be elected who in turn appoints the new officers of the corporation. Corporate bylaws are drafted that establish rules of order for the operation of the new corporation.

The below example, which presents a typical corporate organization chart, shows the relationship among the stockholders, the board of directors, and senior corporate management. 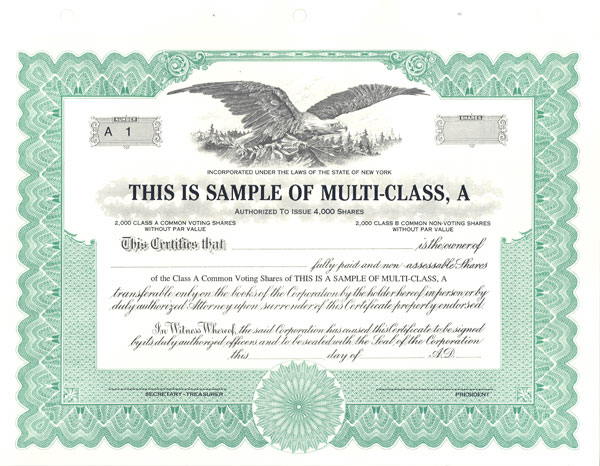 In large corporations, the shareholders do not participate in the day-to-day operation of the business. They do elect the board of directors and vote on important issues at the annual stockholders’ meeting. The board of directors is charged with establishing broad corporate policies and appointing senior corporate management.
However, stockholders do have certain rights, which include:

The Board of Directors and Senior Management