Issue of Shares at Discount

Shares issued at a discount are priced less than the face value. It is lawful for a company to issue shares at a discount if several conditions are met.

The first condition is that the issue of the shares at a discount must be authorized by a resolution passed at the company’s general meeting, and it must be sanctioned by the authority.

Second, the above-mentioned resolution must specify the maximum rate of discount (not exceeding 10% or a higher rate fixed by the authority) at which the shares are to be issued.

The third condition is that at the date of issue, not less than one year must have elapsed since the date on which the company was entitled to commence business.

Discount on the issue of shares should not be mixed with the share capital. Instead, it should be debited to a separate account known as a share discount account. It is shown as a separate item on the asset side of the balance sheet.

Accounting Entries for Issue of Shares at Discount

If shares are issued to the company’s directors or underwriters at a discount, the accounting entries should be made as follows:

If the shares are issued at a discount to the general public, then the following entries should be made:

If shares are issued at a discount to the promoters in consideration of their services, the entries should look like the following:

Required: Record the journal entries and prepare the balance sheet. 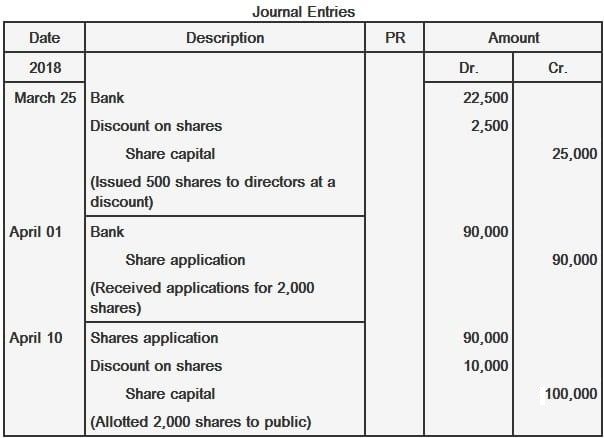 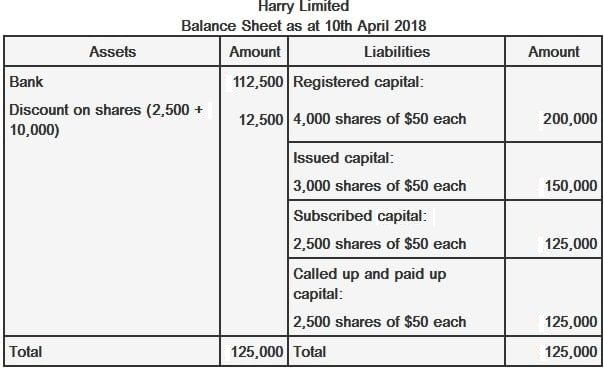 What is meant by the issue of shares at discount?

When a company issues shares of face value more than the par value of the share at a discount, then it is termed as issue of shares at discount.

What are the conditions that need to be met for a company to issue shares at a discount?

What are the benefits of issuing shares at a discount?

One of the main advantages of issuing shares at a discount is that it helps in raising capital for business expansion with minimal sacrifice in the company’s equity.

How are discounts on the issue of shares accounted for?

The discount on the issue of shares should not be mixed with the share capital. Instead, it should be debited to a separate account known as a share discount account. It is shown as a separate item on the asset side of the balance sheet.

The deficits in share capital cannot be treated like discounts on shares. If any deficit still exists, then the company has to carry forward the amount and set it off against the capital whenever profits are made.