The debit columns in a cash receipts journal will always include a cash column and, most likely, a sales discount column. Other debit columns may be used if the firm routinely engages in a particular transaction.

In the example below, the only other debit column is the other accounts column. This column is divided into three parts:

If desired, the area for the name of the account in this column can be replaced with an area for account numbers.

The credit columns in a cash receipts journal will most often include both accounts receivable and sales. Again, other columns can be used depending on the type of routine transactions that the firm engages in.

In our example, the only other credit column featured in the cash receipts journal is for all other accounts. It is set up in the same way that the other column on the debit side is, except that the account title area is replaced by a “Ref.” column. 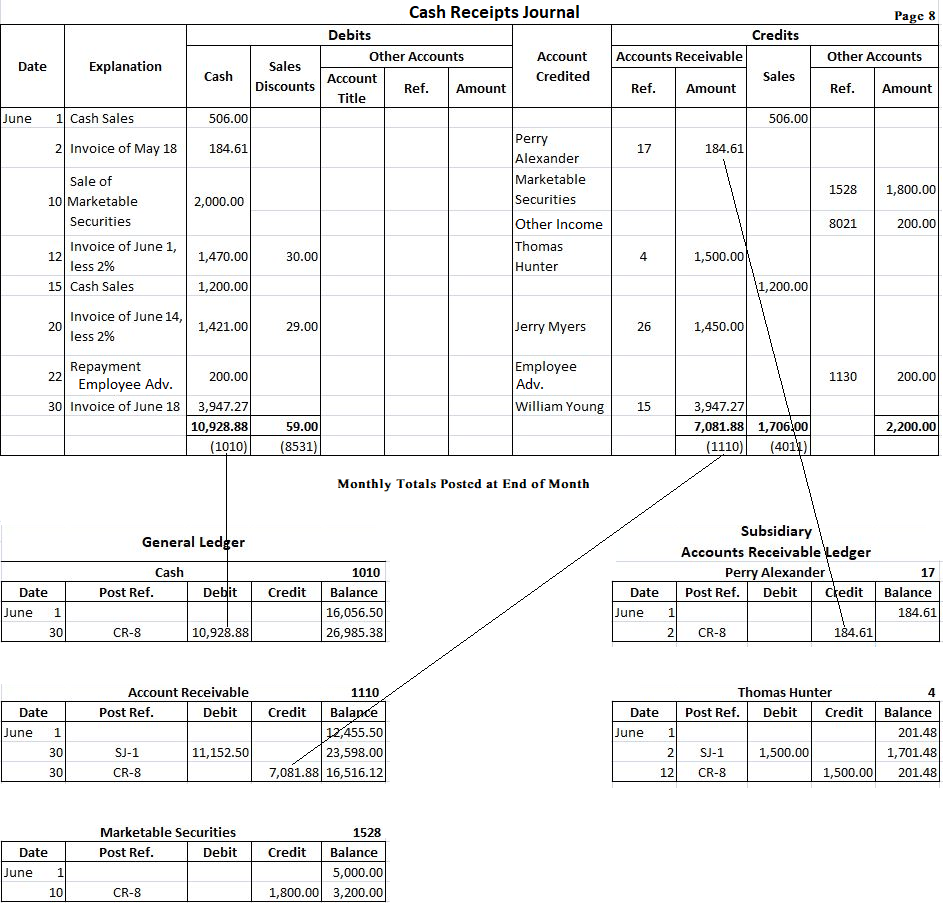 To learn more about how cash receipts journals are used, let’s consider an example.

Assume that, during June, the Fortune Retail Store made the following transactions involving cash receipts:

June 2: Collected from Perry Alexander (account no. 17) $184.61 from the sale made in May. No sales discount allowed

For example, the cash sale on June 1 is recorded in the cash receipts journal by first entering June 1 in the date column. Cash sales are entered in the explanation column. The amount of $506 is then placed in both the cash debit column and the sales credit column.

In this example, it is not necessary to make an entry in the account credited column. This is because the entry in the cash and the sales columns makes it clear that this is a cash sale. Other entries are made in a similar fashion.

Depending on a company’s requirements, different formats are used for a cash receipts journal. To help you understand the recording procedure, a simple format is given below.

An overview of the purpose of each column in the specimen shown above is given as follows:

1. Date column: Used to record the date at which cash is received by the business.

2. Accounts credited column: Used to enter the title of the respective account on which cash is being received.

3. Posting reference column: Used to write the number of the ledger account at the time of posting.

5. Discount column: Used to record the amount of cash discount allowed at the time of receiving cash.

6. Sales column: Used to record the sale of merchandise for cash.

8. Sundry accounts column: Used to record the credits to any account for which there is no special column (e.g., receipt of interest, receipt of cash for the return of merchandise purchased on cash, and so on).

For the year 2016, record the following transactions in a cash receipt journal: 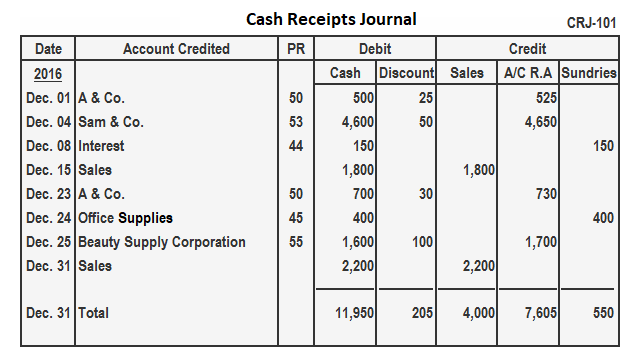 The procedure for posting the cash receipts journal is described below:

This ensures that the individual customers’ accounts are up to date and accurately reflect the balance owed at that date.

At the end of the month, the different columns in the cash receipts journal are totaled. The totals from all the amount columns (other than the other account column) are posted to the appropriate general ledger accounts.

Again, in the general ledger accounts, the post reference “CR-8” is recorded to indicate that these entries came from page 8 of the cash receipts journal.

The amounts in the other accounts column must be posted accurately. Although these amounts are often posted at the end of the month, they could be posted more frequently. As they are posted, the account numbers are placed in the post reference column.

A check is placed under the total of this column as this total is net posted.

Reach Out to the Professionals