Capital stock consists of claims held by owners arising from investments in the firm. A corporation is authorized by the state government to come into existence and issue shares.

Once authorized, the corporation’s shares fall into one of these four categories:

GAAP calls for disclosure of the quantities of shares in each group either in the balance sheet or in a note.

The charters of many corporations allow them to issue more than one class of stock. Holders of the various classes possess different rights.

The possible positive features of preferred stock include:

The possible negative features of preferred stock include:

In many cases, preferred stockholders’ rights more closely resemble those held by creditors rather than owners.

Common stockholders own the residual interest in the firm; that is to say, they fall last in the order of precedence with respect to receiving cash upon the dissolution of the corporation.

The claims of common stockholders are the ones increased by profits or decreased by losses (after considering preferred stock dividends). Occasionally, a corporation may issue different classes of common stock, of which at least one must have voting rights.

The term legal capital is frequently used in statutes related to incorporation in order to identify the minimum amount of owners’ claims that cannot be satisfied through the distribution of assets.

The concept of legal capital was originally established in order to protect creditors from the actions of unscrupulous management, particularly the possibility that liquid assets may be siphoned off, leaving a corporate “shell” that cannot pay its debts.

The quantity of legal capital is either stated in the statute as a given amount (e.g., $1,000 in Washington, D.C.) or as an amount based on the number of shares of stock issued.

The slight protection of legal capital has been substantially replaced by stronger doctrines, as created and enforced by courts. In general, they are based on the fiduciary responsibilities of managers.

Consequently, the amount of legal capital is not a key item for financial accounting disclosure.

The amount recorded in the capital stock account for a particular class of stock depends on whether the shares have a par value. Par value stock has an assigned value per share that is fixed in the corporate charter.

In some states, legal capital may be defined as the aggregate par value of the issued shares. This amount is used in financial accounting to determine the amount recorded in the account for the capital stock claims.

Par value is also meaningful when dividends are expressed as a percentage of par value, as usually occurs for preferred shares.

A very low par value is often established in order to minimize legal capital and to reduce state fees related to chartering and operating the corporation, which is proportional to aggregate par value.

For example, Delaware, a state in which many large companies are incorporated, assesses fees on this basis.

As an alternative to issuing par value stock, many firms issue no-par-value shares. Legal capital for these corporations may be established by the use of a stated value per share that substitutes for par value or by using the total value received upon issuance.

The balance of the capital stock account equals the stated value of the outstanding shares or—if there is no stated value—the total proceeds. The choice among issuing par value, stated value, or true no-par-value shares may be determined by state laws.

For example, if a Delaware corporation issues no-par-value stock, fees are calculated as if the stock has a $100 per share par value.

In addition to the dollar amount recorded in the capital stock account, the balance sheet or notes should provide these facts:

The examples below show excerpts from the balance sheets of Capital Food Industries and General Motors to illustrate these disclosures. 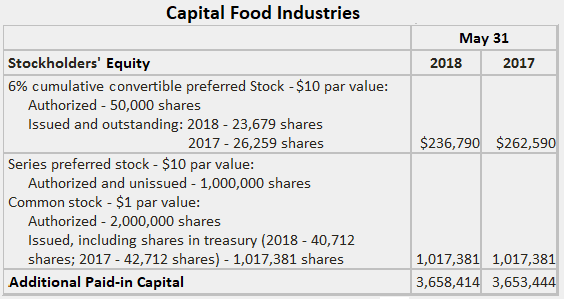 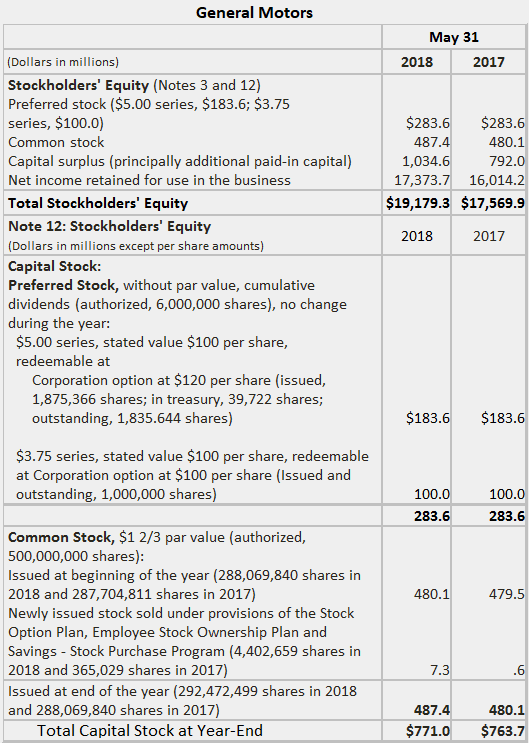 What is a capital stock?

The term capital stock refers to the part of a business that has been funded with money invested in it by owners. The amount of capital stock reflects the initial investment made by those owners, as well as the number of assets that have been generated by those investments.

What are some examples of common stock?

Common stock is considered equivalent to voting rights in the corporation. This suggests that they are entitled to dividends and also have voting rights.

What are the positive features of preferred stock?

What does legal capital mean?

The term legal capital refers to the minimum amount of money that a business must have to be considered legitimate. Many states require businesses to have a certain level of this value before they are able to receive a charter as a legal corporation.

How do we measure capital stock?

The par value of the stock or the stated par value is both options for measuring capital stock. The choice between the two is dictated by each individual state's definition of legal capital.