This article briefly discusses how accounts are classified under both approaches.

Classification of Accounts Under the Traditional (or British) Approach 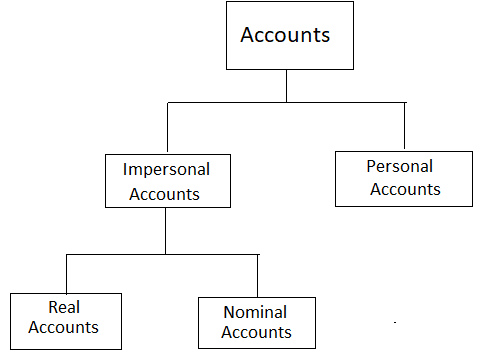 According to the traditional approach, accounts are classified into three types: real accounts, nominal accounts, and personal accounts. Given that it is an old system for classifying accounts, it is used rarely in practice.

Personal accounts are the accounts that are used to record transactions relating to individual persons, firms, companies, or other organizations.

Examples of such accounts include an individual’s accounts (e.g., Mr. X’s account), the accounts held by modern enterprises, and city bank accounts.

Impersonal accounts are those that do not relate to persons. There are two types:

Usually, real accounts are listed in the balance sheet of the business. For this reason, they are sometimes referred to as balance sheet accounts.

Nominal accounts are closed at the end of the accounting period. For the next account period, these accounts start with a zero balance. Nominal accounts typically cover issues such as income, gains, expenses, and losses.

Classification of Accounts Under the Modern (or American) Approach

The modern approach has become a standard for classifying accounts in many developed countries.

The main types of accounts used under this approach are mostly self-explanatory.

Specifically, under the modern approach, accounts are classified into the following five groups:

Consider the list of accounts shown below. Our task is to classify these accounts using both the traditional and modern approaches.

What are the two approaches of accounting?

What are the 3 types of traditional approaches?

What are the 5 types of modern approaches?

Why is classification of accounts important?

Classification of accounts in the ledgers is needed to create the Financial Statements. If the sale and purchase of assets have been properly recorded, that makes it easier to see asset classifications you need to report on the balance sheet.

What is the difference between a personal and an impersonal accounts?