The overall objective of accounting is to provide information to investors and creditors to help them assess the likelihood, amounts, and timing of cash flows to be received from the firm. Accountants maintain that this objective is most likely to be met if the financial statements are presented in accordance with GAAP. However, if it is known that compliance with the usual accounting practice will produce misleading statements, departure can be allowed as long as full disclosure of the practices is provided. One of these departures is the implementation of a quasi-reorganization. The general circumstances that surround a quasi-reorganization encompass one or both of the following conditions:

In this case, the financial statements prepared in accordance with GAAP will not provide a reasonable description of the firm because assets are overstated (future years’ depreciation will be too high) and the deficit makes the firm appear to be unprofitable. For example, a firm may incur losses as it develops new products and distribution channels; however, its stockholders must wait to receive dividends until future profits exceed the deficit, even though the cash is available.
One solution in these cases is a formal reorganization in which the old firm’s assets would be sold to a new corporation whose shares would be distributed to the old stockholders. To avoid the costs of doing these things, a quasi-reorganization may be carried out. Approval may have to be obtained from stockholders, state authorities, and the auditor before the process can be initiated.
At the time that a quasi-reorganization is implemented, these three steps must be accomplished:

When these three steps have been accomplished, the firm has been provided with a “fresh start.”

Below example shows three balance sheets for the Sample Company. The first column lists the account balances developed through compliance with GAAP. The second column shows realistic fair values for the assets and liabilities, as well as what the deficit in Retained Earnings would be from the net write-down of $260,000. The third column shows what the account balances will be after the quasi-reorganization is completed. 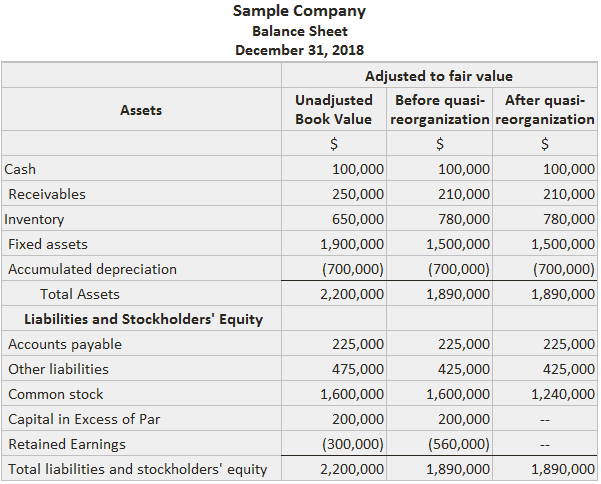 The revaluation of the assets and liabilities is accomplished through this journal entry:

After this entry is posted, the account balances equal the amounts shown in the second column. Notice that inventory could be increased and other liabilities decreased because the larger declines in receivables and fixed assets prevented a net write-up of assets which would have resulted in an increase of the stockholders’ equity.
The deficit in Retained Earnings is now $560,000 and exceeds the balance in the Capital in Excess of Par; consequently, the par value of the stock will have to be changed. The expedient approach is to amend the charter such that the stock has no-par value. This entry would accomplish the closing of the Retained Earnings account and the recapitalization:

After this entry, the account balances will be the same as those shown in the third column of the above example.

Balance sheets or statements of stockholders’ equity prepared after the quasi-reorganization must disclose (1) that it took place, (2) the date of its occurrence, and (3) the size of the deficit that was eliminated. This disclosure generally can be discontinued after 10 years and even sooner if the information loses significance because of the company’s subsequent success.
In the event that later developments indicate that the write-down of an asset during a quasi-reorganization was excessive, gains achieved over the new carrying value be credited directly to Paid-In Capital rather than reported on the income statement. The purpose of this requirement is to prevent a firm from using excessive write-downs to disclose higher income in the future from lower depreciation expense and larger gains on disposal.
The below example shows the disclosures provided by Atec, Inc., subsequent to its accomplishment of a quasi-reorganization.