Occasionally, a corporation may repurchase its stock with the intent to retire it rather than to hold it in the treasury. Essentially, a corporation retires its stock for some of the same reasons that it purchases treasury stock. Like treasury stock transactions, income or loss for the current period is not affected, nor can retained earnings be increased when capital stock is retired.
Where state laws and the corporation’s bylaws allow it, the board of directors can vote to retire shares of stock. This action goes beyond the acquisition of treasury shares by actually removing them from the issued category.

After appropriate approvals, the corporation may act to acquire shares for the purpose of retiring them. The journal entry to record the acquisition and retirement includes debits to the Capital Stock account for the stock’s par value (or its equivalent) and the Capital in Excess of Par account (or its equivalent) for the amount of claims created in excess of the par value.
A credit is recorded to Cash account for the amount paid. If the original issue price exceeds the amount paid, the remaining credit should be recorded in the Additional Paid-In Capital account. If the issue price is less than the amount paid, the remaining debit should be made to the Retained Earnings account.
To illustrate the entries, assume that the Sample Company purchases and retires 1,000 shares of $20 par value common stock that was issued originally for $25 per share. If only $22 per share is paid to acquire them, this entry would be made:

The credit to Additional Paid-In Capital shows that $3,000 of claims attributable to these shares of stock are now held by the remaining owners. If the price paid is $33 per share, this entry would be made:

The debit to Retained Earnings reflects the position that the $8,000 was paid to satisfy stockholder claims that had arisen through operating activities subsequent to the issuance of the shares.
Shares are acquired for retirement in three circumstances: redemptions, calls, and special purchases. Each situation is discussed below.

Redeemable stock (virtually always preferred shares) gives the owner the right to sell the shares to the corporation according to a prearranged schedule of prices and times. This arrangement tends to reduce the investor’s risk of a decreased market value. Some companies have issued mandatory redeemable stock which must be turned into the company by a specific date. This arrangement essentially creates a maturity date and causes the preferred stock to be very much like a liability.

Callable stock (virtually always preferred shares) gives the corporation the right to buy the stock from the owner according to a prearranged schedule of prices and times. This arrangement permits the corporation to retire the shares and avoid future dividend payments. In order to make the callable shares marketable, the corporation typically agrees to pay (at time of call) not only par value but also an amount in excess of par known as the call premium.

Occasionally, a corporation’s board of directors will vote to execute a special purchase of noncallable stock with the express purpose of retiring the shares rather than holding them indefinitely as treasury stock. This situation is typically encountered only in companies with relatively few stockholders.

Accounting for the Retirement of Treasury Stock

Accounting for the retirement of treasury stock depends on the original issue price and the price that must be paid to retire it. For example, assume that the Kishi Corporation issued 10,000 shares of $10 par value common stock at $25 per share and made the following entry to record this issue: 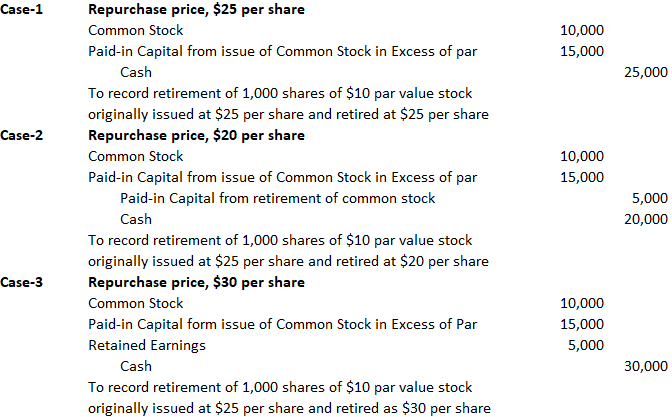 Methods for the Retirement of Treasury Stock

On other occasions, the board may decide that shares of treasury stock should be formally retired and thus removed from the issued category. Whether this action is possible depends on state laws. If it is allowed, the journal entry depends on the method used to account for the acquisition of the shares.

If the cost method is used, the entry is the same as for retirement except that the Treasury Stock account is credited instead of the Cash account. For example, assume that 1,000 shares of $20 par value common stock (originally issued for $25) are held in the treasury. If their cost is $22 per share and they are retired, this entry would be made:

if the ts $33 per share, this entry would be recorded:

The reasons for crediting Additional Paid-In Capital and debiting Retained Earnings are the same as for retirements of newly acquired shares.