Parts of a Worksheet

A description of these parts, each of which consists of several elements, is given in the next sections.

The heading of a worksheet consists of three parts:

A worksheet’s body contains a large column for the names of accounts, along with 10 money columns (or 5 pairs), each pair consisting of a debit column and credit column. The 5 pairs of money columns are arranged in the following order: 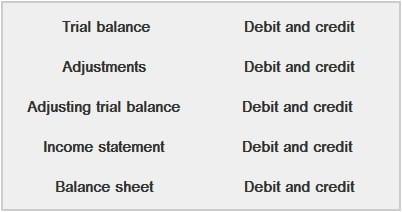 Later on, with practice, it is possible to eliminate the adjusted trial balance columns. In that case, the worksheet will contain 8 money columns instead of 10 money columns.