The debt-to-capital ratio is a measurement of a business’s total debt against total capital. This can be used to determine how much leverage a business has.

It is simply the total amount of a company’s debt divided by its total capital.

What Is the Use of Debt-To-Capital Ratio?

The debt-to-capital ratio can indicate whether or not a company will be able to pay back the interest on those loans, and if it will have enough money left over for other investments such as research and development or acquisitions.

It may also indicate that a company has too much debt and should consider selling off assets in order to reduce its liabilities and level out this ratio.

Company managers and investors might also consider using the debt-to-capital ratio to compare businesses within an industry.

The formula for calculating the debt-to-capital ratio looks like this: 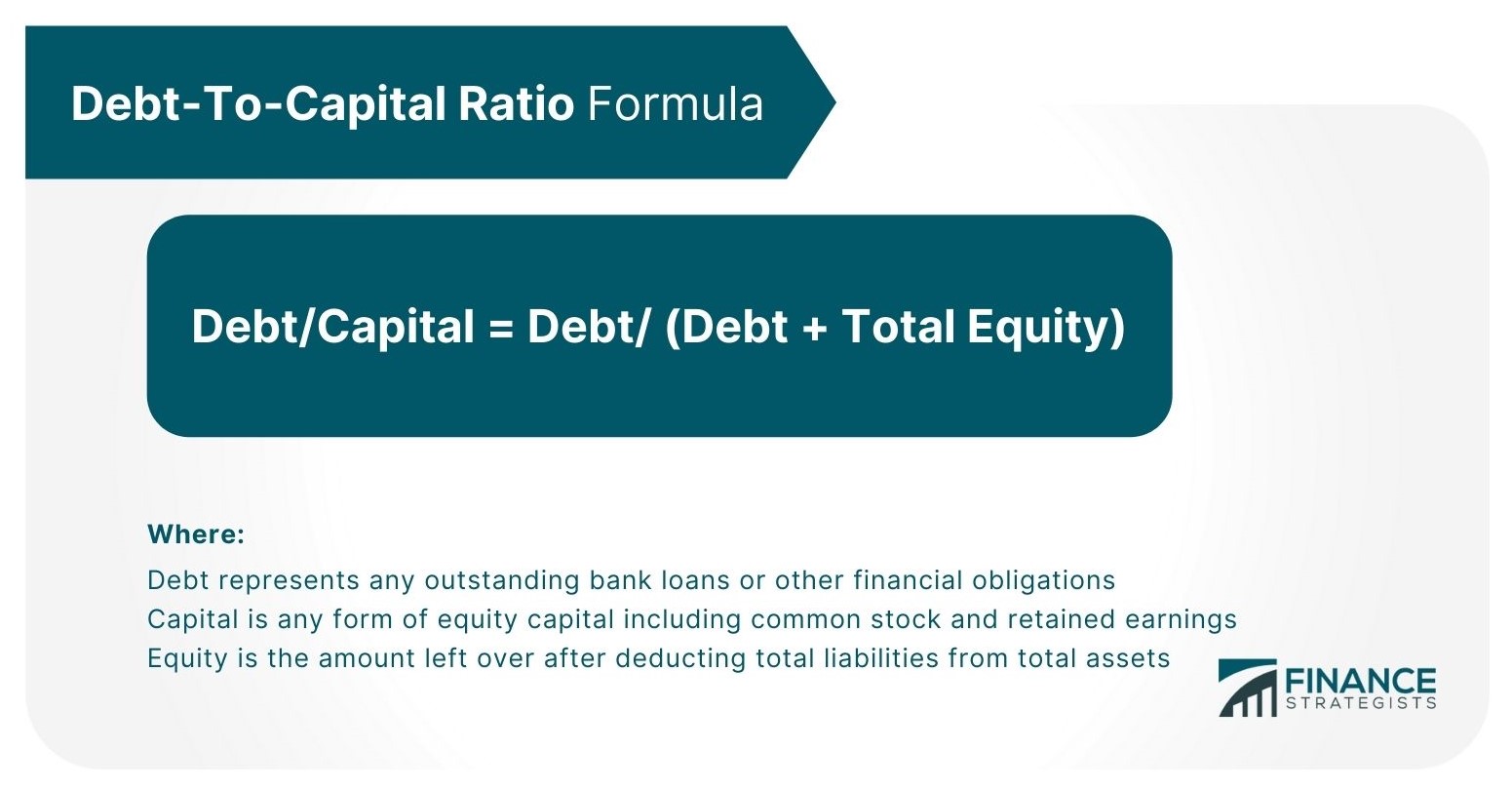 While a debt-to-capital ratio can be calculated for pretty much any company, here’s an example of what the calculation looks like when it’s been used in practice.

The debt-to-capital ratio would be calculated this way:

This means that 37.5% of Company ABC’s operations are funded using both short-term and long-term debts.

When Is a Debt-To-Capital Ratio Considered Favorable?

Generally, the higher the debt-to-capital ratio is, the riskier it is for a business. If the ratio is too high, it may indicate that the company’s earnings are not enough to cover the cost of its debts and other liabilities.

However, if a business has a debt-to-capital ratio below 50%, it may be able to make larger investments in its future without having to use as much equity financing.

Some businesses also choose to finance almost all their operations using loans or other forms of debt because it can reduce their tax bill. These companies should have a lower debt-to-capital ratio than those that do not take advantage of these tax benefits.

A company’s debt-to-capital ratio is considered favorable if it’s lower than the industry average and the interest expenses on their debts don’t eat up too much of their profits.

Company managers can compare a firm’s debt-to-capital ratio to those of other companies within an industry, as well as against averages for all businesses.

This means that both will give you information about how risky or financially stable a company is, but each one can also tell you something different about that business’ operations and funding.

The debt-to-capital ratio can help give you an idea of how risky or secure a business is, but it only analyzes two financial concepts.

Businesses with equal debt-to-capital ratios may have very different debt profiles and this could make it difficult to make comparisons between them.

For example, one business may have a lot of bank loans secured by physical assets while the other uses credit cards to finance its ongoing operations.

The debt-to-capital ratio is a useful financial ratio that measures the amount of debt a company uses to finance its everyday operations.

It can also be used as a benchmark tool for determining whether a firm has too much or too little outstanding debt.

Because this ratio is based on information from a company’s balance sheet, it has its own limitations.

This is not a very ideal liquidity ratio to be used by businesses without strong balance sheets, such as startups or those prone to seasonal cash flow fluctuations.

Even so, the debt-to-capital ratio is worth analyzing because it can help show you how well your business manages its finances and what areas it needs to improve in order to stay competitive over time.

The debt-to-capital ratio is the firm's total liabilities as a percentage of its capital or equity and represents how risky it is to finance a company's operations using only loans and other forms of external financing, rather than by issuing shares or paying off debts with retained earnings.
The formula for calculating the debt-to-capital ratio looks like this: Debt/Capital = Debt/(Debt+Total Equity)
A company may have favorable debt-to-capital ratios if they offer credit to their customers and get paid within 60 days. They can then pay off the money they owe on that credit by using their cash flow from sales or simply waiting until it automatically gets applied to their accounts receivable. They could also have a favorable debt-to-capital ratio because they sell a lot of products, which means high sales turnover and therefore more funds available in the future for paying off debts.
Industry averages are helpful when benchmarking, but what matters most is how your company's debt-to-capital ratio compares to its competitors. Use industry information as a starting point for determining whether you should focus on reducing your debt-to-capital ratio, increasing your capital levels, or both.
The debt ratio measures how much of a company's assets are financed by its liabilities, with an asset being defined as anything that holds value for what it can be exchanged. On the other hand, the debt-to-capital ratio looks at the amount of liabilities that are used to finance a company's operations, which can help you determine how risky it is to finance your business with only loans.