What Is EBIT and How Is It Calculated?

There are many acronyms that are used on a daily basis by accountants and tax preparers.

One of the most common ones is EBIT, which stands for earnings before interest and taxes.

This figure is important because it serves as an indicator of how profitably a given company is operating.

How to Calculate EBIT

EBIT is calculated by subtracting all other expenses from gross revenue except for interest and taxes.

It is also called operating earnings, operating profit, and profit before interest and taxes.

This number is used to analyze the profitability of the core operations of a company without factoring in the added costs of the capital structure and tax expenses, which is why it is also called operating earnings.

Still another name for EBIT is operating income, since both of them exclude the cost of interest and taxes (However, there are times when operating income can differ from EBIT). 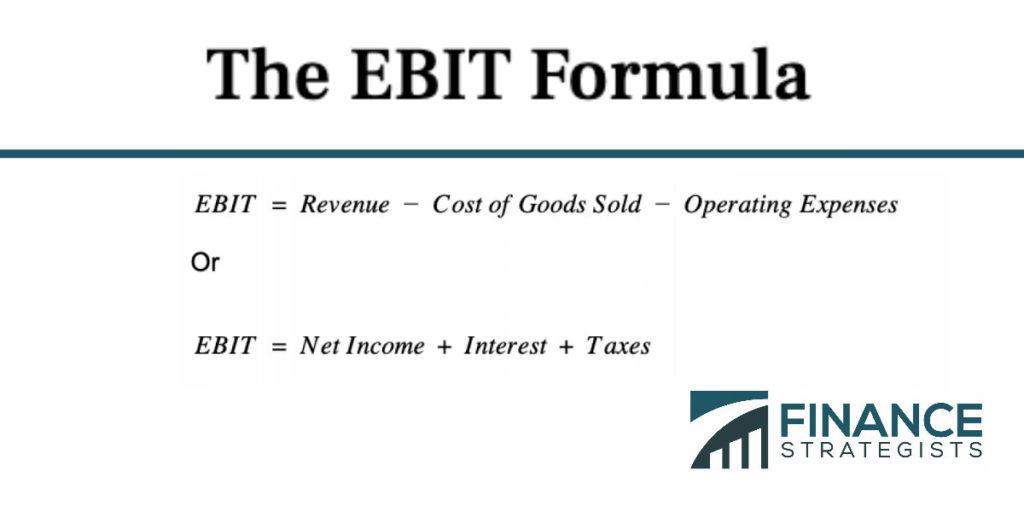 The EBIT calculation takes into account the total costs associated with manufacturing its goods, including the cost of raw materials and operating expenses, which include the wages paid to the employees.

These amounts are then added together and subtracted from revenue to get the true amount of EBIT.

EBIT is thus calculated by following these steps:

What Does EBIT Measure?

Earnings before interest and taxes serves to measure the amount of profit that a company takes in from its operations.

Since it ignores the additional expenses of interest and taxes, it zeroes in on only the amount of earnings that the company is generating through its operations.

This number is critical to investors and financial analysts because it reveals whether the company is able to consistently generate a profit, pay off its debts and fund its operations.

Factoring Taxes Into the EBIT Equation

EBIT is also useful for analysts and investors who are comparing companies with different tax structures.

They can use this number to get an apples-to-apples comparison of their respective profits over time.

For example, if you are considering whether to buy shares of stock of a given company, then EBIT will provide you with a more reliable bottom line number than you could get with taxes and interest factored in.

If the company receives a large tax break from the government, then its overall profitability will increase-even if its operations are still generating a loss.

EBIT ultimately shows how well a company is being run. If it can generate a profit through operations alone, then it’s probably a solid company.

But if it depends on tax breaks and other external factors in order to make money, then it may be less desirable as an investment.

EBIT and the Debt Factor

EBIT is also a useful number when analyzing companies that are in capital-intensive industries such as oil and gas production.

Companies in this type of industry always have a large volume of fixed assets on their balance sheets, which include items such as office buildings, factories and warehouses as well as operational equipment and other assorted elements of production.

The cost of all of these things is typically covered with debt financing.

This means that their interest expenses are higher than those of companies in other types of industries.

EBIT therefore allows investors and analysts to accurately measure and compare a company’s true margin of profitability and earnings potential without factoring in the cost of interest on the company’s loans.

Suppose you are interested in buying shares of stock of a particular company that produces oil and gas at the wellhead.

You can calculate EBIT as follows: 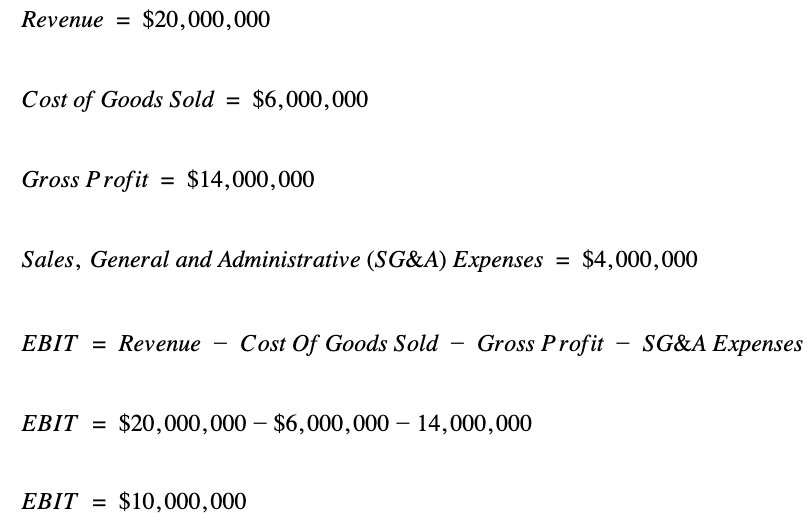 EBIT is not a metric that falls within GAAP (generally accepted accounting procedures) guidelines, and it is also not usually found on a company’s balance sheet or other financial statements.

As mentioned previously, EBIT can differ from operating income if a company has non-operating income, such as interest generated by investments owned by the company.

This type of income can be included when calculating EBIT, but it cannot, by nature, be counted as operating income.

And the source of any interest that a company receives may also be counted as operating income.

For example, a credit card company can count the interest that its customer pay on their credit cards as operating income because lending is their primary function.

But a company that makes steel probably would not count investment interest earned from its bond portfolio as operating income, because bonds are not its primary source of revenue.

Investors and analysts can apply these additions and subtractions at their own discretion depending on the type of analysis they are performing.

Unlike its cousin EBITDA (earnings before interest, taxes, depreciation and amortization), EBIT factors the depreciation of fixed assets into its formula.

This can effectively skew a comparison between a company with few or no fixed assets versus one that has a substantial amount of them.

Depreciation is an ongoing expense that reduces a company’s profitability, so this should be taken into account when comparing companies that have this kind of difference. (This is one of the reasons that EBITDA is often used.)

EBIT can also artificially inflate the earnings of a company that has a large amount of debt, because it does not factor interest paid on debt obligations into its formula.

This means that companies with high levels of debt will appear to be more attractive at first glance than they really are, because EBIT only takes into account the profitability of a company’s core operations.

EBIT is one of the important key indicators of a business’ operating efficiency. Talk through a financial advisor in Horseshoe Bay, TX on how you can work around your EBIT so that your business becomes more profitable. If you live outside the area, please check out our financial advisor page to see the list of areas we cover.

EBIT stands for Earnings Before Interest and Taxes.
Earnings before interest and taxes serves to measure the amount of profit that a company takes in from its operations.
Since EBIT ignores the additional expenses of interest and taxes, it zeroes in on only the amount of earnings that the company generates through its operations.
EBIT can also artificially inflate the earnings of a company that has a large amount of debt, because it does not factor interest paid on debt obligations into its formula.
This formula also takes into account the effects of depreciation and amortization, which sometimes makes for a fairer comparison between companies.