What Are Initial Public Offerings (IPOs)?

Initial Public Offerings (IPOs) are the first sale of stock by a private company to the public. Companies can use it to raise new equity capital for expansion or other purposes.

IPOs are often associated with high-growth companies, and there are several reasons why companies may choose to go public. Going public can provide a company with new capital to invest in growth, help to expand its operations, and make it more visible to potential customers and partners.

When a private company goes public, it is an opportune moment for original private investors to profit from their investment. This is usually done by issuing shares at a premium price, which lets public investors get in on the action too.

How Do IPOs Work?

When a firm reaches a certain point in its development where it needs to raise capital, one option it may consider is an initial public offering.

A private company going public raises money by issuing and selling shares of itself in a process called an IPO. It is a massive undertaking for a private company because it must now answer to shareholders, provide regular financial reports, and comply with the Securities and Exchange Commission (SEC) regulations.

The company also undergoes a significant change in ownership structure, from private ownership to public ownership.

Typically, when a company’s private valuation reaches around $1 billion, it is often ready to go public. This is known as unicorn status. Private firms at various valuations with strong fundamentals and demonstrated profitability potential can also qualify for an IPO, depending on the market competition and their capacity to satisfy listing standards.

To pull off an IPO, the company must first determine how many shares to sell and at what price. This is done through a process of share underwriting, where investment banks commit to buying up the securities of the issuing entity and then sell them in the market.

Overall, an IPO is a significant event for any company. It is a complex process that requires careful planning and execution. But it can also be rewarding, providing the company with much needed capital to grow its business.

IPOs have been around for centuries. In 1602, the Dutch East India Company was the first company to offer shares to the public.

There have been many notable IPOs throughout history. Some examples are the First Bank of the United States IPO in 1791 and the IPO of The Coca-Cola Company in 1919.

One notable example of a modern company that went public through an IPO is Facebook. Facebook’s IPO took place on May 18, 2012. Facebook’s IPO was the most significant in the history of technology IPOs.

Today, IPOs are a common and critical source of capital for high-growth companies. In 2019, there were more than 1,000 IPOs globally, raising a total of more than $100 billion.

The process of going public can be complex and time-consuming, and it typically involves the services of investment bankers, lawyers, and accountants.

The following are the steps involved in the IPO process:

The first step is to develop a proposal or so-called “book” that outlines the company’s business plan, financial situation, and investment opportunity. This book is then sent to potential underwriters, who are banks or securities firms that help sell the stock to investors.

The agreement also typically includes an “over-allotment option,” which gives the underwriter the right to purchase additional shares (up to 15% of the total offering) if demand for the stock is high.

After the underwriting agreement is in place, the IPO team (which typically includes investment bankers, lawyers, and accountants) works on putting together the necessary paperwork for the SEC filing.

After the SEC has cleared the offering, the underwriter will go on a “road show” to market the stock to potential investors. During this time, the company’s management team will meet with institutional investors, such as mutual fund managers and pension funds, to try to get them interested in buying the stock.

The investment banks set the IPO price based on their assessment of investor demand. Once the offering price is set, the company will sell its shares to the underwriters at that price.

The shares are then distributed to the underwriters’ clients, and trading of the stock begins on the open market. Institutional investors often buy large blocks of stock when a company goes public, so they can sell them later at a profit. Individual investors can also participate in IPOs by buying shares through a broker.

After an IPO, some clauses may be put into place- for example, underwriters may have a set amount of time to buy more shares after the IPO date. However, certain investors might fall under quiet periods during this time.

The company will then be required to file periodic financial reports with the SEC. The company’s stock will also be listed on a stock exchange, such as the NYSE or Nasdaq. The company will now be subject to all the rules and regulations that apply to public companies. 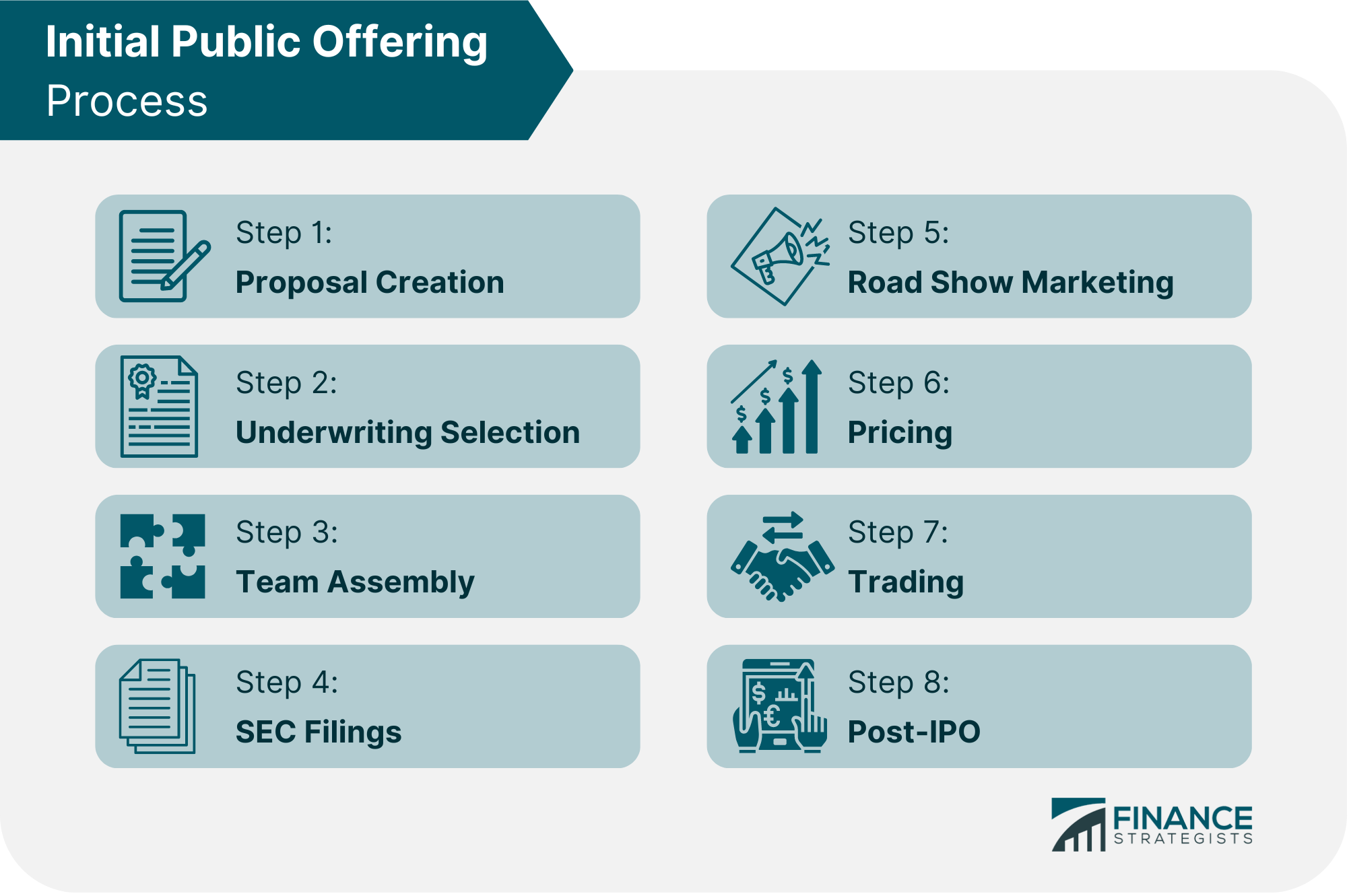 Benefits of an IPO

IPOs can provide a number of benefits to companies, including the following:

IPOs can be a significant source of capital for high-growth companies. The proceeds from an IPO can be used to finance expansion, pay off debt, or for general corporate purposes.

Going public can increase a company’s visibility and give it more credibility with customers, suppliers, and employees. It can also make it easier to attract top talent.

An IPO can create shareholder value by providing liquidity for early investors and founders and by giving the company access to a larger pool of potential investors.

Drawbacks of an IPO

Some risks and drawbacks are associated with going public via an IPO.

The IPO process can be costly and time-consuming, and there is no guarantee that the offering will be successful. Costs are borne by the company, not the underwriters.

Once a company goes public, it will be subject to increased SEC scrutiny and will be required to disclose more information about its business. This can make it more difficult to operate in a competitive environment.

Going public typically means that a company will have to give up some control. For example, shareholders will have a say in major decisions, and the company will be subject to greater scrutiny from regulators, the media, and the public.

The stock price of a newly public company can be volatile, particularly in the first few months after the IPO. This can create concerns for management and make it difficult to raise additional capital.

Public companies are under pressure to maintain or increase their stock price and meet quarterly earnings estimates. This can lead to short-term decision making and pressure on management.

Several factors can affect the performance of an IPO, including the economic conditions at the time of the offering, the company’s financial condition, the sector in which it operates, and investor sentiment.

In general, IPOs tend to perform poorly in bear markets and during periods of economic uncertainty. They also tend to underperform the market in the short term, but there is evidence that they outperform over the long term.

The following are some of the key considerations for IPO performance:

The lock-up period is the time after the IPO when insiders (such as employees and early investors) are prohibited from selling their shares. This period typically lasts 180 days, with a minimum of 90 days per SEC law. After the lock-up period expires, a “flood” of insider selling can put downward pressure on the stock price.

The SEC’s “quiet period” regulations restrict a company’s ability to promote its IPO in the weeks following the offering. As a result, there is typically a lull in news and excitement surrounding a company in the weeks before its IPO. This can lead to lower than expected demand and poor performance on the first day of trading.

Flipping is the practice of buying shares in an IPO and then selling them immediately after the stock begins trading. This can lead to a decline in the stock price as demand from long-term investors is replaced by supply from flippers looking to make a quick profit.

Several companies have filed for IPOs in the last few months. Some of the more notable ones include:

It has not announced an IPO date yet but is expected to do so in the near future. This will be a highly anticipated event, as Discord has a large and loyal following.

Reddit filed confidentially for its IPO in late 2021, which indicates that it would be one of the largest IPOs in 2022.

To stay updated on upcoming IPOs, check out an IPO calendar, which lists all of the upcoming IPOs. They can be found on many different websites, such as Yahoo! Finance and Nasdaq.

Another way to find out about upcoming IPOs is to sign up for email alerts from sites like IPO Monitor. This way, you will be among the first to know when a new IPO is announced.

An IPO can be an excellent way for a company to raise capital, but it also comes with some risks and drawbacks.

The advantages could include a large influx of cash for the company, increased visibility, and a boost in prestige.

The disadvantages could include giving up some control of the company, higher expenses, and greater scrutiny.

Before going public, a company should carefully consider the pros and cons of an IPO and ensure that it is the right move for the business.

IPOs are not first come, first serve. Instead, they are allocated based on demand from investors.
There is no guaranteed answer, as it depends on the company and the market conditions at the time of the offering. IPOs tend to underperform in the short term but outperform over the long term.
The primary benefit of buying an IPO is that you get in on the ground floor of a company with high growth potential.
You can make money from an IPO by buying shares at the IPO price and then selling them later at a higher price. During the first public offering, investors typically purchase firm shares at a price below the market price. Then, during the public auction, the value of the business's shares may increase. If the company is already well-established worldwide, its initial public offering may generate a frenzy and price surge.
IPOs are considered high risk because the company has no track record, and its stock price can be unpredictable in the early days of trading.