What Is Net Income?

Net income shows how much money a company is making after subtracting all expenses.

It can also be referred to as “net profit“or “the bottom line.”

Net Income is usually found at the bottom of a company’s income statement.

Examples of expenses that must be subtracted from a company’s total revenue include debts, cost of goods sold, interest, operating costs, depreciation and taxes along with other expenses unique to that company as well.

Sometimes, a company may have additional streams of income such as interest on investments that must be accounted for as well when calculating net income.

Net income is different than other forms of profit because the former accounts for all money flowing in and out of the company, while profit usually only accounts for one type of expense.

Net income, on the other hand, takes all expenses into account and thus is regarded as a very holistic and useful way to see how a company’s total profit, especially over time.

How to Calculate Net Income

To calculate net income, one must start with a company’s total revenue over a period of time, then tally up all of that company’s expenses over that same time period.

Then, subtract that number from the total revenue. 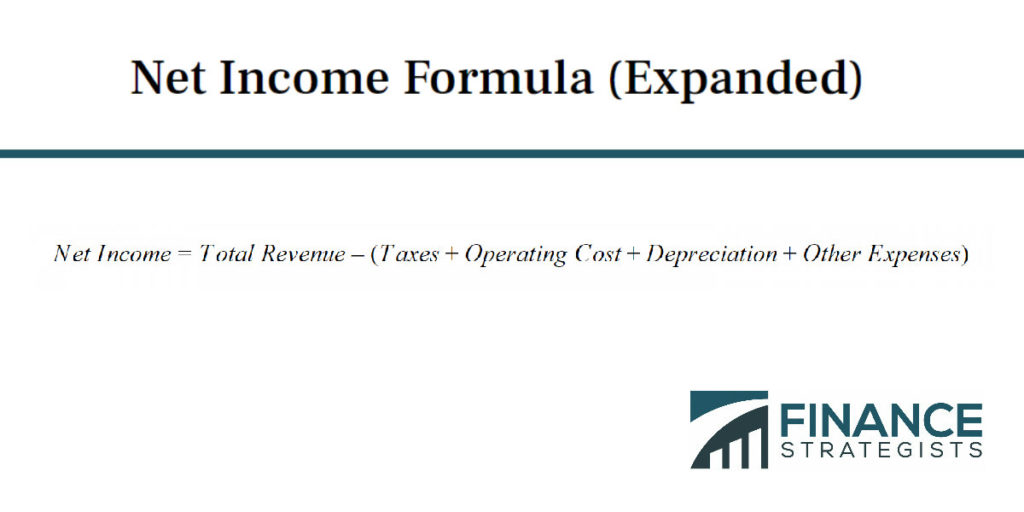 Calculating net income shows whether or not a company is profitable.

Earnings is another term to refer to net income, particularly after-tax net income.

Earnings are a major factor in determining the share price for a company and thus are studied closely.

They can help analysts evaluate the overall health of a company and its ability to turn a profit by quarter or by year.

Where Net Earnings Are Used

Earnings are used in many financial metrics such as return on equity, earnings per share, or price-to-earnings ratio.

How to Find Net Income

Net Income is often calculated by a company when it generates its quarterly or annual income statement, on which the net income is usually featured at the bottom, which is how the term gets its nickname of “bottom line.”

If a net income is not shown for some reason, it is easy to calculate using the equation above.

Gross income helps one determine how much total income he or she has before taxes.

Gross income can be calculated using a person’s total earnings, including those which are not taxable.

Net income, on the other hand, refers to a person’s income after factoring in taxes and deductions.

For a person making over $50,000 per year, for instance, there can be a several-thousand-dollar difference between net income and personal gross income.

What Is Net Income FAQs