What Is a Prenup?

A prenuptial agreement, or simply prenup, is a contract entered into by two people before they get married.

Prenup intends to establish what should happen to their assets (as well as any liabilities) in the event of death or divorce. It is considered to be a legally binding document that can vary in construction depending on the state in which it is created.

A prenup is also referred to as an antenuptial agreement, prenuptial contract, or premarital agreement.

Generally, prenups can be useful for both wealthy and modest couples, as they can help protect assets and wealth earned before marriage.

If a prenuptial agreement is designed deliberately and fairly, it can be useful for wealth planning and protection. It works well to prevent some assets, obtained before marriage, from being divided between a couple during a divorce.

Protection for Children From Previous Marriages

A lot of prenuptial agreements are used to define property rights for second marriages.

Protecting your children’s rights to your assets and property may be important if you had children from a previous marriage.

By defining the assets that should remain separate from the marriage in a prenuptial agreement, you can preserve those assets in the event that your marriage ends.

By combining this with sound estate planning, you can make sure that premarital property goes where you desire.

Prenups can also provide debt protection. This means that if a spouse incurs a lot of debt before the marriage, that debt will remain their responsibility even after the marriage.

Additionally, couples can decide how to handle debts incurred during the marriage. This is important for couples with a lot of financial debt.

Finances are often a big problem during a divorce, so sorting this out ahead of time can be helpful and cost-effective.

A prenup should protect the assets of both parties. It is important that couples must be fully transparent when creating the contract so that all assets, and liabilities are accounted for.

Ensure that the contract is entirely conscionable to help ensure that it is fair. Therefore, couples should refrain from making any irrational and unethical demands and unjust ultimatums.

Comprehensive Planning for the Future

The provisions of prenups extend beyond divorce. Even though divorce is the most frequent reason a couple uses a prenup, this agreement can also detail what would happen in the event of a spouse’s passing or incapacity.

Some couples use prenups as a way to establish financial rules and expectations for their marriage. This can help prevent money problems down the road.

Prenuptial agreements date back to ancient Egypt, where couples would sign contracts making sure that wives were provided for if their marriages failed.

These contracts, which can be found in many different cultures, typically entail the exchange of money or other assets between the family of the bride and the groom. One of the oldest examples is the 2,000-year-old Hebrew marriage contract, known as Ketubah.

Later on, prenups were no longer just about providing for a wife in case of divorce but were also used to protect the assets of the wealthier spouse.

It was not until the late 18th century that prenups began to take off in the Western world.

Today, prenuptial agreements are commonplace in many countries, particularly in the United States. It is often seen as a practical way to protect oneself in case of divorce.

Ownership Rules That Apply Without Prenups

If you do not have a prenuptial agreement in place, the state laws will dictate who owns any assets you earn during the marriage and what happens to them in the event of a divorce or death. This can include property you had before getting married.

The law views marriage as a contract between spouses. In the absence of a prenuptial agreement, this contract gives each spouse certain automatic property rights. These rights may include the following:

The prenuptial agreement cannot cover all aspects of marriage. It is important to be aware of its limitations before creating the prenup. Prenups do not include: 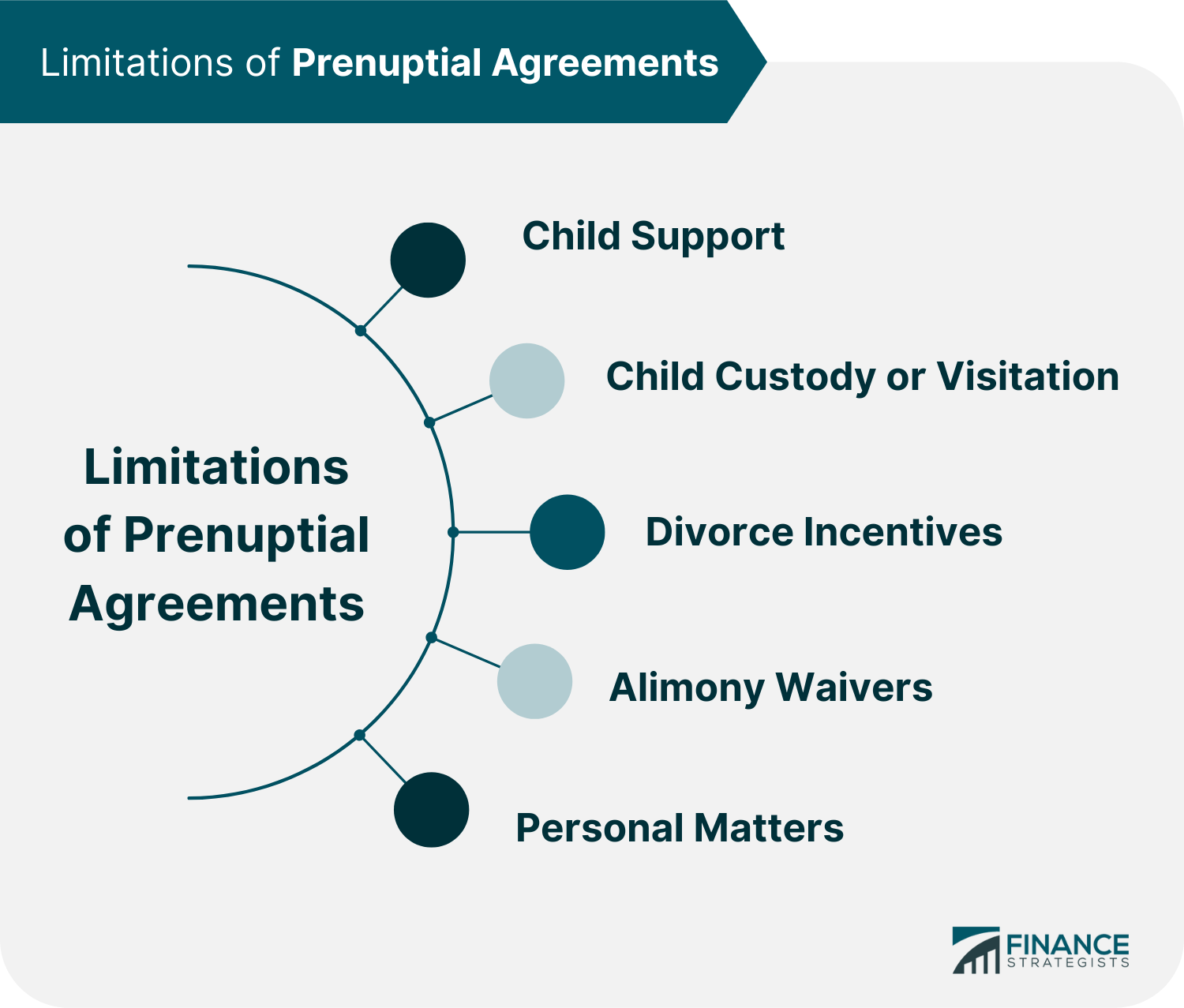 Your prenuptial agreement typically cannot include anything pertaining to your future children. When determining child support, the court has the final word.

Child support is decided by the court using a “best interest of the child” standard, which considers a number of different factors.

Child support issues are matters of public policy. Hence, a court would never uphold a prenuptial agreement clause that addressed them.

The right of a child to receive financial support will not be denied, and the court retains the legal authority to determine what is in the child’s best interests.

Like child support, a prenuptial agreement dealing with child custody or visitation would never be upheld by a court because these are matters of public policy.

The court further retains the authority to determine what is in the best interests of the child and will not forbid a child from establishing a relationship with a fit parent.

Judges carefully review prenuptial agreements to seek anything that can serve as a financial incentive for divorce.

The court will invalidate a clause if it might be interpreted as encouraging divorce.

Judges most frequently invalidate alimony waivers. Several states outright forbid this. Some states frown upon it and restrict your capacity to renounce your alimony rights.

However, alimony waivers are legal in some states. Make sure to research the laws of your state.

Personal preferences, including who does what duties, where to spend the holidays, whose name to use, information about child raising, or how to interact with particular relatives, cannot be included in a prenuptial agreement.

Prenuptial agreements are made to handle concerns on a financial basis. Any clause addressing matters other than money will not be honored.

When a contract contains information about private family matters, judges become apprehensive and frequently pronounce the agreement frivolously and invalidate it.

The average couple will spend between $1,000 and $10,000 on a prenuptial agreement, depending on the complexity of their situation.

Engaging a private attorney is advisable to ensure the agreement is legitimate and enforceable.

The amount of time it takes an attorney to write an agreement depends on the couple’s assets and responsibilities, so those with more complicated assets may be charged more.

Other factors that affect the cost of a prenup include where you reside, how much money each person has in assets and liabilities, how well-known and experienced your lawyer is, and whether or not you engage in prolonged negotiations.

Some people feel that prenuptial agreements encourage couples to view each other as property owners rather than partners. Other moral criticisms of prenups are the following:

Changes the Basic Premises of Marriage

Marriage is intended to be a permanent commitment for as long as both spouses are alive. A prenuptial agreement is basically a contract that outlines what will happen if the marriage does not work out. This can change the fundamental way couples view marriage and make it seem more like a business arrangement than a loving union.

According to research, prenups send the message that couples do not trust each other or are planning for a divorce before they even get married. This can create tension and mistrust in a relationship from the start.

When a man and woman enter into marriage, they become one flesh, wholly unified in all aspects, such as finances, goals, and dreams. A prenuptial agreement can spell out exactly who gets what in the case of a divorce.

This can foster a sense of greed and selfishness, as each spouse is focused on protecting their own assets rather than working together for the good of the relationship.

Acts of selflessness fuel a good marriage. Couples who are always looking out for each other and putting the needs of their spouse above their own tend to have the happiest and most successful relationships.

Prenuptial agreements are almost always one-sided, typically designed to protect the interests of the wealthier spouse. This can create an imbalance in the relationship and foster a sense of selfishness rather than selflessness.

Prenups tend to focus on each spouse’s rights and interests rather than the needs of the relationship.

While there are some moral issues to consider with prenuptial agreements, there are also some situations where they may make sense.

For example, people who are going into a second marriage after the death of a spouse may want to protect their children’s inheritance.

Unique financial situations may come out of blended families and existing business ventures. In order to avoid any future complexity, some couples may feel that a prenup is the best way to protect both parties.

While there may be legitimate situations that warrant a prenup, still prenups should never be driven by greed or a lack of trust.

Prenuptial agreements are legal contracts that outline the financial rights and responsibilities of a married couple in the event of divorce or death.

Prenups can be beneficial for couples who want to protect their assets, but they often come with moral criticisms. Prenups may send the message that couples do not trust each other or are planning for a divorce, and they can foster greed and selfishness.

Couples entering into marriage should first and foremost make sure that they are ready to commit to and trust each other fully.

If a prenup makes sense for their situation, they should make sure it is fair and balanced, and that it is not driven by greed or a lack of trust.

If you are considering a prenuptial agreement, it is important to speak with a lawyer or a financial advisor to ensure that you are making the best decision for your unique circumstances.

A prenup is a legal contract that spouses sign before getting married. Prenups typically state how assets and liabilities will be divided in the event of a divorce, death, or incapacity.
Prenups may be most beneficial to couples with unique financial situations, such as the case of blended families or existing business ventures. Prenups avoid the complexity that can come with these situations.
The cost of a prenup depends on the complexity of the agreement and the amount of assets involved. Prenups can range from $1,000 and $10,000. Prenups are typically cheaper if they are simple and there are not a lot of assets involved. More complex prenups can cost more.
Some people believe that prenups are immoral because they can foster greed and selfishness. Prenups also change the basic premise of marriage. These are all moral issues that couples should consider before signing a prenup.
The original purpose of prenups was to ensure that wives would be taken care of financially in the event of the death of their husbands. Nowadays, prenups are usually made to protect each spouse's assets in the event of a divorce, incapacity, or death.