What Is a Sovereign Wealth Fund (SWF)?

A Sovereign Wealth Fund (SWF) is a large pool of capital managed by a country’s government to achieve specific economic and social goals. These funds are invested in various assets such as stocks, bonds, real estate, commodities, and other financial instruments.

SWFs are typically funded from the savings of state-owned enterprises, foreign currency reserves from central banks, or commodity exports. The size and composition of each SWF can vary significantly between countries based on their respective economic circumstances.

Each country has various reasons for setting up an SWF. However, the most common purpose of establishing one is to diversify and protect a country’s economy. For instance, this fund can be used as emergency reserves for potential future global financial shocks.

Purpose of a Sovereign Wealth Fund

Sovereign wealth funds invest a country’s wealth to achieve the government’s economic and social objectives. These funds provide countries with an additional method to diversify their economies and reduce risk exposure.

They also give governments a chance to invest in global markets outside their own countries, which can get them better returns on their investments. This increases the earning potential on foreign exchanges and provides additional economic stability.

Furthermore, SWFs are a valuable tool to help countries build up buffers and savings for future generations to be better prepared for future economic shocks. Proper use of SWFs leads to long-term economic growth and stability.

In addition to providing an alternative form of investment for governments and enterprises worldwide, SWFs have also been used to increase financial transparency and accountability in many countries.

By making their investment decisions public, these funds help promote corporate governance standards across the globe. This encourages market stability and reduces risks associated with certain types of investments.

SWFs can be categorized into different types according to their purpose, and the most common types include:

These funds are designed to provide financial stability during times of economic crisis and help prevent potential recessions. They are typically funded from the profits of commodity exports, foreign currency reserves, or taxation surpluses.

The need to use these funds also arises when there is a significant change in the international market, an oil or natural resource price hike, or social and political instability that could affect a country’s economy.

When this happens, governments use the funds to help stabilize their currencies and mitigate the potential impacts of said event.

These funds aim to ensure that the current generation does not deplete their savings and to create a buffer for future generations in case of economic shocks or other unexpected events.

In addition, countries establish this fund to meet the expenditures associated with the aging population. It reduces the burden on the government’s budget in the coming years.

The primary objective of the account is to generate funds that can be invested in high-yielding long-term investments. These funds are established for various investment purposes where earnings are set for a defined purpose, mainly supporting long-term initiatives.

These funds are mainly used as a reserve for investment opportunities to achieve long-term financial objectives. Additionally, these funds ensure sufficient capital is available for making investments when opportunities arise.

A country’s pension system can be funded through a pension reserve fund. With this fund structure, the government’s budget is not solely responsible for pension payments. This provides a sufficient amount of money available to pay out pensions when they become due.

It also helps governments plan and forecast how much money will be needed in the future. The government also uses this fund to invest in long-term pension schemes for its citizens.

Strategic Development Sovereign Wealth Funds (SDSWF) are created to provide financial support for initiatives that improve economic development. For instance, this type of fund can be invested in physical infrastructure and human capital projects.

Ultimately, an SDSWF’s goal is to increase the prosperity of a country while also generating returns for investors. With these funds, governments can sustain economic development, create jobs, reduce poverty levels and enhance the overall well-being of their citizens. 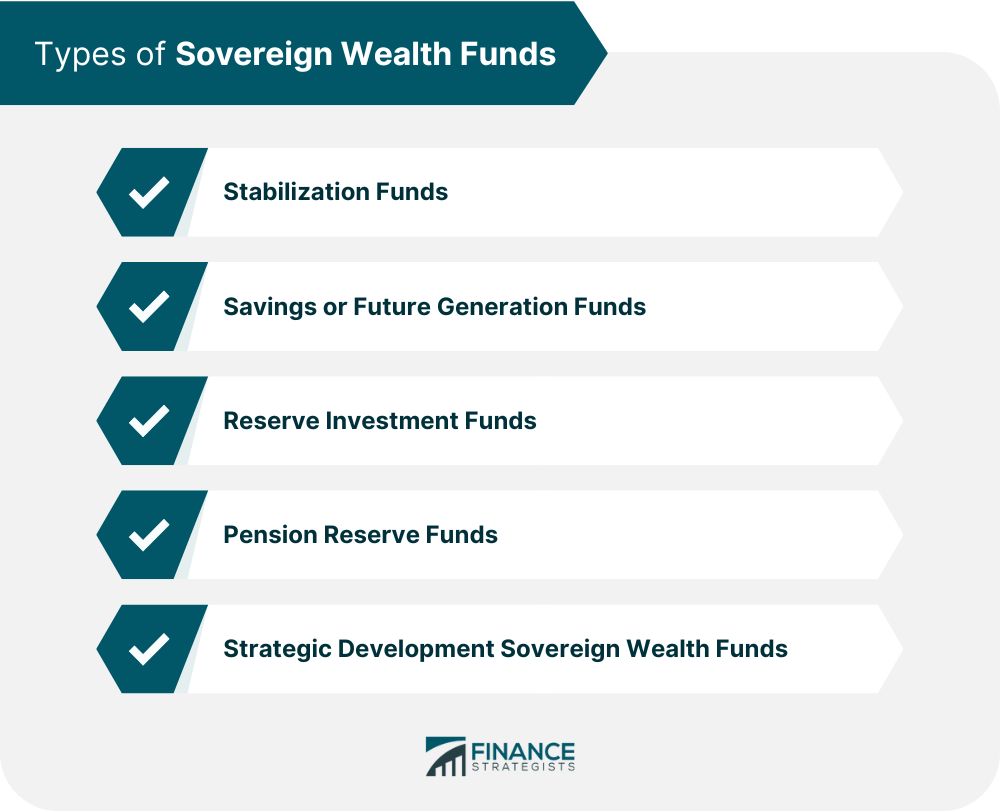 SWFs have become increasingly popular as governments look for ways to maximize investment returns and promote economic growth. The following are the top SWFs worldwide in terms of total assets: 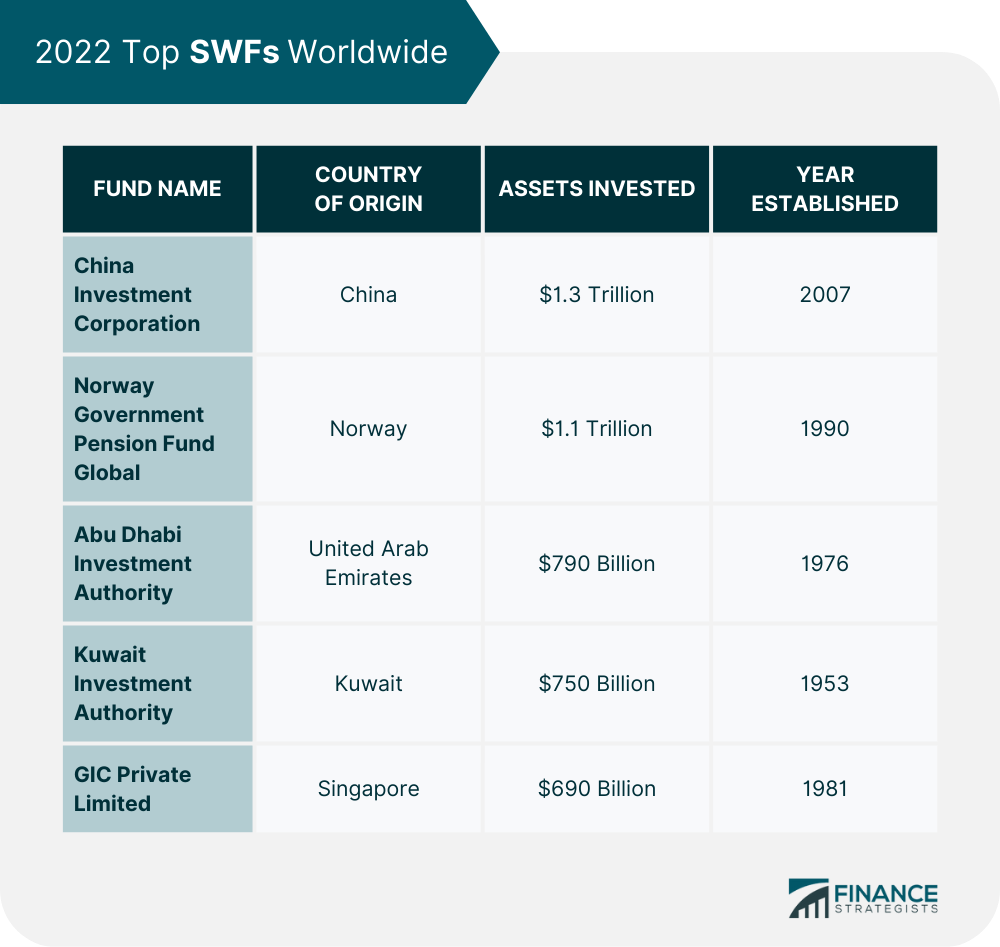 Commodity-based funds are funded using government-owned or taxed exports of commodities. For example, the proceeds from the export of natural resources such as oil, natural gas, or gold can be used to fund a commodity-based sovereign wealth fund.

On the other hand, non-commodity funds are often financed by a transfer from the central bank’s official foreign exchange reserves and rely on external assets to finance their activities.

For instance, these funds help countries diversify their economies to minimize risk. They also allow governments to invest in foreign markets for higher profits. This boosts foreign currency exchange earnings and economic stability.

SWFs can be categorized by purpose or by their source of funding. When divided according to purpose, SWFs can be classified into stabilization funds, savings funds, reserve investment funds, pension reserve funds, or strategic development funds.

When SWFs are grouped according to their source funding, they have two main types: commodity-based funds, which rely primarily on natural resources, and non-commodity funds, which depend mainly on external assets, such as foreign exchange reserves.

Overall, SWFs have become essential to many countries’ fiscal strategies worldwide. This is because these funds help governments protect their wealth while also allowing them to benefit from growth opportunities in global markets.