What Are Uncollectible Accounts?

Those receivables that the firm is unable to collect the full amount due from the customer are called uncollectible accounts.

The primary accounting issue regarding accounting for uncollectible accounts is matching the bad debts with the sales of the period that gave rise to the bad debts. That is, the bad-debt expense should be recognized in the period in which the sale took place and the receivable was generated, not in the period in which management determined that the customer was unable or unwilling to pay. The accounting problem arises because it may be the following year before management discovers that a sale made in the current year will not be collectible. Waiting to record the bad-debt expense in the year following the sale would violate the matching convention.

In order to provide the best matching, the allowance method is used. Under the allowance method, the uncollectible account expense for the period is matched against the sales for that period. This requires estimating the uncollectible account expense in the period of the sale. An estimate is required because it is impossible to know with certainty which accounts outstanding at the end of the year will become uncollectible during the next year. This estimate is usually recorded through an adjusting journal entry at year-end. Although estimates are uncertain, accountants feel that the benefits of applying the matching convention outweigh the problems associated with estimates.

To demonstrate the application of the allowance method, we will first discuss the journal entries that must be made, and then we will examine the different methods used to make the required estimates.

In order to understand the required journal entries used with the allowance method, assume that during 2019, Delta Corporation’s first year in business, sales totaled $1 million. All sales made on credit, and cash collections on account totaled $750,000. After analyzing the ending balance of $250,000 in Accounts Receiveable, management estimated that $12,500 of these accounts would ultimately become uncollectible.

The summary journal entries required to record the sales, cash collections, and the $12,500 in uncollectible accounts are: 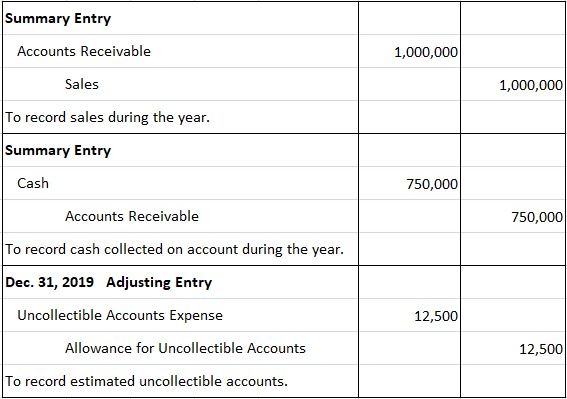 The first two entries are the usual ones to record sales on account and the subsequent collection of cash. However, the adjusting entry on December 31, 2019, to record the estimated uncollectible accounts needs to be explained.

The debit part of the adjusting entry is made to the Uncollectible Accounts Expense account. Another title for this account is Bad Debt Expense, This account is closed to Income Summary and is generally shown as a selling expense on the income statement. However, some firms show this item as a deduction from gross sales in arriving at net sales.

The credit part of the entry is to an account called Allowance for Uncollectible Accounts. This account, rather than Accounts Receivable, is credited because the firm is only making a total dollar estimate of uncollectible accounts and does not know with certainty which particular account will ultimately prove uncollectible. If a firm knows that a particular account is, in fact, uncollectible, it should already have been written off.

Presented below is the current asset section of the Delta Corporation’s balance sheet at December 31, 2019 after the adjusting entry has been made. Because this is the first year of the firm’s operations, the balance in the Allowance account equals the amount of the Journal entry. However, In future years thig may not be the case. 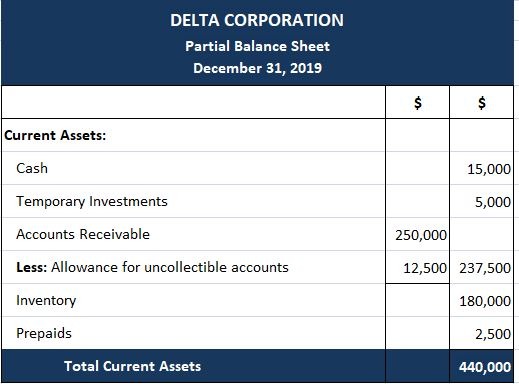 To extend this Illustration, assume that the following events occur in 2020:

As this entry shows, the debit part of the entry is to the Allowance account. The entry is not to the Uncollectible Accounts Expense account because we are assuming that the $6,000 is included in the $12,500 debit to expense as part of the December 31, 2019 adjusting entry. The credit part is to Accounts Receivable—–Corona. This part of the entry must be posted to both the general ledger accounts receivable and to Corona’s account in the subsidiary accounts receivable ledger.

After the $6,000 entry to write off the specific account, the net amount of accounts receivable (Account Receivable less Allowance for Uncollectible Accounts) remains the same, as illustrated below:

In some cases, a customer whose account has been written off will subsequently pay part or all of his or her account. For example, in the Corona case, Delta’s management decided it was prudent to write off the entire balance when Corona entered bankruptcy proceedings. This is because in Delta’s opinion the outcome of such proceedings is uncertain. In November 2020, when Delta received $400 as its full settlement, it had to make the following two entries:

The first entry reinstates Corona’s account receivable in the amount Of $400. This entry is a reversal, in the amount of $400, of the entry to write off the receivable. The second entry records the receipt of the $400.

These two entries should not be combined First, there may be a lag between notification of the intention to pay and the actual receipt of the cash. Second, the two entries create a complete record in Corona’s subsidiary accounts receivable of the actual bad debt. A combined entry would not accomplish this. Finally, an entry, that debits Cash and credits an Allowance account cannot arise from normal external transactions. For internal control purposes, therefore, unusual entries or combination of entries should be avoided.

How to Estimate Uncollectible Accounts Expense

As we have shown, the allowance method is based on the accountant’s ability to estimate future uncollectible accounts that result from current year’s sales. The percentage-of-net-sales method and the aging method are the two methods that have been developed to make this estimate.

Difference between Estimates and Actual Experience

Estimates are inherent in accounting because the accountant attempts to match revenues and expenses. Most individuals feel that the benefits of this proper matching outweigh the disadvantages of using estimates. Furthermore, for stable companies, the amount of receivables and uncollectible accounts tends to be steady from year to year. This point can be illustrated by looking at the following data taken from a recent annual report of J. C. Penney:

The Company’s policy is to write off accounts when the scheduled minimum payment has not been received for six consecutive months, or if any portion of the balance is more than 12 months past due, or if it is otherwise determined that the customer is unable to pay. Collection efforts continue subsequent to write off, and recoveries are applied as a reduction of bad debt losses.

As we have seen, reasonable errors in a prior year’s estimates are adjusted in current and future years; the accountant does not retroactively change a prior year’s statement. However, if estimates such as uncollectible accounts are consistently incorrect, management should reevaluate the method used to make the estimate.